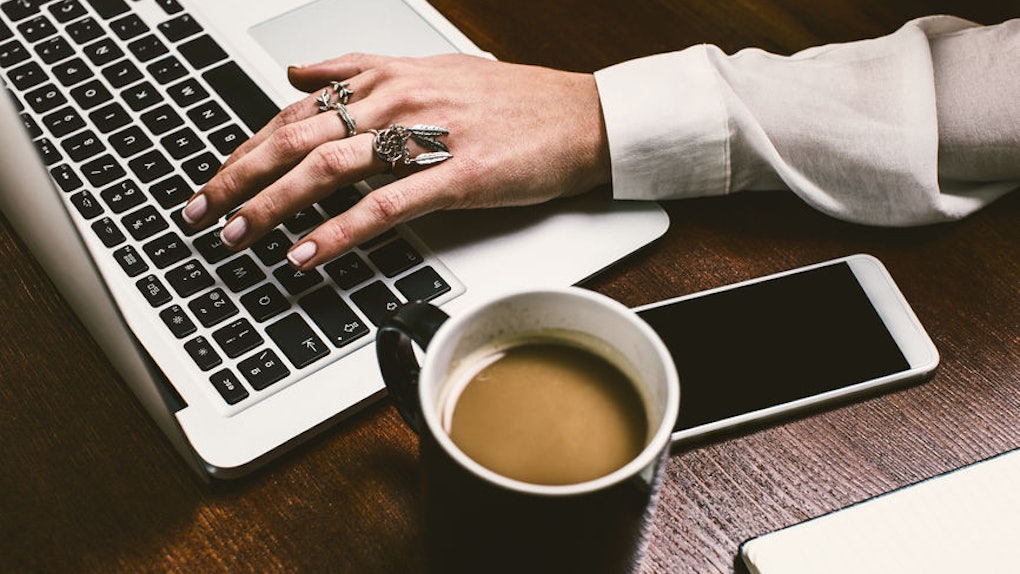 Ah, Virgo season. Can you feel that? I swear, it's like something in the air immediately changes, in terms of our mentality, responsibility, and day-to-day routine. In fact, your career horoscope for September 2018 is legit proof that all the extra grind and hard work we've been putting in thus far has actually served its purpose. 'Tis the season of the harvest, and I sincerely suggest you take full advantage of this magically rich astrological season. Think about it: what would fellow Virgo Beyoncé do? Exactly my point. It's just like the saying, "We all have the same amount of hours in the day as Beyoncé," which technically isn't a lie.

What are you working toward? That motto is so appropriate for Virgo season, too, especially since we're all in the midst of collecting our thoughts, and making our dreams manifest themselves. However, the most important thing to keep in mind during this season is our health. This is because the energy of Virgo is constantly processing everything that goes on in our lives, on a daily basis. That said, if we are not taking care of our minds and bodies, our efforts do not materialize. Make sense? Astrology serves as a reminder that balance is the key to success.

Speaking of success, here's a look at your September career horoscope, according to your zodiac sign:

Aries: You're Ready To Build Something Solid

Saturn, the cosmic task master, finally goes direct on Sept. 6 after almost five months in retrograde, in your ambitious 10th house of career and professional path. This retrograde asked you to re-evaluate your goals and reputation in the world. However, with Saturn direct, now is the time to set the foundation, and continue to grow what you've already accomplished thus far. Are you ready for it?

Taurus: You're Embarking On A New Journey

Not only is electric Uranus revolutionizing your entire perspective, but Saturn is also hard at work in your expansive ninth house of personal philosophy. Speaking of, the cosmic task master finally stations direct on Sept. 6, pushing you toward a new vision and life path. Saturn retrograde helped you reflect and redefine your purpose.

Gemini: You're Ready To Stand In Your Power

Serious Saturn stations direct on Sept. 6, in your mysterious eighth house of transformation. During this retrograde cycle, the task master planet asked you to reflect on how you handle your power, and pursue your goals. With Saturn direct, now is the time to surrender to toxic emotions and power struggles, and stand firm in your soul truth.

Cancer: You're Making The Right Connections

Woohoo! Mars is finally direct in your ambitious 10th house of career and destiny in the world, pushing you closer to your goals. However, Saturn also goes direct in your seventh house of partnerships and relationships on Sept 6. During this retro cycle, the taskmaster planet asked you to re-evaluate your current connections, and their purpose. With Saturn direct, you're ready to commit and connect with people who are right for you.

Leo: You're Redefining Your Daily Routine

Party is over, it's time to grind, and the clock is ticking. For starters, Mars is finally direct in your health-conscious sixth house of work and routine, so I'm sure you're feeling that energy surge. However, Saturn also goes direct on Sept. 6, asking you to implement new practices and habits that could potentially increase your productivity in the workplace. Old habits die hard, but you also know which ones no longer serve your highest good. Get to work!

Virgo: You're Embracing Your True Colors

Your ruling planet Mercury is finally direct, and you're ready to go. However, it doesn't end there. Saturn, the cosmic taskmaster, will also turn direct on Sept. 6, in your creative fifth house of authentic expression. During this retrograde period, Saturn asked you to reflect and redefine how you express your ego. Have you been channeling your creative gifts? With Saturn direct, the cosmos are asking you to express yourself, in the most genuine way possible.

Libra: You're Really Feeling Yourself

Good news: Venus is in your sign, so I'm sure you're overflowing with charm. However, Saturn, the cosmic workaholic, stations direct on Sept. 6, in your cozy fourth house of home and soul foundation. During this retro cycle, Saturn asked you to redefine and restructure your personal obligations, and emotional needs. Have you been neglecting yourself? With Saturn direct, you are ready to set boundaries, and venture out of your comfort zone.

Scorpio: You're Being More Efficient

Guess what? Your traditional ruler Mars is finally direct, so let yourself feel the adrenaline rush. Also, taskmaster Saturn will also station direct on Sept. 6, in your third house of communication and thought process. During this retro cycle, Saturn asked you to reflect and reassess your daily thoughts, and overall efficiency. With Saturn direct, however, you're ready to take on more responsibility, and connect effectively with your peers.

Sagittarius: You're Owning Your Self-Worth

Serious Saturn goes direct on Sept. 6, in your second house of income, values, and self-worth. During this retro cycle, you were asked to reasses and redefine your morals, both material and emotional. With Saturn direct, it's time to move forward with what is genuine to your authenticity and core values.

Capricorn: You're Rebuilding Yourself From The Ground Up

Oh, Capricorn. You've been feeling this transit harder than most. However, luckily for you, your ruling planet Saturn goes direct on Sept. 6, pushing you closer to your greatness. During this retro cycle, the cosmos asked you to reflect and look inward, in terms of your surroundings and the thing's that get under your skin. With Saturn direct, however, it's time to execute and apply all that you've learned throughout this restructuring process.

Aquarius: You're Releasing What No Longer Serves You

Structured Saturn goes direct in your secretive 12th house of karma, endings, and spirituality on Sept. 6. During this retro period, the cosmos asked that you reflect on your psychological triggers and spiritual limits. With Saturn direct, on the other hand, you're ready to release old karmic patterns that no longer serve you, as it is time for you to move forward, and start again.

Pisces: You're Focusing On Yourself

Structured Saturn finally goes direct on Sept. 6, in your 11th house of teams, tribes, and extended community. During this retrograde period, Saturn asked that you reflect and redefine your goals and wishes. Have you been acting on a soul level? Or are you simply taking the superficial route? Once Saturn goes direct, you will be ready to focus solely on what's fulfilling to you and your soul truth. It's your turn, Pisces.