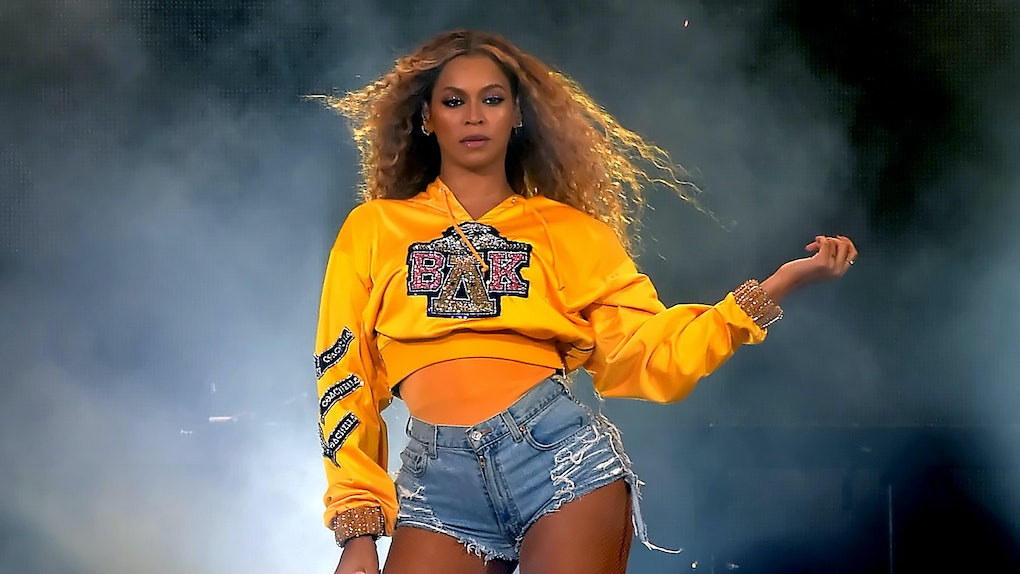 Winning Free Beyonce Tickets For Life Doesn't Require You To Go Vegan, But Here's Why It's Worth Trying

What would you do to win a free pair of Beyoncé concert tickets? What would you do to win free Beyoncé concert tickets for life? On Jan. 31, 2019, the “Top Off” singer announced via Instagram that members of the Beyhive can secure their seat at any and all of her and/or JAY-Z’s concerts for as long as they both shall sing by going vegan — only, not really. If you read the fine print, you don’t actually have to go vegan to win free Beyoncé tickets for life; you just have to pledge to somehow leave your own greenprint on this Earth, submit your name and email address to thegreenprintproject.com by April 22, 2019, and voila — your name is officially added to the pool of entries, and you didn’t even have to give up cheese in the process.

Beyoncé and JAY-Z first tried going plant-based in December of 2013, as per a blog post from JAY-Z's website Life+Times, and the two stars have since made it their mission to not only put out chart-topping albums, but to also spread awareness about the health and eco-friendly benefits of eating a vegan diet. It all started when the couple’s trainer, Marco Borges, suggested the pair dedicate 22 days to following a vegan diet. “Psychologists have learned that it takes 21 days to make or break a habit,” Borges explained in a video promoting his 22 Days Nutrition program. “So if you’ve adopted a health habit over the course of 21 days, on the 22nd day, you’d be armed with a new habit, and that is the magic to sustainability.” Then, the day before the “Holy Grail” rapper turned 44, he wrote in his 2013 blog post that he and Beyoncé would "embark on a 22 Days challenge to go completely vegan."

“They walked away with a greater understanding of the powerful benefits of plant-based nutrition,” Borges told PEOPLE of Bey and JAY's transition. “They were getting people saying, ‘Your skin has this glow.’ And who doesn’t like being told they look awesome?”

So, back to the whole "greenprint" and "free Beyoncé tickets for life" thing: Borges recently published a new book called The Greenprint: Plant-Based Diet, Best Body, Better World, which is basically an all-encompassing guide to veganism, and Bey and JAY penned the introduction. To capture the reader’s attention, the couple's excerpt briefly explained how their own vegan journey began, and why they continue to stay on this path. “We realize now, more than ever, that most of the things we want for ourselves we also want for the world—peace, happiness, love, prosperity, and, above all, health,” they wrote, adding that it’s up to you and me to do our part, in any way we can. They continued,

A single decision by one person can affect change not only within themselves but also within their family, their community, and the planet.

We all have a responsibility to stand up for our health and the health of the planet. Let’s take this stand together. Let’s spread the truth. Let’s make this mission a movement. Let’s become "the Greenprint."

Of course, Beyoncé and JAY-Z are a lot of things — performers, actors, producers, influencers, parents — but they aren’t doctors. Following a 100 percent plant-based diet sounds wonderful in theory, but not all bodies thrive on a vegan diet. That being said, however, there are a slew of benefits that come along with eating an abundance of fruits and vegetables, such as gaining more energy, potentially lowering your risk for disease, healthier bowel movements as a result of all that extra fiber, better sleep quality, and to top it all off, going plant-based is super eco-friendly.

So what will your greenprint be? Again, keep in mind that you don’t actually have to go vegan to win free Bey and JAY tickets for life, especially if this way of eating isn’t right for your body, budget, lifestyle, or if it's just something you’re not super interested in in general (no judgments here). Before making any significant changes to your diet, I highly recommend you do your own research, as well as sit down with either your doctor or a nutritionist to weigh the pros and cons. That way, with all the information laid out in front of you, you can make an informed decision about whether veganism is right for you, or, if it’s not, how you can incorporate more plant-based foods into your overall diet.

It’s also worth noting that, even though the Greenprint Project Sweepstakes guidelines don’t technically require you to go 100 percent vegan, the website itself does offer a few suggestions for how you can leave your own greenprint on the world (so you can still eat your cheese, and do your part to help the planet, as well as reap some pretty amazing health benefits in the process). Once you click through The Greenprint Project’s homepage, and read up on different stats about plant-based living and how it affects the environment, as well as your health, you’ll come to a drop-down menu entitled “What’s Your Greenprint?” that lists a few strategies, like eating plant-based for breakfast, eating plant-based meals during the work day, on Mondays, or for the entire work week — all of which are completely doable, wouldn't you say?

So the moral of the story here is this: If you’re down to transition to veganism cold-turkey for the sake of scoring free Beyoncé tickets for life, more power to you, but if you’re not, there are ways to incorporate more plant-based goodies in your overall lifestyle. For example, you could try swapping whey protein powders for plant-based alternatives, like Nutiva’s Plant Protein Superfood Smoothie, or if you’re in the mood for pasta, give Cece’s Veggie Co. noodles a taste (the beet spirals are my personal fave). For breakfast, maybe opt for avocado toast, or spread Miyoko's vegan cream cheese over a bagel, and load up on colorful salads for lunch, or soups with vegetable broth as a base.

Trust me, Bey and JAY don't seem to be saying the entire world has to be 100 percent vegan; they just want to inspire you to give this way of eating a try for both yourself, and for the planet. Offering up free tickets to see both of them in concert for life is definitely a solid way to do it, though.

More like this
TikTok's "Nature's Cereal" Ice Cream Is A Bussin' Dessert Version Of The Viral Trend
By Rachel Chapman
I Tried Singing While Running Like Miley Cyrus & OMG, My Lungs
By Rachel Varina
TikTok’s Taylor Swift Era Trend Documents Your Throwback Swiftie Evolution
By Rachel Chapman
Stay up to date