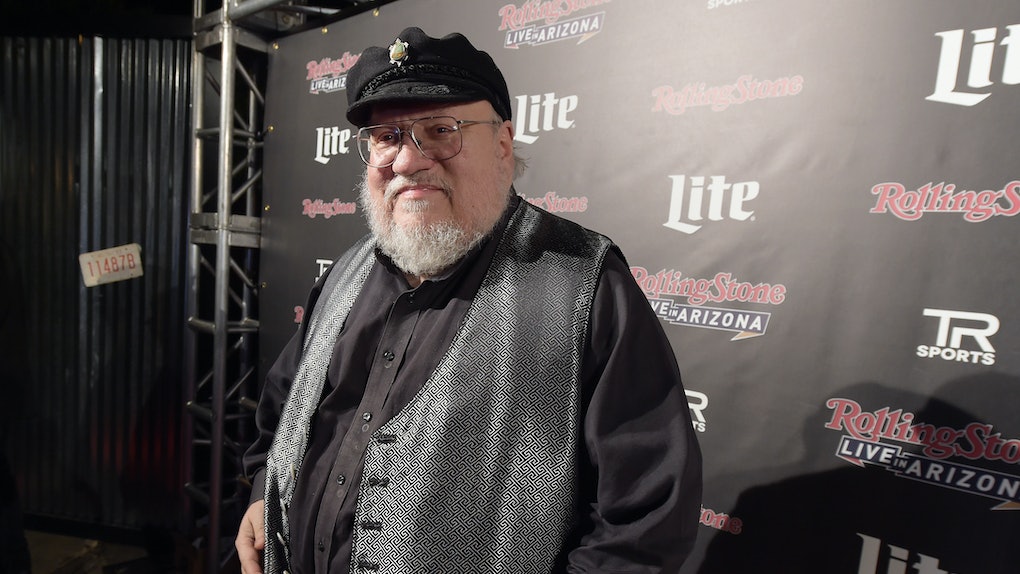 Will 'Winds Of Winter' Be Two Books? George R.R. Martin Has A Message For 'GOT' Fans

Towards the beginning of 2018, George R.R. Martin took a break from the internet, stating that he had a lot going on, and his blog would be kept up by others. This past week, that ended, as Martin's newest book, Fire & Blood, got a release date, and he joyfully took to his new NotABlog to tell the world. Since then it's like a dam of information burst including new details on the A Song of Ice and Fire series, and the possibility of the next book being split in two. Will Winds Of Winter be two books? Turns out the answer is not if Martin has anything to say about it.

The original post for Fire & Blood's cover reveal and release date announcement derailed before Martin could get into it. A grand announcement turned into millions of headlines that Winds of Winter was not coming this year, again. All because Martin thought it best to get this news out of the way.

Unlike most new blogs, which eschew comments, Martin rolled over the tradition from his LiveJournal to his new blog. Though some hardcore fans cheered over the Fire & Blood news, others spent their time demanding to know more about Winds. Martin, who has always participated in the comment section, obliged. He told one fan:

Some of my publishers have suggested breaking up WINDS as we did with FEAST and DANCE. I am resisting that notion.

Martin's slowness in writing novels is legendary at this point. His ability to knock out the first three A Song of Ice and Fire novels every two years (A Game of Thrones in 1996, A Crown of Kings in 1998 and A Storm of Swords in 2000) was partly due to him having most of the second two written before the first one was released.

The split he is referencing above happened in 2004, when his editors, desperate to publish something to follow up Storm, convinced Martin to split A Dance of Dragons in two, creating A Feast For Crows and A Dance With Dragons. The thought was this would make things go faster. Feast would publish in 2005 and Dance in 2006 or 2007, since he was almost done.

Readers know how that went. It took Martin until 2011 to finish Dance, and only because the HBO production lit a fire under him.

Since then he's spent seven years and counting working on Winds. Splitting it in half might gain a half a novel next year, but the end result will put him even further behind in working on the follow-up book A Dream of Spring. Martin's been down this road before, he knows better.

Then there were those commenters who were Mad on the Internet that Martin was releasing a new book when the core story was still incomplete. Fire & Blood is ostensibly a "fantasy history of Westeros" book not unlike J.R.R. Tolkien's The Silmarillion. The point was made that Tolkien finished Lord of the Rings first. Martin had a sharp word for them.

You call LOTR 'the main story,' but if you had asked Tolkien, he would have said the SILMARILLION was his main story, his life’s work. Yet he was never able to complete it during his lifetime. Not because he did not care, however…

Martin then gave a little tutorial how some of the most revered authors of our time never finished their work themselves.

…Just for the sake of argument, let me point out that many many people invest their time into works without endings. F. Scott Fitzgerald never finished THE LAST TYCOON, Charles Dickens never finished EDWIN DROOD, Mervyn Peake never finished TITUS ALONE, yet those works are still read. I do intend to finish A SONG OF ICE AND FIRE, of course… but doubtless Peake, Dickens, Fitzgerald, and Tolkien would have said the same.

This is the first time Martin has admitted that perhaps the written novel version of A Song of Ice and Fire will not be completed before he passes. But he is completing other works of Westerosi history. Perhaps readers should enjoy what is to be had in the time that is given.

More like this
This 2021 'Game Of Thrones' Season 8 Trailer Is So Confusing... & So Good
By Ani Bundel
These Tweets About Regé-Jean Page Leaving 'Bridgerton' Are Royal Bummers
By Cianna Garrison
Britney Spears' Instagram Message To Fans "Concerned With Her Life" Is So Positive
By Brandy Robidoux
Stay up to date