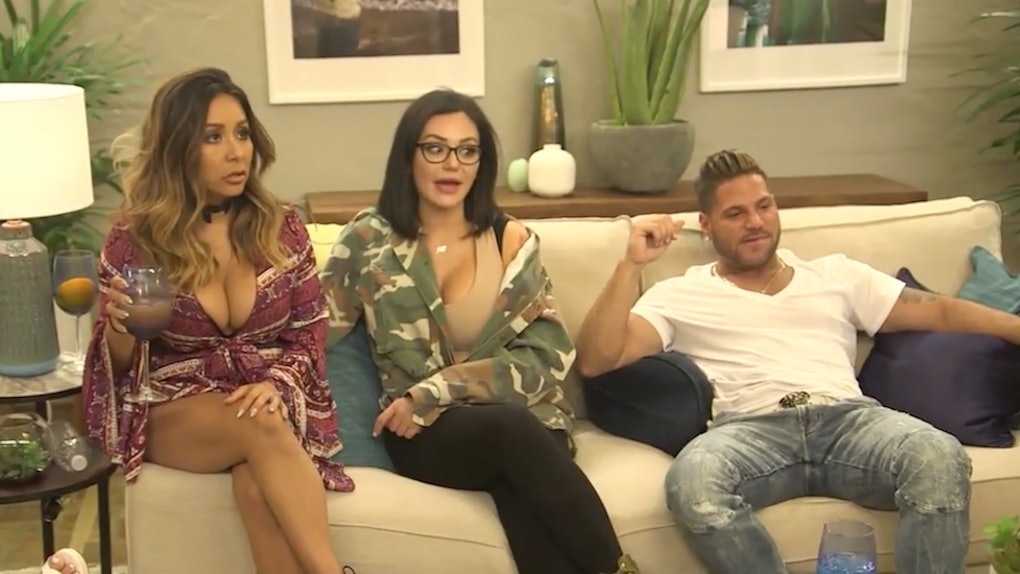 Will Snooki Leave 'Jersey Shore Family Vacation'? The Premiere Ends On A Cliffhanger

Thursday night's Jersey Shore Family Vacation premiere kicked things off with a bang, as the original Jersey Shore castmates (minus Sammi Sweetheart) returned to reality television together for the first time since their show ended in 2012. The two-hour premiere was a bit of a strange mix of the old (alcohol and screaming matches abound) and the new (everyone's in a committed relationship now), but thankfully, Snooki is still fully Snooki. The premiere did end on a downer though, and now fans are wondering will Snooki leave Jersey Shore Family Vacation? Let's talk about that dramatic cliffhanger ending.

I'll admit than when I first heard about MTV's plan to bring the Jersey Shore cast back together for a reunion series, I feared that it would be kind of lame since most of the cast is married or in a committed relationship now, and a good amount have children. Could they all still party as ridiculously hard as they did in their early 20s now that they have significant others and children waiting for them at home?

I should have known never to doubt Snooki — the meatball brought it just as hard as ever when the Family Vacation crew went out to the nightclub, getting so plastered that she fell on the street on the way home. And in her hungover daze the next morning, she also gave us the #relatablecontent of the series when she found a pizza in the back yard and brought it to bed with her to snuggle before devouring.

But unfortunately, Snooki did have to learn the hard way that she might not be able to go as wild as she did on her first Jersey Shore go-round. At the end of the episode, Snooki and Deena decide to get drunk on wine (because they've graduated from getting drunk on vodka, they point out), and come up with a plan to get rid of the creepy, life-sized Sammi Sweetheart doll/mannequin that Pauly D brought into the house to fill the Sammi void.

As you might expect, Snooki and Deena's plan isn't exactly... the best way to go about things. They decide to hurl the doll into the pool in the back yard, as some sort of ceremonial drowning. Honestly, that Sammi doll went through some rough stuff in that house — it was constantly thrown around and trampled by the whole cast — so putting it out of its misery might have actually been the best call. But Snooki and Deena quickly see the error in their plan, as the Sammi doll floats face-down around the pool, looking like an actual dead body that the cast has stashed in their back yard.

The doll drowning causes more laughs among the cast than legitimate worry, but the good time suddenly disappears when Snooki realized that she lost her wedding ring at some point in the transportation of the Sammi doll from the living room to the pool. Thus begins an extensive search, which Vinny says is taking about two hours, while Snooki has a total breakdown. Finally, with her face stained with tears, it appears that Snooki is giving up, and she calls her father and tells him "Jionni is going to kill me" between sobs.

While all of this was happening, Snooki was also cry-screaming that she wanted to go home, and the episode ends with Snooki heading for the front door as she declares her intention to return home once again. It certainly looks like Snooki could be leaving the show right after the premiere episode, but then the previews for next week show that Snooki is sticking around... although a fight with JWoww has her again questioning whether the return to reality TV is hurting her marriage. We'll just have to keep hoping that Snooki sticks it out all season — what would Jersey Shore be without Snooki!?

More like this
'Ted Lasso' Season 2: Apple TV+ Release Date, Trailer, Cast, & More
By Ani Bundel
8 Facts About Lisa Delcampo On 'The Circle,' AKA Lance Bass' Assistant
By Rachel Varina
Is Commander Joseph Lawrence Good Or Evil? 'The Handmaid's Tale' Fans Have Questions
By Ani Bundel
Stay up to date