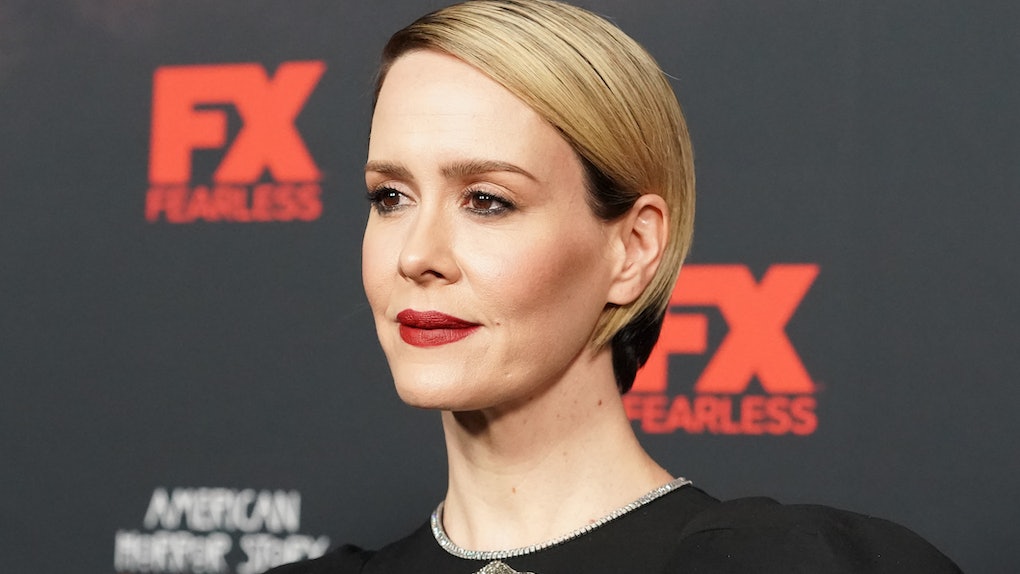 Will Sarah Paulson Be In 'AHS' Season 10? She Said She Wants To Return

It is very clear why the ninth season of American Horror Story feels so different from the past eight: For the first time ever, AHS is not featuring stars Sarah Paulson or Evan Peters at all. While the anthology horror series is known for shuffling around cast members for every new season, Paulson and Peters have stood out as the only two perfect-attendance performers on the show... up until AHS: 1984, that is. With the two stars sitting out, fans have wondered: Will Sarah Paulson be in AHS Season 10, or is she done with the show for good? Thankfully, Paulson recently spoke to TV Guide about her thoughts on her future involvement with the franchise.

While at the American Horror Story 100th episode celebration over the weekend, Paulson confirmed that her skipping out on AHS: 1984 does not mean that she wants to be done with AHS as a whole. "I would love to [return for Season 10]," Paulson said to TV Guide. "I need to be a part of it again."

Well, that should certainly make AHS fans hopeful for a return next season! Up until recently, many fans were still holding out hope that Paulson would have at least a tiny part in the last few episodes of AHS: 1984. Back in July, news broke that Paulson would not have a lead role in the '80s slasher-themed season, since she is hard at work on her upcoming Netflix series Ratched. The wording of that report led fans to believe she could still have a cameo appearance to maintain her perfect-attendance record, but those hopes were dashed a couple of weeks ago when Paulson confirmed she is not in AHS: 1984 at all.

It is still way too early to know anything about Season 10, but it definitely sounds like Paulson is already aiming to return in whatever new horror story Ryan Murphy has cooking up. She also revealed which of her numerous iconic characters she would love to play again, should AHS Season 10 bring back a past favorite: Paulson said she would love to play Cordelia Goode any time she can.

Paulson first played Cordelia in AHS: Coven, when she was a witch with visual impairments who was helping her mother Fiona select the coven's next Supreme. At the end of that season, Cordelia was revealed to be the Supreme, and when she returned in last year's AHS: Apocalypse, she showed off the full extent of her magical powers to prevent the end of the world.

The possibility of Cordelia coming back for Season 10 is major for fans, but Paulson was not done with her wish list for next season. She also stated that she really wants to do something with Peters next season, which is definitely something the AHS fandom is hoping for as well. "I miss Evan and I miss acting with Evan," Paulson said. "If he'll come back, I'm back."

Peters confirmed he would not be in AHS: 1984 way back in April. And in the following months, he sounded a bit iffy about returning to AHS after Season 9, so his return definitely still has a big question mark on it. But at least now fans know that Paulson wants to come back next season, and that she is pulling for Peters to return with her.