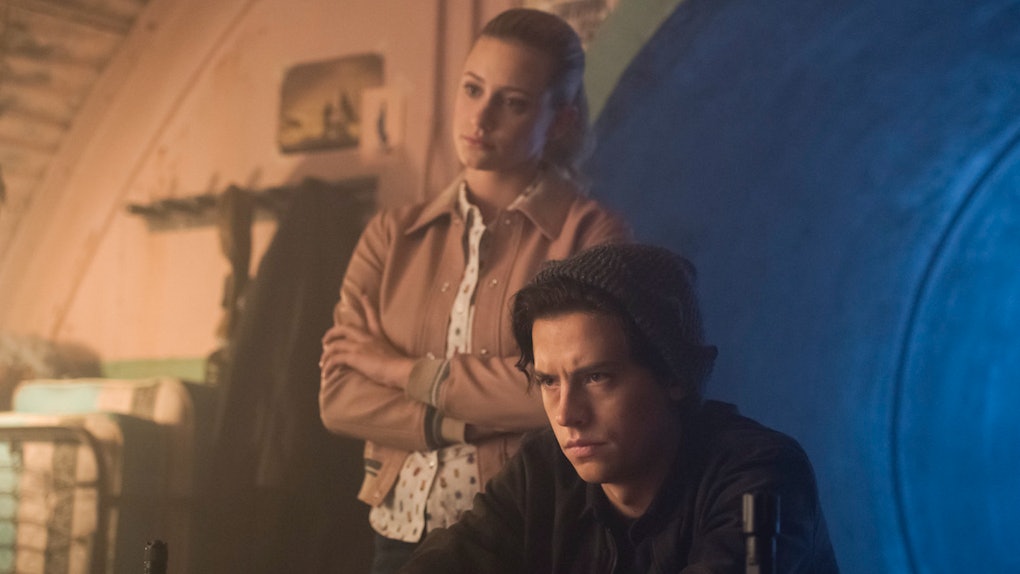 Will Penelope Blossom Be In 'Riverdale' Season 4? She's Officially The Show's Main Villain

Riverdale fans finally know who the Gargoyle King is after that climactic Season 3 finale, but the truth of the twisted mystery went so much deeper than just who was the person wearing the mask. In fact, the big reveal helped to explain key moments from past seasons, and seems to be setting up a big plot point for the upcoming Season 4 as well. Spoiler alert: This post contains spoilers from the Riverdale Season 3 finale, "Survive the Night." After that season finale, every fan is probably wondering will Penelope Blossom be in Riverdale Season 4. Now that she has been revealed to be the villainous mastermind behind everything, it is only a matter of time before Penelope comes back with another murderous revenge plan.

Surprisingly, the Riverdale Season 3 finale wasted no time in unpacking the season's biggest mystery. At the beginning of the episode, Penelope Blossom summoned Archie, Betty, Veronica, and Jughead to her home for an ominous dinner alongside the Black Hood and the Gargoyle King. When Penelope instructed the two killers to take off their masks, it was no surprise that Hal Cooper was the Black Hood, but at long last fans finally found out that the Gargoyle King has actually been Chic this entire time. Ethel Muggs had only told Jughead that the Gargoyle King was Jason Blossom because Chic had dyed his hair red and began going by Jason at Penelope's insistence.

Although Hal and Chic were the ones doing all the killing as Riverdale's two most prominent masked murderers, Penelope revealed that she was actually the person pulling all of the strings behind the scenes. She admitted to encouraging Hal's murderous impulses during their affair together in Season 2, and then when Hal was being sent to jail, she began grooming his protégé Chic to continue to killing spree under the guise of the Gargoyle King. Once again, it seems all the evil in Riverdale stems from the Cooper/Blossom family.

So, why did Penelope Blossom do all of this? Simply because she hates Riverdale. Penelope said that she has never forgiven the town after the Blossoms adopted her as a child bride for Clifford, and her anger only grew when nobody reached out to comfort her after Jason's death.

This all leads to Penelope Blossoms big murder scheme, forcing Archie, Betty, Veronica, and Jughead — the new generation of the Midnight Club — to face one lethal obstacle each in the woods. Thankfully, the gang is able to make it through the challenges: Archie defeats a giant, bear-like man, Veronica passes a poison-based loyalty test, Jughead beats Chic in a fight, and Betty shoots her father in the hand.

In the end, the gang manages to take down both the Black Hood and the Gargoyle King after Penelope shoots Hal in the head and Chic is thrown in prison after his fight with Jughead, but the true mastermind behind both killers manages to escape into the night. That means Penelope Blossom is still out there somewhere, and you can bet that she is coming up with another devious scheme to try to kill Archie, Betty, Veronica, Jughead, and everyone else in town. We will find out what that new plan might be when Season 4 premieres, which will likely be sometime this October.

More like this
When Will 'Riverdale' Season 5 Return In 2021? Its Mid-Season Break Is Long AF
By Rachel Varina
In 'Riverdale' Season 5, Toni Topaz Is The Black Superwoman Without A Cape
By Erika Hardison
How Many Episodes Will 'This Is Us' Season 5 Have? Only A Few Are Left
By Ani Bundel
Stay up to date