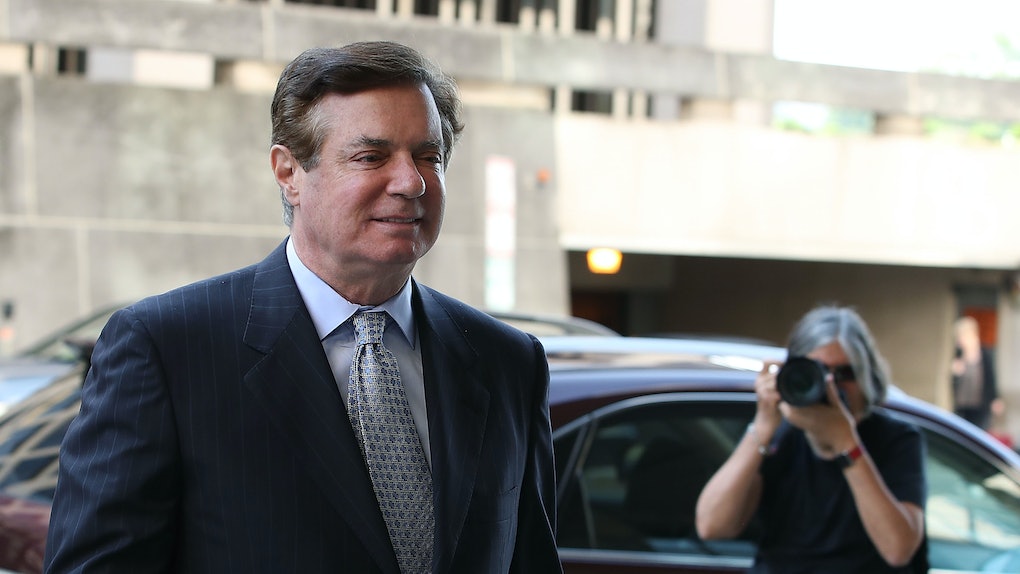 Will Paul Manafort Take A Plea Deal? Start The Countdown

President Donald Trump's White House has found itself in legal quicksand as Special Counsel Robert Mueller continues his investigation into possible collusion with Russia during the 2016 election. Now, the saga continues with news that Trump's former campaign chairman Paul Manafort, who has already been convicted of felony financial fraud, is reportedly in talks with Mueller's investigation about some kind of plea deal. Elite Daily reached out to Manafort's attorney, Kevin Downing, for comment on the reports of a plea deal discussion but did not immediately hear back. So will Paul Manafort take a plea deal? Start the countdown.

Near the end of August, Manafort was convicted on eight felony fraud counts by a Virginia court, including two counts of bank fraud, five of tax fraud and one count of hiding foreign bank accounts. It could have been worse — Manafort was charged with 18 counts of financial fraud, of which 10 were declared a mistrial. And it could still get worse, as Manafort is scheduled to go to court on charges of money laundering, tampering with witnesses, and failure to disclose foreign lobbying in a separate trial starting Sept. 17 in Washington, D.C. While he didn't take any sort of deal before the first trial and let it play out in court, according to The Washington Post, Manafort is reportedly considering a plea deal ahead of his second trial having to do with charges of alleged money laundering and lobbying violations.

Manafort is already facing up to 10 years in prison following his first trial, but if he makes a deal with Mueller instead of having to face another trial, he might lessen his time in prison for the first trial as well, according to Bloomberg. Special Counsel Mueller's investigation declined to comment to Elite Daily on the reports.

As a prominent figure in the Trump 2016 campaign, Manafort is seen as a key figure into any possible collusion between the campaign and Russia. In 2016, he was one of the people present at a Trump Tower meeting between Donald Trump Jr. and Kremlin-connected Russian Lawyer Natalia Veselnitskaya, and the charges against him are reportedly based on information found by the Mueller investigation into possible collusion.

While there are no details about the contents of the reported talks or what any plea deal would entail, the idea that Manafort might be cooperating with Mueller at all is kind of surprising. Before his first trial, Manafort slammed his former business partner, Rick Gates, for taking a plea deal, according to The Washington Post. Gates later testified against Manafort in his Virginia trial. In February, Manafort said in a statement that he expected Gates to have "the strength to continue to battle," and added that he was committed to defending himself against "the untrue piled-up charges." Manafort said,

Notwithstanding that Rick Gates pleaded today, I continue to maintain my innocence. I had hoped and expected my business colleague would have had the strength to continue the battle to prove our innocence. For reasons yet to surface he chose to do otherwise. This does not alter my commitment to defend myself against the untrue piled-up charges contained in the indictments against me.

Manafort was even praised by the president for refusing to "break" after the first jury found him guilty. Trump wrote in an Aug. 22 tweet,

I feel very badly for Paul Manafort and his wonderful family. 'Justice' took a 12 year old tax case, among other things, applied tremendous pressure on him and, unlike Michael Cohen, he refused to 'break' - make up stories in order to get a 'deal.' Such respect for a brave man!

Whether or not Manafort ends up pleading guilty and taking a plea deal for his second set of charges, a possible pardon might still be on the table. As president, under the constitution Trump has the power to pardon people convicted of federal crimes. While Trump hasn't made an explicit comment in regards to a possible pardon for Manafort, it's clear by his August tweet that the president still respects his former campaign chairman, so that outcome shouldn't be ruled out.

Honestly, at this point, nothing should be ruled out. Manafort's fate might still be unknown, but at least there are a few possible outcomes on the table for us to keep and eye on in the coming weeks.