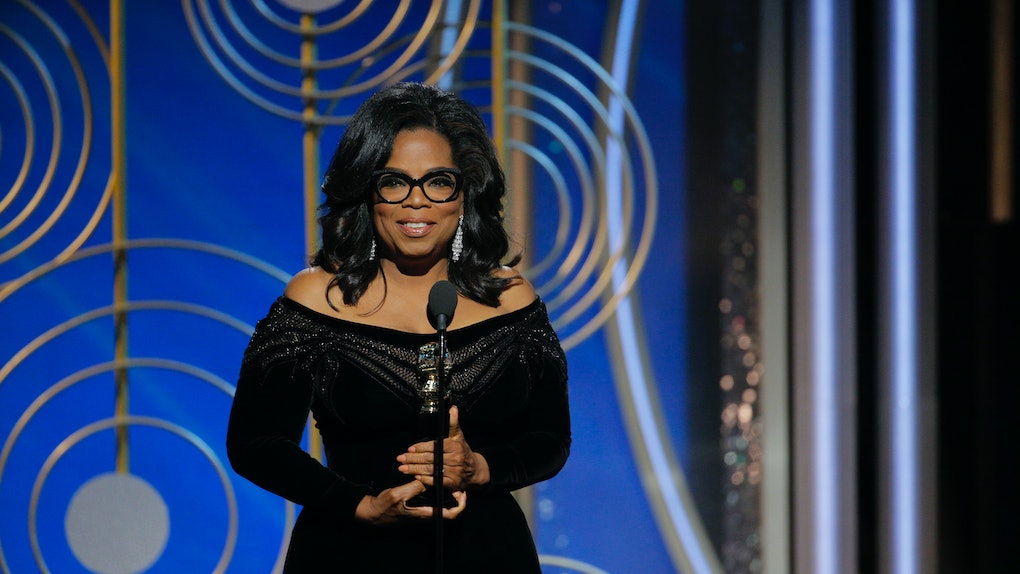 Will Oprah Winfrey Run For President? Stedman Graham Said She "Absolutely" Would

If you still haven't come down from the euphoria brought on by listening to Oprah Winfrey's speech after she accepted the Cecil B. DeMille award at the 75th Annual Golden Globes on Sunday, Jan. 7, I get it. I also get it if you've been rewatching it all day. It's no surprise that the seasoned former talk show host has a way with words, but the way that she addressed the current reality of creating necessary change while painting a hopeful picture for the future was masterful, and it left some people wondering if Oprah Winfrey will run for president.

The answer to that question depends mostly on the American people. Given that Oprah has created her own empire from the ground up and is one of the first people who comes to mind when you think about strong women, it's not all that surprising that some would see her as fit for the position of the president of the United States. Granted, prior to a world where the former host of The Apprentice won the presidency, these talks of "President Oprah Winfrey" seemed a bit more far-fetched.

But now, people want a real answer to whether or not she would run. Thankfully, Stedman Graham, her partner, was willing to give an answer on Sunday, Jan. 7 when he told The Los Angeles Times writer Amy Kaufman, "It's up to the people. She would absolutely do it."

Hold the damn phone. You're telling me that Oprah's long-time partner believes that if the American people wanted to make her goddess, er, commander-in-chief, she would be game? According to Kaufman's tweet on Sunday night, that seems to be the case.

OK, let me pause here for a second. Now, I love Oprah as much as anyone (like, I really want to make that clear), but I am a bit wary of a lasting trend of electing individuals with no political experience to the highest office in the land. With that said, though, there is no doubt that Oprah is extremely intelligent, caring, and philanthropic (just check out her Golden Globes speech), and those are all qualities that a president should possess.

In a perfect world — and let's face it, this world is far from perfect these days — the president would have all of those aforementioned qualities along with political experience and know-how. If the 2016 U.S. presidential election wasn't enough to illustrate that none of those qualities are must-haves for too many Americans, then maybe the first year of this current presidency has proven it with one questionable decision (see: "violence on many sides") after another. One of the main reasons Donald Trump won over voters was his message to "drain the swamp" and rid Washington D.C. of political life-timers, according to the Claremont Institute. His supporters liked Trump's political disruption, and his lack of political experience was a plus for them.

Since America is living through a time where lengthy political resumes are essentially viewed as campaign poison, the prospect of Oprah running for president isn't too far out there. As a bonus, she appears to be one of the most-qualified individuals — if the country is only choosing from a pool of the politically inexperienced.

During the 25-year-run of The Oprah Winfrey Show, she had over 28,000 guests on her show, according to Oprah.com. Of course, she had some high-powered celebrities in the chair across from her, but Oprah also tackled current events. For example, Oprah addressed the public AIDS scare in 1987 by having an HIV-positive man, Mike Sisco, on her show to dispel myths about how AIDS is spread (it is only contracted through blood-to-blood contact, sex, and from mother-to-child in utero and through breastfeeding) after he was hammered for swimming in a public pool, according to The New York Post.

Beyond consequential interviews, though, Oprah shared in her Golden Globes speech that she's grateful for and fiercely protects a free press, and expressed her hope that movements like Time's Up and #MeToo will change society in a way that will prevent anyone else from having to say "me too" in the future.

Again, I prefer a president who will be familiar with the process of swearing in on Inauguration Day, but if career politicians are off the table, then Oprah is definitely a strong contender — and, according to Graham, a willing one at that.

More like this
What Is Boo Bash At Disney World? The Halloween Event Has Rides, Music, & Themed Treats
By Cianna Garrison
Here's How To Go Live On TikTok To Switch Up Your Videos
By Daffany Chan
What Does Pepsi Blue Taste Like? It Has Familiar Fruity Flavors
By Cianna Garrison
Stay up to date