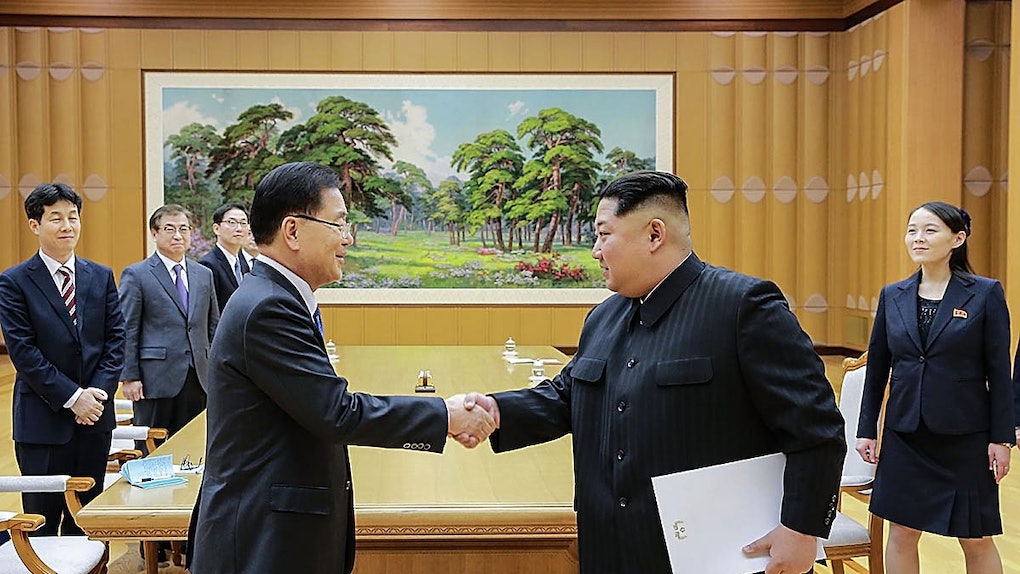 Will North Korea Give Up Its Nuclear Weapons? Chances Are Looking Better

Monumental progress was made in international diplomacy on Tuesday, March 6 as North and South Korea came together for a groundbreaking discussion of nuclear programs. The idea that North Korea will give up its nuclear weapons became, for the first time, not such a far-fetched one. The meeting was a turning point not in the conversations just for the two Koreas, but for the United States as well.

The talks took place in Pyongyang, North Korea's capital, over two days. During the meetings between North Korean Supreme Leader Kim Jong-un and a group of South Korean envoys, Kim reportedly said he was willing to discuss the possibility of denuclearization with the U.S., according to The New York Times, in the first time he's signaled a willingness to do so. The talks ended with an agreement to set up a meeting between Kim and President Moon Jae-in in April on the area bordering the two countries.

According to The New York Times, a statement from the South Korean president said that the North felt there was no need for its weapons program so long as its security could be assured and its threats eliminated. It added, "The North expressed its willingness to hold a heartfelt dialogue with the United States on the issues of denuclearization and normalizing relations with the United States."

Per the South Korean statement, the North will also avoid stirring up tensions in the meantime. "It made it clear that while dialogue is continuing, it will not attempt any strategic provocations, such as nuclear and ballistic missile tests," read the statement.

North Korea's stances, which the South stresses include a willingness to denuclearize, haven't yet been confirmed in a statement of its own, the Times points out. But if so, Kim's openness to such a shift would be a historic change in an ongoing standoff reminiscent of the Cold War.

That the North is open to denuclearization talks is a big deal.

The tension over the last year has been palpable as the North ratcheted up its missile tests, prompting concern from the South and the larger international community, as well as President Donald Trump's ire. Between February and December 2017, North Korea continuously upped the ante with each of its 16 missile tests. As the nuclear show of force unfolded, the two leaders exchanged fiery words, including reciprocal threats to "totally destroy" each other with "fire and fury like the world has never seen" (per Trump), boasts about the strength of their nuclear programs (and the buttons on their desks), and even name-calling. The U.S. military also began prepping for a possible war, per The Times.

Trump appeared to take the news cautiously in his initial response on social media. "We'll see what happens!" he tweeted on Tuesday, sharing the news. An hour later, he followed up, saying, "Possible progress being made in talks with North Korea. For the first time in many years, a serious effort is being made by all parties concerned. The World is watching and waiting! May be false hope, but the U.S. is ready to go hard in either direction!"

Others appeared cautiously optimistic of the news as well.

"History has taught us that we should be cautious and skeptical of North Korea. But this is a positive development, because as Winston Churchill put it, to jaw-jaw is always better than to war-war."

MSNBC's Morning Joe co-host Willie Geist questioned how the administration would handle such a delicate situation given recent developments. On Tuesday, Feb. 27, the U.S. State Department's top North Korea policy representative announced he was retiring that week after Trump refused to engage in nuclear talks except under certain conditions.

"Given their track record, we need to approach talks with eyes wide open, but even the possibility is a positive step forward," tweeted Representative Adam Schiff (D-CA) on Tuesday.

Even at a more festive venue, relations between the U.S. and the two Koreas didn't appear overly friendly at the 2018 PyeongChang Winter Olympics in South Korea last month. Though it was a big deal that the North showed up at all — not to mention that the two Koreas marched under the same flag in a symbolic show of unity — U.S. Vice President Mike Pence didn't exactly roll out the welcome mat. After declining the South's invitation to dinner, avoiding the North's delegation, he refused to stand for Korean athletes during the opening ceremony, a tension only worsened by the fact that Kim's sister showed up and they failed to interact even while sitting just a few feet apart.

It's unclear what, if anything, will transpire diplomatically between the three countries prior to the meeting between Kim and Moon. But the Trump administration's response — including the president's tweets — is arguably more crucial than ever.