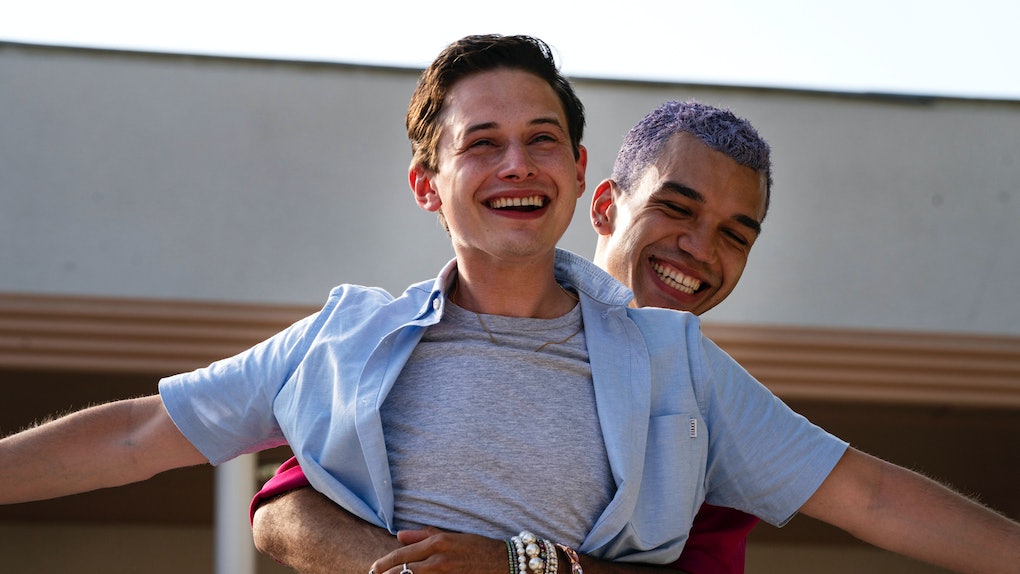 Will Nathan & Chester Get Together On 'Generation'? That Voicemail Was A Lot

Like any good teen show, Generation is heavy on relationship drama. The show follows several Gen Z teens as they explore their identities and experience the highs and lows of first love. And it seems like a new romance could be on the horizon. After the mid-season finale, you may be wondering: Will Nathan and Chester get together on Generation? It could go either way, TBH.

So far, Nathan has spent most of Season 1 coming to terms with his bisexuality. Although he briefly hooked up with his sister Naomi's boyfriend and dated family friend Arianna, Nathan was particularly interested in popular water polo star Chester, who was secretly harboring feelings for his adult guidance counselor Sam.

Nathan and Chester definitely have chemistry, and everything changed when Riley dared them and Arianna to "three-way kiss" during the Gay-Straight Alliance Club's class field trip in Episode 7. That same episode, Nathan and Arianna broke up after she became convinced he was more interested in Chester, and Sam rejected Chester's advances once and for all. It seems like everything is coming together for Nathan and Chester to finally give things a shot, but the mid-season finale made everything way more complicated.

In Episode 8, fans learned that in his heartbreak over Sam, Chester pulled a fire alarm and was suspended for four days. Upon his return to school he wasn't his usual outgoing self, but Nathan was determined to let Chester know his true feelings for him. Ignoring Riley's protests, he called Chester and left a rambling voicemail that quickly spiraled out of control. Referencing a previous conversation the teens had about whether they would have sex with their clones, Nathan said, "Who wouldn't want to f*ck their clone if their clone was you?" LOL, but also... cringe.

He continued the voicemail by telling Chester he would've given anything to make him feel better during his suspension. "Sometimes I wanna ... make you feel how I feel about you. Because I don't wanna use the word love," Nathan admitted, before his voicemail was automatically cut off and he was left mortified. Later, when everyone helped Delilah drop her unexpected baby off at a fire station, Chester told Nathan he'd listen to the voicemail later. When Nathan urged him to just delete it, Chester responded, "Oh honey, now I am definitely listening to it." (Nooooooo!)

Even if Chester is able to look past his lingering feelings for Sam and the awkwardness of Nathan's message, there are some other obstacles in the potential couple's way. First of all, Chester may be developing a new crush on his shy classmate Bo. The two bonded after Chester returned to school, and Chester later DMed him asking to hang out. It's possible a love triangle could be heading fans' way later in Season 1.

There's also the issue of Nathan's conservative mom Megan, who was livid after Naomi accidentally uploaded the video of Nathan, Chester, and Arianna kissing to the family iCloud. It's clear Megan is still grappling with her son's bisexual identity, so that tension could throw a wrench into any potential romance with Chester. Still, Nathan and Chester have an undeniable connection, and if they can help each other work through their coming-of-age problems, Generation could introduce a major new power couple. Fans will have to stay tuned once Generation returns with the rest of Season 1.

More like this
'Generation' Star Haley Sanchez Hopes Greta & Riley Are Endgame — EXCLUSIVE
By Abby Monteil
These 'The Nevers' Theories About That Flying Ship Are Absolutely Bonkers
By Ani Bundel
Who Are The Touched In 'The Nevers'? Their Abilities Are Completely Wild
By Ani Bundel
Stay up to date