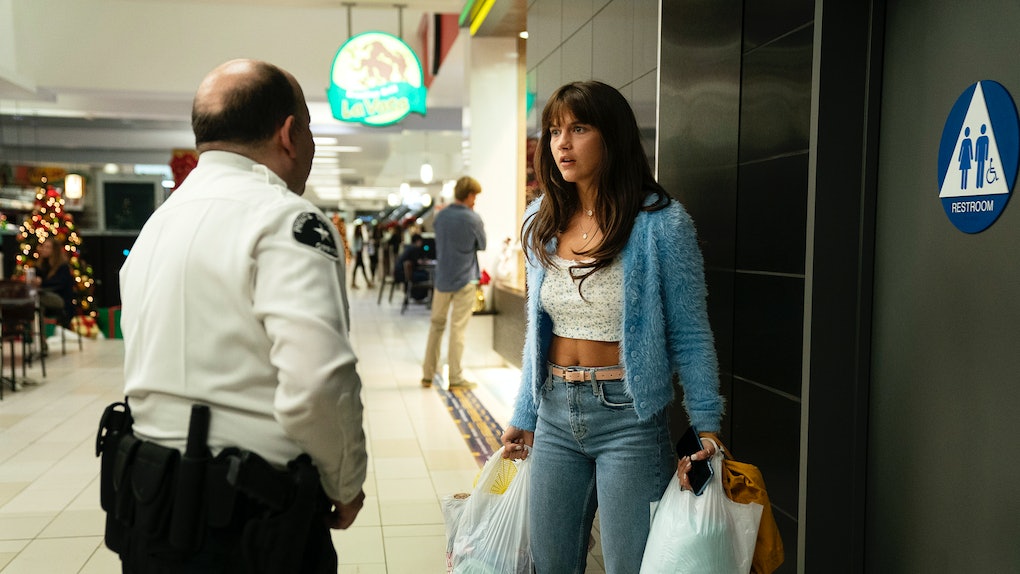 What's Going On In The Mall Bathroom On 'Generation'? This Storyline Is Wild

HBO Max's new show Generation just premiered On March 11, and things are already getting intense. It follows a group of Gen Z teenagers dealing with issues like first hookups and figuring out their identities, but one storyline doesn't fit into your typical high school experience. There's a good chance that if you've watched the first three episodes, you're wondering what's actually going on in the mall bathroom on Generation. It's truly wild, so let's break down everything we know so far:

Warning: Spoilers for the first three episodes of Generation follow. The series opened on main character Naomi (Chloe East), as she waited for an unnamed friend to finish using the bathroom at their local mall. Although she initially thought her friend was moaning in pain because of period cramps, the girl proclaimed that she was actually giving birth. From then on, the show was set in two different time periods: The mall storyline and the main events of the show, which began three months earlier.

The next two episodes opened with more flash-forwards to the chaotic day, as Naomi frantically gathered baby supplies and called her other friend, Ariana (Nathanya Alexander), for backup. By Episode 3, it was revealed their friend Delilah was the one supposedly giving birth.

The girls attempting to unexpectedly deliver a baby during a detour from a Sephora sales event is hands-down one of the funniest and most bizarre parts of Generation so far, but is Delilah *actually* giving birth, or is something else happening? Apart from her calling out a teacher for misogyny and ranting about problematic Disney movies, viewers haven't seen a ton of Delilah so far. She hasn't even had a love interest yet, and Naomi and Ariana were both confused about who could be her baby's father.

Since Delilah seemed just as shocked about what was going on, it doesn't appear she was aware of her potential pregnancy up until this point. It's possible she got pregnant only a few months ago (perhaps when the bulk of the season takes place) and is now having a miscarriage, which often cause severe cramps like the ones Delilah could be experiencing. Or maybe Delilah is dealing with some other medical emergency entirely. Fans will just have to keep watching to figure out what exactly is going on, but it's clear Generation is telling a story of a teen mall excursion like no other.

New episodes of Generation on air Fridays on HBO Max.

More like this
'Generation' Star Haley Sanchez Hopes Greta & Riley Are Endgame — EXCLUSIVE
By Abby Monteil
Will Nathan & Chester Get Together On 'Generation'? That Voicemail Was A Lot
By Abby Monteil
This 2021 'Game Of Thrones' Season 8 Trailer Is So Confusing... & So Good
By Ani Bundel
Stay up to date