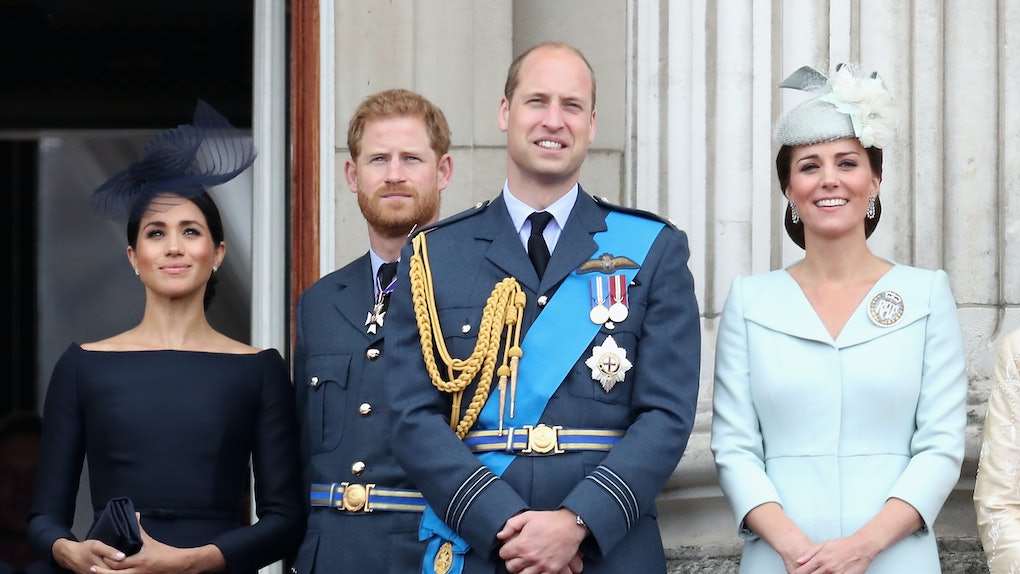 There's been so much rumored drama coming out of Buckingham Palace lately that for a while there, it looked like some of the royals might opt to Grinch out and go their separate ways for the holidays this year. Tensions were reportedly rising between Meghan Markle and Kate Middleton, as well as between Prince Harry and Prince William, worrying the royals' fans (despite the Palace's statements to the contrary). So will Meghan, Harry, William, and Kate spend Christmas 2018 together? It's officially time to deck the halls and breathe a sigh of relief, because it looks like it's going to be a very "peace on earth" kind of holiday for the royal family after all.

Despite all the reports of fighting among certain family members, the Duke and Duchess of Sussex will spend Christmas at Sandringham with the Duke and Duchess of Cambridge, according to The Daily Mail. And not only that, both couples will reportedly be with the queen in Norfolk for all of the family's traditional holiday celebrations. In fact, People is reporting that Meghan Markle and Prince Harry, and Kate Middleton and Prince William already rolled up to the palace on Dec. 19 for a Christmas lunch ahead of Queen Elizabeth's visit to Sandringham for the holiday. Which means the seasonal festivities have already begun, you guys!

Gotta love the magic of Christmas, am I right? I mean, it was only a few weeks ago on Dec. 1 when it was reported that while Harry and Meghan would be at Sandringham for the holidays, William and Kate were planning to spend Christmas with the Middleton family in Bucklebury, Berkshire. But apparently, that was never actually the case.

"Reports regarding Christmas are wrong," a source told the Daily Mail. "Everyone is in Norfolk this year." Elite Daily reached out to the palace previously for comment on this report, but did not hear back by the time of publication.

So there you have it.

Anyway, according to the pictures published by People, Prince Harry headed over to the Christmas lunch on Dec. 19 with wife Meghan Markle (who was also there last year while still his fiancée). Harry did all the driving, while the mama-to-be sat shotgun in a lacy black top with a high neckline.

Prince William and Kate Middleton also drove over to the palace for some holiday cheer with their son, Prince George, and daughter Princess Charlotte, who have already been to, like, 50 of these things. Or, you know, like at least three of them. (It's unclear if Prince Louis was also in attendance.)

Anyway, the pair sat in back with their nanny while William took the wheel, and Kate waved at fans through the car window. The duchess was decked out in a frilly, bright pink top that looked gorgeous, from what I could see. Which just begs the question: Was she trying to give us all a hint that Meghan and Harry's baby is going to be a girl?

I do love that she wore pink to a holiday party, though. Maybe Meghan's rebellious side is starting to rub off?

Either way, the news that the two couples have already come together for the Christmas season is just one more reason everyone should finally put all those feud rumors to rest for good. It's also an important reminder that at the end of the day, it's not what's under the tree that matters, it's who's gathered around it.

More like this
Here's Why Harry & William Will Not Walk Together At Prince Philip's Funeral
By Brandy Robidoux
Here's What Harry & William Said To Each Other At Prince Philip's Funeral, According To Lip Readers
By Brandy Robidoux
Are Meghan & Harry Getting Paid For Their Netflix Show? Here's The Deal
By Sydney N. Sweeney
Stay up to date