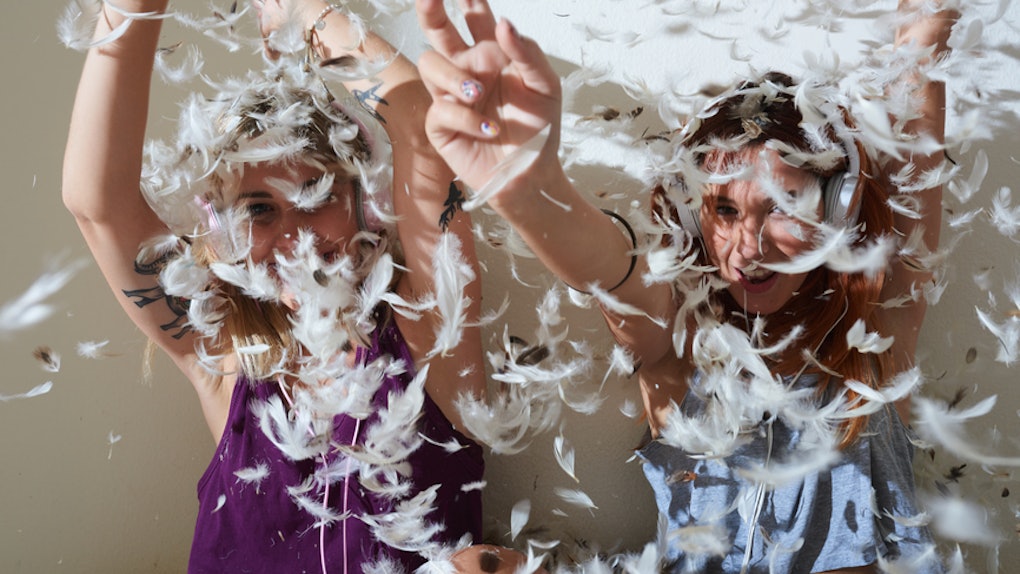 Will Living With My Best Friend Ruin Our Relationship? Here's How To Make Sure It Doesn't

When the time comes to search for a roommate, you might get the bright idea of forgoing the risk of living with a stranger, and opt to live with your very own best friend instead. Initially, it sounds like an amazing idea: You guys already know you're obsessed with each other, so what's the worst thing that can happen? Well, there's always the chance that living with your best friend could hurt your relationship, and depending on the people involved in the situation, it may not work out for the best.

"For many, living with your best friend sounds like a dream come true, and it can be," Doctor Lindsay Henderson, Psy.D., a psychologist who treats patients virtually via telehealth app LiveHealth Online, says in an interview with Elite Daily. "But it can also be a challenge, as any roommate situation presents many hurdles to work through."

It might be easier, Henderson points out, to talk about your frustration over the mess in the kitchen with someone you aren’t going to happy hour with later that evening, you know? Plus, if this is your first time searching for a roommate to live with, she explains, you might discover along the way that you're actually someone who values and prefers the quiet and alone time you'd get from co-existing with someone who's only an acquaintance to you, as opposed to hanging out around the clock with your live-in bestie.

Basically, just because your friendship is effortless, does not mean the same will apply to your living situation.

When you're entering a living situation with your best friend, Henderson says, things can get super casual, super fast. You guys are really comfortable with one another, so the rules about how to clean the apartment, how to pay the bills, etc. can all slide out the window in the blink of an eye.

"As with any new co-habitating situation, whether your roommate is a stranger or your lifelong best friend, it is important to have an open and honest conversation about boundaries, expectations, and rules before moving in together," Henderson advises.

Even if you feel like you and your best friend know each other inside and out, and you click on just about every level of your friendship, it's crucial to acknowledge this decision to move in together as the pretty monumental thing that it is.

"The idea [of], 'we are best friends, we will just figure it out,' is dangerous," Joshua Klapow, Ph.D., a clinical psychologist and host of The Web Radio Show, tells me. "As best friends, you are in a position to set rules in a more comfortable way, but don’t let your comfort with one another underestimate the challenge that living together poses."

Basically, as awkward as it may seem to lay out solid ground rules with your best friend, it’s important to view your living situation as a contract, or a new business endeavor, Klapow says. Communication is the secret to success in any living situation.

"Talk it out," he says. "Set the boundaries versus assuming you’ll [both] recognize them."

The tricky thing is, though, your idea of fair boundaries may clash with your BFF's perspective on the subject. For instance, you might think it's no big deal to have your SO sleep over a couple nights a week, but your bestie might think that's crossing a line, and that your partner should be expected to chip in with bills and groceries if they stay over regularly.

These things need to be discussed when you move in with anyone, but since your potential new roomie is also your best friend, these disagreements could create tension in your relationship.

"It is not unusual to disagree with your best friend when you are sharing the same living space," Henderson tells Elite Daily. "Even though it can be awkward, it is always best to have a direct conversation about any issues that do come up."

She strongly urges you to have these conversations with your ride-or-die in person, as opposed to over text or phone call. Even if you guys are used to having novel-length, heart-to-heart exchanges over text, Henderson says it's important to get used to communicating face-to-face as you approach this new living situation.

"[Texting] can be OK for little things," she explains, "but it is easy to become less effective in written communications (i.e. passive aggressive or angry), and the tone of a note or text can often be misinterpreted."

If you do find yourself knee-deep in a tense disagreement about your living situation with your BFF-turned-roomie, Henderson says there are healthy ways to resolve things and keep the peace.

"Begin the conversation by recognizing what is going well in the living situation, and what you appreciate about living with them," she says. "Then, ask for feedback about what you are inadvertently doing that irks them."

More often than not, Henderson says, you and your friend are both doing or saying things that are getting on one another's nerves, but neither of you realizes how your behavior is coming off to the other person. For example, you may have been so focused on the leftover dishes your bestie left in the sink, that you had no idea she's actually been cleaning out the fridge every single week (and is low-key annoyed that you haven't thanked her for doing that).

Basically, Henderson says, try to stay as calm and level-headed as possible when giving your friend some feedback about their behavior, even if you feel really heated on the inside.

"Be ready with specific ways you would like things to change, and if appropriate, tell them why this is important to you, or how it may be affecting your relationship," Henderson tells Elite Daily.

Bottom line: Besties can live happily ever after — sometimes. But, just to play devil's advocate here, let's say you and your best friend took the plunge, moved in together, applied all of these healthy strategies to a T, and things still crashed and burned. Then what?

How do you salvage the friendship if things ultimately don't work out between you and your BFF-turned-roomie?

"Unfortunately, not all roommate situations are meant to be," says Henderson. "If you have made every effort to set clear expectations and boundaries, you have prioritized what is important to you, and practiced picking your battles, and yet you're still left feeling unhappy in your living situation, it may be time to look for alternatives."

It won't be easy, but Klapow says it's important to remember that "living together is testing your relationship and friendship," and when it comes down to it, you have to accept that this fallout does not have to mean you aren’t best friends, or that your friendship is automatically ruined. It simply means, Klapow explains, that you are best friends, who simply don’t do well living together.

Acknowledge that things just aren't working, he says, and remind yourselves you can choose to stop living together before the relationship completely fizzles out.

Henderson agrees, adding that, if things do go sour in the end, you may need some time apart to heal and forgive — and that's OK. Don’t be afraid to give each other this space, she advises. Good friends will usually find their way back to each other.