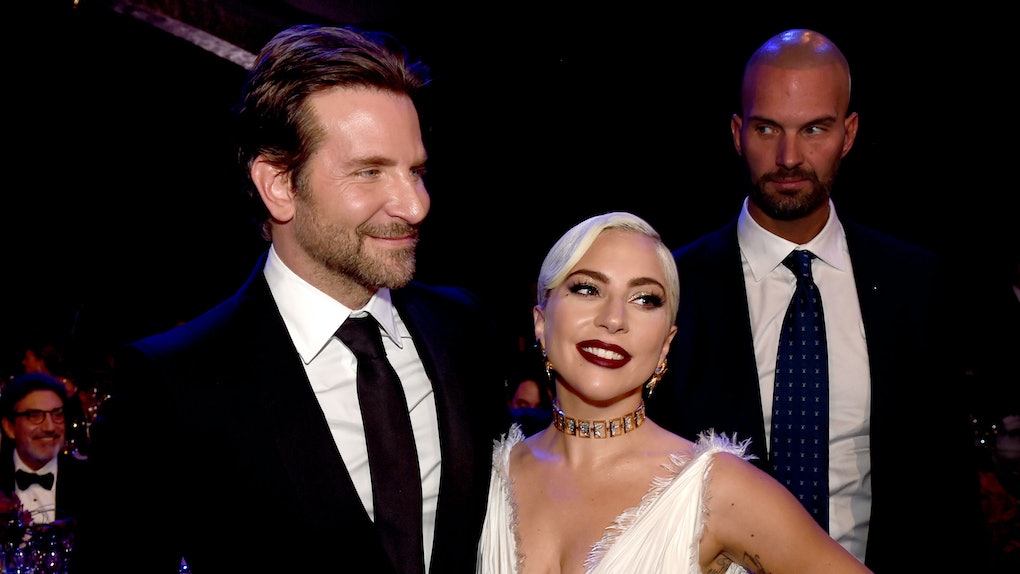 By now you've probably seen the amazing viral video of Bradley Cooper's surprise appearance at Lady Gaga's concert in Vegas where he jumped on stage to perform "Shallow" with her. If you didn't, you really need to go watch it ASAP because it's epic AF. Like, he played air guitar and snuggled up to her at the piano, you guys! Anyway, the duo will apparently also perform the Oscar-nominated song from A Star Is Born during the 2019 Academy Awards ceremony on Feb. 24, and I seriously cannot wait. I mean, despite both Cooper and Gaga having real-life significant others, I ship them hard, and I'm loving the fact that they're crushing the duet game. So will Lady Gaga and Bradley Cooper go on tour together, or what? Because 1) I would do anything to score a ticket to that shiz and 2) I'm pretty sure this collab would sell out even the most massive arena in like half a second.

Sadly, it doesn't look like a Gaga/Cooper tour — Gooper tour? — will be happening anytime soon. Because when it comes to hitting the stage with his talented co-star, the actor-director apparently gets kind of freaked out.

"It was terrifying," Cooper told E! News on Feb. 2 at the 2019 Directors Guild Awards re: Vegas. "I had to, like, zen out and just pray that I wasn't gonna ruin her show. Because, think about it — she just crushed it for two hours. And I thought, 'Please let me just be on pitch.'"

He was perfectly on pitch. But even so, Cooper is apparently not content to rest on those performance laurels for his upcoming Oscar gig.

"I’m sure I’ll be terrified," he told E!. Then he later had this to say about the possibility of going on tour with Gaga:

Booooo. I guess that's just a whole other bag, you know?

Anyway, you can watch the heartbreaking interview in its entirety here:

Meanwhile, Cooper was nominated for two DGAs — the top directing and first-timer awards — but left empty-handed, although he was honored onstage as a nominee by Hangover director Todd Phillips.

I'm gonna hold you to that, Coops!

Meanwhile, in addition to the nod for "Shallow," A Star is Born is nominated for seven Academy Awards in total, including Best Actor for Cooper, Best Actress for Gaga, Best Adapted Screenplay, and Best Picture.

The 2019 Oscars will air live from the Dolby Theatre in Hollywood, on Feb. 24 at 8 p.m. — which means Cooper and Gaga's next live performance is now less than three weeks away.

In the meantime, feel free to go off the deep end and fill that void with this video of the pair's surprise Vegas jam sesh.

You are so welcome.

More like this
These Tweets About BTS' 'Bang Bang Con 2021' Sum Up The Epic Performance
By Cianna Garrison
BTS' 'The Best' Japanese Album: Release Date, Tracklist, Music Videos, & More Details
By Michele Mendez
Are BTS & Coldplay Collaborating On A Song? Here's Why Fans Think It's Happening
By Michele Mendez
Stay up to date