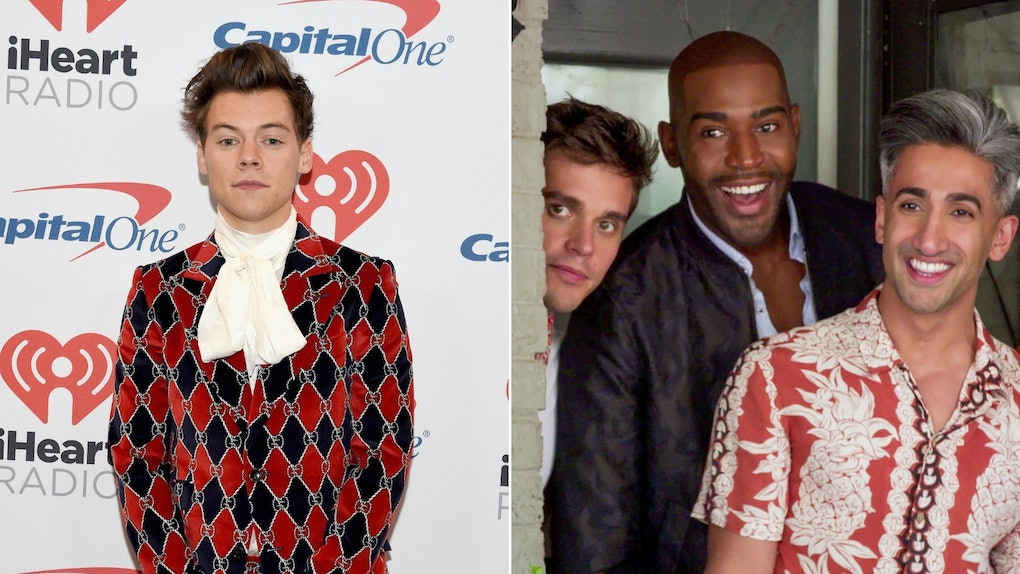 Will Harry Styles Be On 'Queer Eye'? The Singer Was Spotted With The Fab 5 In Tokyo

It took less than a year for Netflix's Queer Eye reboot to explode into a national phenomenon, and now that the makeover show is filming its first new season since its big debut, fans are wondering whether some celebrity surprises may be in store of us this time around. And the first celebrity guest on the show may be a huge one. The Fab Five were spotted hanging out with Harry Styles during production for new Queer Eye episodes, so now we are all asking the same question: will Harry Styles be on Queer Eye? The former One Direction singer definitely does not need any style help, but he could still appear in a cameo on the show later this year.

All of this speculation comes from videos of Harry Styles hanging out with Queer Eye stars Bobby Berk and Karamo Brown over the weekend. Berk uploaded videos of the group hanging out at a karaoke bar in Tokyo, Japan to his Instagram over the weekend. The Fab Five is currently in Tokyo to film a four-episode special called Queer Eye: We're in Japan! that is due out later this year, following the release of Season 3. While at the karaoke bar, Styles and Berk performed Queen's "Bohemian Rhapsody" and Whitney Houston's "I Have Nothing." Check out videos of the night out below:

It is clear why the Queer Eye guys are in Japan, and Harry Styles seems to have been in the country for a while. Last month, video of Styles singing "Smells Like Teen Spirit" by Nirvana went viral, which he performed the song at another karaoke bar in Tokyo.

So could Harry Styles actually film a cameo in the Queer Eye Japan special? It is not totally out of the question — he seems to get along with the Fab Five and he is clearly in the area. Plus, there has been a lot of chatter about upcoming Queer Eye episodes possibly getting more star power now that the Fab Five has been buddying up with celebrities. But of course, Styles does not actually need the Fab Five's help himself, so don't expect him to be the focus of any of the episodes. Maybe he will just be part of one of Karamo's culture outings — a trip to the karaoke bar can be a great way for one of Queer Eye's "heroes" to loosen up a bit, and Styles is clearly a big fan of karaoke.

Unfortunately, fans will just have to wait until the Japan-set Queer Eye special comes out later this year to see if Harry Styles will make an appearance. The upcoming four-episode Japan special will debut after Queer Eye Season 3 drops later this year.