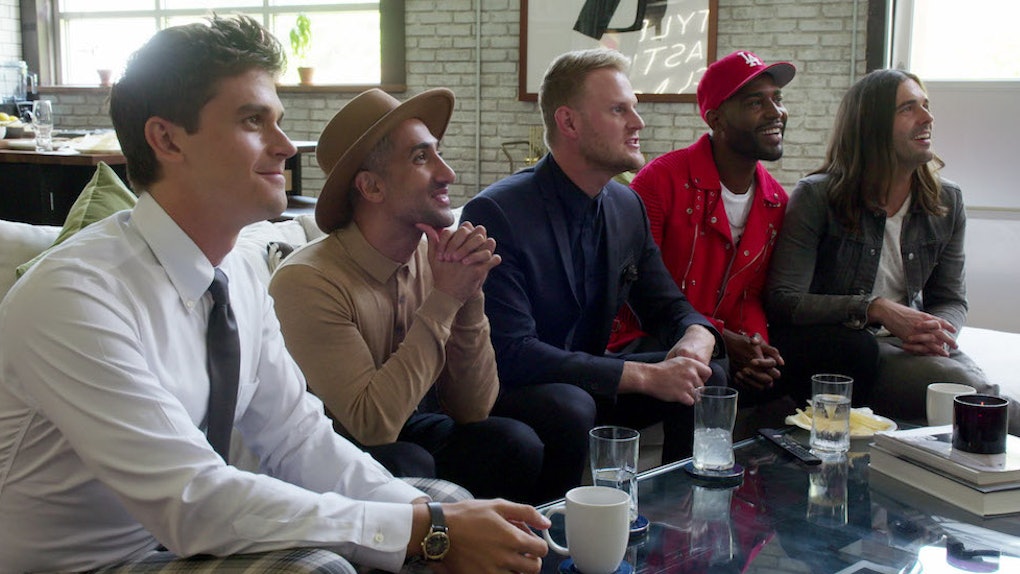 11 'Queer Eye' Secrets That Even The Biggest Fans Wouldn't Know

After two season, Netflix's rebooted Queer Eye series has already won the hearts of viewers around the world, but even though everyone is obsessed with Jonathan, Tan, Antoni, Bobby, Karamo, and all of the "heroes" that the Fab Five have helped, there is a lot about them and the show itself that fans may not know about. To get the full scoop on all things Queer Eye, check out these Queer Eye secrets that even superfans may not know about.

1. Antoni's T-shirts were sent to him by The Strokes themselves.

When the first season of Queer Eye premiered, viewers immediately noticed a trend in food and wine expert Antoni Porowski's wardrobe. The chef told Vulture that the show's stylists allowed him to wear T-shirts of the things he loves the most: the novel A Little Life and the rock band The Strokes. And it turns out, Antoni got those Strokes shirts straight from the source. Antoni said that Netflix sent over some of his Strokes shirts to get approved by the band, but The Strokes noted that Antoni's shirts were fakes, and sent him some official Strokes tees as replacements.

2. Bobby works more than double the amount of days as the other guys.

Fans quickly began to realize that Bobby Berk was the true unsung hero of the Fab Five. Although the interior design expert usually receives less airtime since his category is less interpersonal than the others, his work redesigning homes always packs the biggest wow factor at the end of each episode. In an interview with Architectural Digest, Bobby revealed that the other four Fab Five members usually only have to work three or four days a week, whereas his work continues throughout all seven days of the week.

3. Karamo was not the original culture expert, but found out about the job thanks to Andy Cohen.

Karamo Brown would not have known about the Queer Eye reboot in time if not for a chance viewing of Watch What Happen Live. Karamo told Vulture that he found out about the show when Carson Kressley appeared as a guest on the Bravo talk show, and he immediately called his agent. Apparently, Netflix initially turned Karamo down because it had already completed its casting, but Karamo managed to convince Netflix to go with him anyway.

4. Tan was cast via social media, and he didn't want the job at first.

While Karamo had to fight to get his part on Queer Eye, Tan France had the exact opposite experience. The stylist told Entertainment Tonight that Netflix reached out to him to be on the show after monitoring his social media presence. Tan said he did not feel like a good choice for the show, noting that he never enjoyed having his picture taken, and that he only went to the audition in order to make gay friends. When he wound up with the part, he was initially wary to take it, but now he says it feels like the job was made for him.

5. Antoni was the personal chef for the original Queer Eye food expert.

Antoni Porowski's casting story is probably the most traditional of the bunch. Antoni had been close friends with Queer Eye for the Straight Guy's food expert Ted Allen for years before Netflix announced its reboot, and Allen was the one who introduced Antoni to the casting team. Before landing his part in Queer Eye, Antoni worked as Ted Allen's personal chef and assistant, Allen revealed to Vanity Fair. When some viewers began to criticize Antoni's simplistic recipes, Allen defended his friend, saying that Antoni is an excellent cook who has taught Allen a lot about cooking.

6. Jonathan can change a tire in less than 5 minutes.

Jonathan Van Ness is not only a an expert at styling hair; he's also a master mechanic. The grooming guru revealed to the website We're a Big Deal that one of his hidden talents is the ability to change a car tire in under 5 minutes, crediting his dad with teaching him the skill.

7. Many of the Fab Five have starred in shows before Queer Eye.

Queer Eye may not be the first time that you have seen the Fab Five on your TV screens. Karamo got his start as a contestant on The Real World: Philadelphia back in 2004, and Jonathan Van Ness was already beloved by Game of Thrones fans for years due to his Funny Or Die recap series Gay of Thrones. Antoni has starred in a number of movies since he began acting in 2008, including guest spots on shows The Blacklist and Blue Mountain State. Tan and Bobby are the only two members of the Fab Five to not have previous TV experience before Queer Eye.

Speaking of acting, Antoni is still taking parts in films alongside his role on Queer Eye. Antoni's IMDb page reveals that he has three upcoming films, two of which feature him co-starring with James Franco. Antoni is working with Franco on the horror film Blood Surf and the drama The Pretenders.

9. Karamo did not know he had a son for years.

Karamo's initial rise to fame on The Real World in 2004 also brought a shocking revelation: He was a father. Karamo told Parents.com that he came out as gay when he was 16, and had never learned that his girlfriend from when he was 15 had gotten pregnant with his child. That all changed after he appeared on The Real World 10 years later and returned home to find a subpoena for child support at his door. Once he found out he was a father, Karamo took full custody of his son, Jason, and soon afterwards adopted Jason's half-brother Chris as well.

10. Justin Theroux is best friends with Jonathan, Tan, and Antoni.

Queer Eye has attracted a bunch of celebrity fans, but one in particular has gotten close with the Fab Five in real life. Justin Theroux revealed on Jimmy Kimmel Live that he hangs out with Jonathan, Tan, and Antoni all the time in New York. The group cooks meals together, designed clothing for Pride weekend together, and even had a pretty raunchy arts and crafts night together.

11. Some of the heroes have gotten rid of the things the Fab Five made for them.

Not everything that the Queer Eye guys give to their heroes winds up sticking around past the episode, apparently. Karamo revealed that Joe, the aspiring comedian from Season 1, wound up taking down the website that Karamo made for him. Similarly, Bobby revealed that AJ, the formerly closeted gay man from Season 1, sold the condo that Bobby renovated for him shortly after the episode aired.