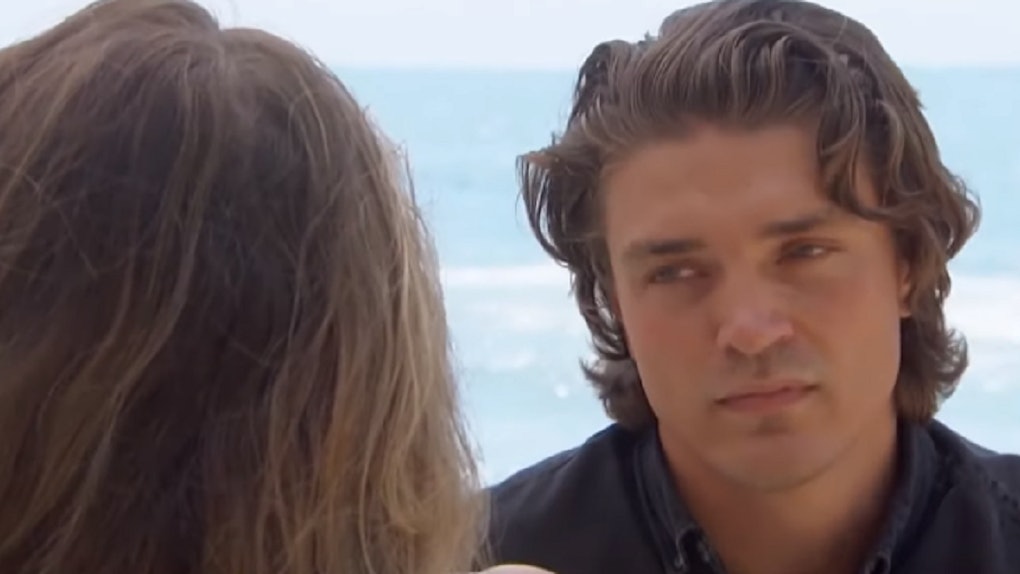 Will Caelynn Leave 'Bachelor In Paradise' With Dean? Week 5 Ended On A Cliffhanger

Earlier on this season of Bachelor in Paradise, Dean Unglert stepped away from a developing relationship with Caelynn Miller-Keyes, saying he recognized that he couldn't commit to the serious bond she wanted. However, when he returned to Paradise in Week 5, he asked her for a second chance, leaving fans dying to know: Will Caelynn leave Bachelor in Paradise with Dean? Week 5 ended with a cliffhanger about the fate of their relationship.

Dean's initial arrival in Paradise lifted Caelynn's mood after she called out fellow contestant Blake Horstmann supposedly ignoring her after they hooked up at the Stagecoach Music Festival before filming the show. Surprisingly, Dean's mustache and newly nomadic lifestyle were apparently what Caelynn needed to feel better, though she knew Dean came with a shaky dating reputation within Bachelor Nation. When she prodded for more details about how they could be a couple in the real world, Dean faltered. He ensured her he was enjoying their time together, but said he knew "dinner parties and talking about our emotions" wasn't his thing. "I think you'd be miserable as my girlfriend," he told her.

After giving her a rose during Week 4's elimination ceremony, Dean finally revealed to Caelynn that he couldn't string her along. "I didn't expect to have an actual, real connection with someone," he said in the Aug. 27 episode. "But you know my weird history with this ... I know I won't be able to get to where you need me to be at the end of this."

Soon after Dean left the beach, the arrival of Connor Saeli distracted Caelynn from heartbreak, intriguing her with his policy of openness and honesty in relationships. "Connor and I are exploring what we have and I'm happy," Caelynn said. "I deserve this after the hell I've been through."

Connor and Caelynn even progressed enough to mention a trip to the "boom boom room," aka a hook-up session. "I completely forget about Dean," Caelynn admitted. "I'm just happy I didn't end up with him. I don't want to live in a van. No more mustaches for me!"

But just as Caelynn was settling into her new potential happily ever after, Dean returned to Paradise sans mustache to voice some new thoughts. Connor wasn't thrilled, telling cameras that Dean should "go back to [his] f*cking van."

Taking Caelynn aside, Dean said, "I showed you the worst parts of myself and you still chose to accept those parts about me ... We got closer and closer and I always tried to keep you at arm's length ... When I left, I made a decision that I thought was best for you ... I flew back to San Diego and the entire flight back I couldn't stop thinking about you."

While Connor felt confident about their relationship, Caelynn was wavering. "I don't even know what I'm thinking right now," she told Dean. "With you, we had something special ... You challenged me and pushed me and you scared me at the same time. I'm really confused ... I just want a partner in life."

Dean agreed. "It just took me a little bit longer to realize that," he said. "I knew I needed to come here and tell you I wanted us to try and be in a relationship."

Considering her fresh start with Connor and lingering feelings for Dean, Caelynn was torn between the two men. But Dean persisted in trying to win her over: "I decided I needed to stop running away from the good things in my life," Dean told her. "I know it's a big, heavy thing, but I came here to ask you if you would leave Paradise with me today."

As of the Sept. 3 episode, it's not clear what path Caelynn chose. "I have no idea what to do," she told cameras after Dean's confession.

Fans will have to wait and see what she decides. Season 6 of Bachelor in Paradise continues at 8 p.m. ET on Tuesday, Sept. 3, on ABC.