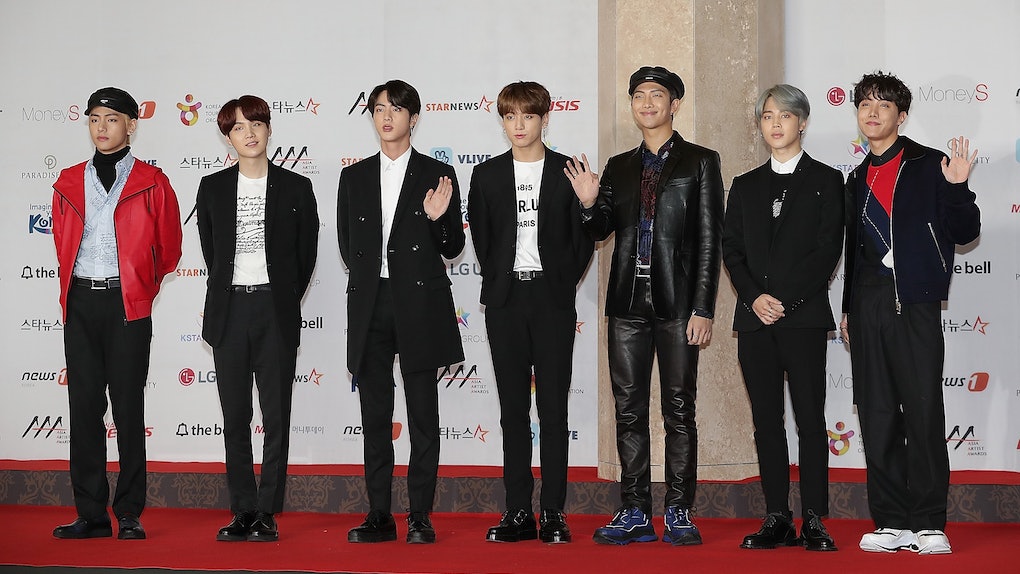 Will BTS Be At The 2019 Asia Artist Awards? Here's What To Know

For a BTS dan, catching a 24-hour break from fangirling is nearly impossible, as BTS is continuously rolling out content for fans, making jaw-dropping red carpet appearances, and putting on flawless award show performances. With the Korean award show season now in full swing, the ARMY is marking their calendars for any award show BTS has a part in, whether they're attending, performing, or just nominated. BTS has already confirmed a few appearances, but now fans are asking whether BTS will be at the 2019 Asia Artist Awards.

This year, the Asia Artist Awards (AAAs) will take place on Tuesday, Nov. 26, but, unlike previous years, the ceremony will not be held in Korea. Instead, the biggest musical acts will gather in Hanoi, Vietnam. BTS is nominated for Best Male Group, a fan-voted category, and, at of the time of publication, with 38.4% of total votes, they are just a hair behind Stray Kids, who currently have 42.7% of votes. Whether BTS wins an award or not, the BTS ARMY is questioning if BTS will be at the ceremony.

For the past few months, the AAAs have been gradually revealing its performance lineup. So far, the lineup includes just about every K-Pop soloist and group except for BTS.

Unfortunately, with the award show around the corner, it seems BTS likely won't make an appearance, especially because BTS is already booked for several performances close to the show's date.

On Nov. 23 and 24, BTS will be in Japan for their fifth official fan meeting. The group will then perform at the Melon Music Awards in Seoul, Korea, on Nov. 30, and then at Jingle Ball in Los Angeles on Dec. 6.

Since the AAAs are taking place on Nov. 26, it's possible BTS could squeeze a trip to Vietnam in before returning to Korea, but, as it stands now, BTS isn't likely to appear. Whatever the outcome, the BTS ARMY can still look forward to BTS' confirmed appearances so far.

More like this
The 'Glee' Cast's Tribute To Naya Rivera At The 2021 GLAAD Media Awards Was So Moving
By Abby Monteil
Here's Why Meghan Markle Reportedly Isn't Attending Prince Philip's Funeral
By Cianna Garrison
Will BTS' McDonald's Meal Include Photocards? Here's What ARMYs Should Know
By Michele Mendez
Stay up to date