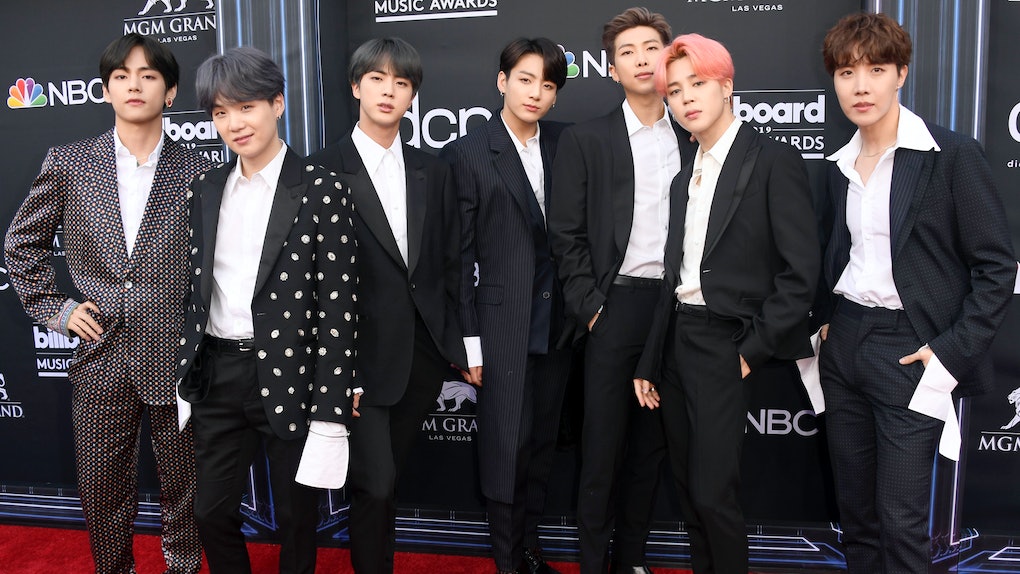 Will BTS Perform At Jingle Ball 2019? Big Hit's Response To Rumors Has Fans On Their Toes – UPDATE

Do you hear that? That's the sound of the BTS ARMY freaking out now that BTS is back from its extended summer break. The BTS boys haven't even been back at work for a week, and already, fans are hankering to know what they're going to be working on next. Rumor has it that one of their next live performances (outside of their previously scheduled final tour dates) will be at a hella popular American music festival. So, will BTS perform at Jingle Ball 2019? Their fans sure think that jingle bell ROCKS. (Was that lame? I am so sorry.)

UPDATE: Don't ever doubt the BTS ARMY's investigation skillz, because it looks like they were right about everything. iHeartRadio confirmed in a Sept. 27 report that BTS will perform at KIIS FM's Jingle Ball on Dec. 6.

PREVIOUSLY: According to Soompi, Ilgan Sports (a Korean outlet) reported on Sept. 18 that BTS is planning to perform at Jingle Ball this year. That's an exciting prospect for their fandom, as it gives them another opportunity to see their favorite music group if they didn't get to see them already on their Speak Yourself tour. Soompi reports that the group has been adjusting their schedule over the last couple of months to accommodate iHeart Radio's request. The lineup for the show won't be announced until further into the fall. Big Hit Entertainment has already responded to the rumors.

“We announce our artists’ scheduled activities after they are confirmed," Big Hit said, according to the Soompi report. If that statement was supposed to keep all the BTS speculation at bay, it was a hit and a miss. Because that's not a no, y'all! Fans are cautiously excited about the possibility of BTS performing at Jingle Ball.

Some fans are hoping BTS will perform at one of the various Jingle Ball locations that aren't Los Angeles (the festival tours around the country), but confirmation that the group will be performing for iHeart Radio at all obviously needs to come first.

This is an exciting possibility, though! BTS' concerts for the rest of 2019 are hard to come by, and they're also in different countries, so it would be hard for their American fans to see them on one of these final Speak Yourself tour dates. But a Jingle Ball gig would be much easier for their fans to get to! It's one of the most star-studded festivals of the year, with big names like Taylor Swift, Ed Sheeran, and Shawn Mendes being some of the show's past performers. So it would make sense for BTS to perform at this festival, given they're the most popular boy band in the world right now.

Jingle Ball's lineup is typically announced in October, so fans will have to wait a couple more weeks before they find out if BTS is included in the lineup. As for tickets, those aren't on sale yet either. Fans of the festival can expect to see tickets go on sale soon after the lineup is announced.

In the meantime, BTS fans can rejoice over the fact that BTS' summer break is over, and the boys are officially back together and back to work. The guys were seen arriving at the Incheon International Airport in South Korea on Sept. 16, most of them filming themselves on Go Pros. Maybe they were hopping on a flight to some new Bon Voyage filming location before they hop over to L.A. to seal their Jingle Ball deal?!

This article was originally published on Sep. 18, 2019

More like this
Big Hit's Response To Rumors BTS' 2021 Comeback Is In May Is Making ARMYs Suspicious
By Michele Mendez
These Tweets About BTS' 'Bang Bang Con 2021' Sum Up The Epic Performance
By Cianna Garrison
With 'Like Water,' Wendy Found Her Biggest Cheerleaders In Her Red Velvet Bandmates
By Michele Mendez
Stay up to date