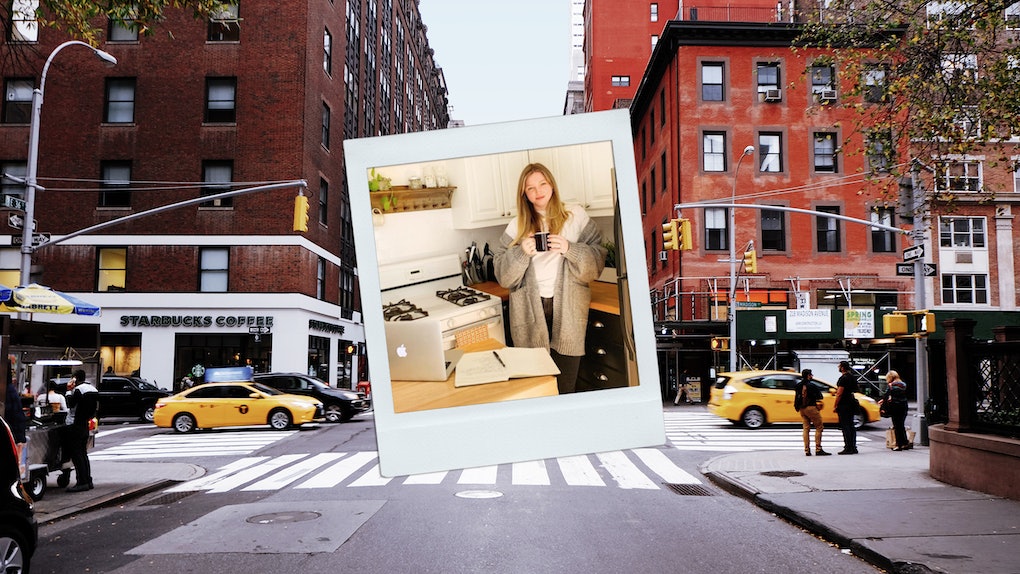 Of the many, many strange aspects about being in your early 20s, one of the most bizarre things is that life's built-in breaks simply stop. There is no longer a summer break or a new semester or a spring break to use as an opportunity to reset, or restart, or reevaluate. Growing up, I had always been someone who craved the chance to set a new goal timed to a new school year. I was the person who always planned to use the summer on some big, grand project. But when I found myself at the end of my early 20s, I realized that I hadn't paused to ask myself what I actually wanted in a long, long time. And when I did, the answers scared me.

I had moved from Florida to Manhattan roughly three weeks after I graduated from college. I was 22, had never visited the city for more than three days at a time, and had zero friends there. But I was moving there for a job as an Associate Fashion & Beauty Editor at Bustle, and that is what mattered to me. It was a new, thriving company. It was a role that I had always dreamed of. And, as shocking as it was to me as a journalism major, it was an actual job. Part of me hadn't even expected to get a job by graduation, let alone a job that had always seemed so impossible that I had barely even considered it as a real option. This sense of disbelief that my job was, in so many ways, what I had always dreamt of — and that it was what a thousand people at my college had always wanted, too — never really left me. So for three years, I worked really hard. I chased more opportunities, bigger titles. I eventually moved up to Editor and then Senior Editor, and through it all, the idea of how lucky I was to even have the chance to do so never really left my mind. So when thoughts would enter my mind that had me questioning if I wanted this to be my long-term career, or if I really wanted to be in New York at all, I became really good at pushing them away. The idea of giving it all up when it was what I once wanted so badly and what so many other people wanted terrified me. And then one of my best friends died.

It was the end of 2017, and instead of planning to go home for Thanksgiving, I was planning to go home for my 24-year-old best friend's funeral. Instead of writing essays at work, I was writing her eulogy. It's been a little over a year since then, and I have forgotten exactly nothing about that time. Not my body collapsing on the stairs when I heard the news. Not me literally begging for time to go faster, to skip ahead, so I wouldn't have to feel that way anymore. Not the anger. And certainly not the sudden, inescapable urge to tear down everything about my life and start over.

When my grief became more manageable, I channeled it into doing something. I felt like I had to put that grief into something, and I also had found myself face-to-face with the realization that all those questions I had been ignoring and pushing down about what I wanted out of my life were all that really mattered. My title didn't matter. The idea of a dream job didn't matter. How much I felt OK about any aspect of my life didn't matter if I thought there was a version of things that would make me happier. If I wanted to change something, I owed it to my current self to do it. Because whatever future version of me or my life that I was waiting for simply wasn't guaranteed. It didn’t exist. So I started asking myself those same questions about my career and my life again, and this time I didn't ignore the answers. I acted on them.

I had always dreamt of building my own brand. So, at the start of 2018, I got to work. I connected with branding designers, photographers, and web designers over the course of a little more than a year. I wrote copy for a new personal website describing how I would create my own business that combined freelancing, consulting, and content creation for brands. I built all of this up as if I was going to take the plunge, all while not being sure if I could or would actually do it. And then somewhere along the line, I looked at all the things I had created and I was convinced I could do it. So I made the decision.

I then cemented in my mind what I had known deep down for years: that I didn’t want to live in New York. I wanted more space, somewhere quieter, slower. To be able to be home with my dog more. To be closer to family and friends. To not spend hours commuting every week. To (maybe) save some money one day. My fiancé wanted the same things. So we made the decision. We picked a place and a date and we did it.

And then I quit my job. There was no part of any of these decisions that didn’t scare me, but this one terrified me the most. I was afraid that the people I respected at the company would think I wasn’t grateful for the job, or didn’t realize just how amazing of an opportunity it was for me, or that it still could be had I chosen to stay. I was even more afraid of what other people in the industry would think. Would they think I was making a ridiculous decision? That I was stupid to think I could build something on my own? Would they laugh?

I’m a little more than two weeks into my new career in my new city, and I still don’t know the answers to those questions. I’m sure there are people who doubted my decision, but mostly what I focus on now instead of those questions is that I am happier. I wake up every morning and I am happy to be doing what I’m doing. Not content or fine or OK enough, but happy. Some things are hard and there are frustrations and fears still, but I have never asked myself once if I made the right decision. And even if it all fails, at least I did it. I listened to myself and I took a chance.

New job and new city or not, I am still just a 26-year-old person with a lot to learn. But what the past two years have taught me is that life does still have built-in chances to reevaluate everything and rebuild it if you pay close enough attention. They’re not always pretty, but they’re there. There is no shape my life could have ever taken that would make losing my friend bearable. But, still, I choose to live every day differently now because she isn’t able to. I choose to remember that there is no future self, future job, or future home promised to me. That if I want to build my life into something different, I owe it to myself — and my friend — to take a deep breath and do it.

More like this
Lil Huddy's "America's Sweetheart" Is About Charli D'Amelio, & He Admits It – EXCLUSIVE
By Brandy Robidoux
Boho Locs Founder Lulu Pierre On Overcoming Self-Doubt To Create A Booming Brand
By Brittany Leitner
Kehlani Officially Came Out As A Lesbian On TikTok
By Lydia Wang
Stay up to date