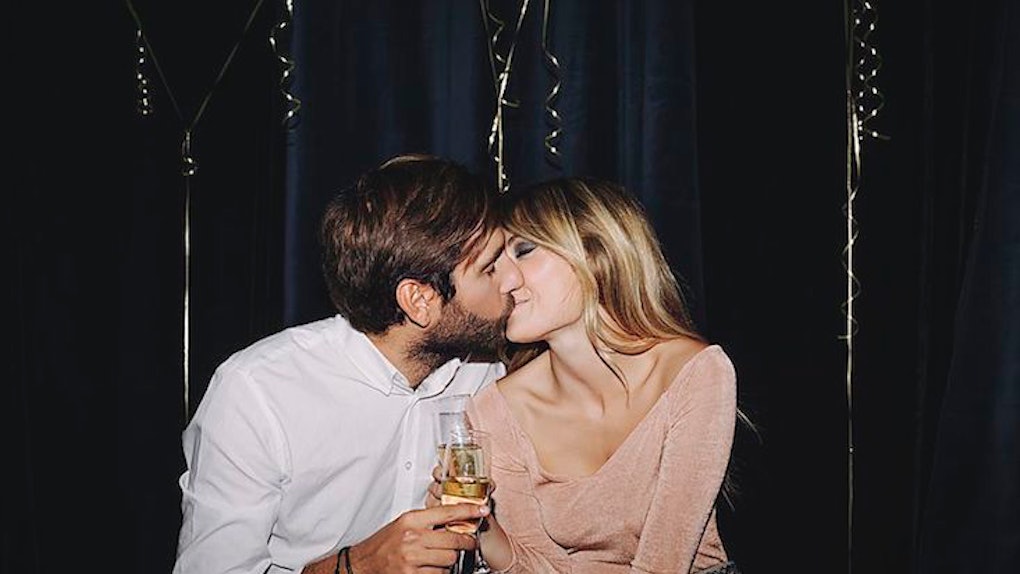 If you haven't already locked in a winter cuff, you might be on the prowl for something a little more casual this year. Sure, a hometown hookup is risky but what about getting it on with an old crush? Should you hook up with your high school crush over Christmas break? Is it even worth it? I say yes, it is. Honestly, there are worst ways you could spend your time at home this Christmas — like eating raw cookie dough until you puke. Finally hooking up with that person whose name you scribbled on every inch of your homework agenda isn't necessarily a terrible idea.

High school crushes are weird because, if you never acted on them, they sort of stay with you forever. There's something about not knowing what could have been that leaves you emotionally paralyzed — at least, where that person is concerned. Pair that with the lingering embarrassment of all the stupid things you did in front of your high school crush and it's no secret why you're looking for some sexual retribution this holiday season. For these reasons, I say, if the opportunity to hook up with a high school crush presents itself over Christmas break, go for it!

You'll get the closure you need.

There's nothing 16-year-old you would have wanted more than to go out with this person. Maybe it was the way they chewed their gum or twirled their hair or maybe they had a rebellious Ferris Bueller thing going on that you found irresistible. Either way, you've been dying to see if there are sparks between you two for years. It would be wrong not to swipe right or send your high school crush a cute text message over Christmas break to get things going — you know, for research purposes.

I'm all for hooking up with someone from high school because it's sentimental, just like the season. It might be someone you always had a thing for but it never worked out. Or someone you have unfinished business or history with... I love the idea! In fact, right now, I'm talking to a girl I used to have a crush on a few years ago, right after high school. We'll both be home soon so I'm open to what could happen. We're both single for the holidays and I think we both know what this is.

Like Eric points out, reconnecting with someone from your past during the holidays always seems appealing because emotions tend to run high at this time. You're feeling nostalgic and you don't want to be alone — it's totally understandable.

Relationship expert and founder of eFlirt Laurie Davis recently told Elite Daily that if you want to reconnect with a high school crush over the holidays, "Start the conversation by asking a pointed question about what they are up to — all the better if you have more context because you've seen some of their social media updates." Davis explains that bringing up your shared past is a good way to break the ice and to find out once and for all if they had a crush on you too.

Just because seeing this person might clear up a couple things from the past, doesn't mean it's destined to go exceptionally well. If the entire experience gives you all sorts of Sixteen Candles-themed nightmares filled with adolescent dread, it's still likely to be enlightening in one way or another.

You might learn a valuable lesson in the process.

Don't get me wrong. Hooking up with your high school crush might finally give you the answers to a few of those pesky questions that keep you awake at night but the answer might just be that your crush was a jerk back then — and they're a jerk now.

In high school, I had a crush on this guy who was a year older than me and seemed way out of my league. We'd flirt over text for hours, he'd promise to come by and pick me up, and then would never show up. Of course, that only made me more into him... Anyway, we stayed in touch after we both graduated, and about four years later, he started making it very clear that he was (finally!) legitimately interested. We wound up hooking up and I felt so victorious. It was weird — he apologized for stringing me along in high school, explaining that at the time, he thought I was 'awesome' but he 'really wanted a cute, little, blonde girlfriend' (I'm tall and brunette). Despite the neg, I felt like I had succeeded in landing the guy that I had wanted all those years ago. I was giddy. That is... until I invited him over for a second time, he promised he was 'on his way' for hours, and then never showed. I thought I was so much smarter and savvier than I had been back in high school, but I spiraled right back to feeling young and naïve. I wish I could say that people grow and change, but my experience with my high school crush makes me think otherwise.

As teens — and even well into adulthood sometimes — it's not uncommon to idolize people for the wrong reasons. Because we're so smitten with them, it's easy to gloss over certain offensive behaviors or off-handed remarks they might make. For example, in high school I was infatuated with the bad boy who cut school at least three times a week and played in a wildly mediocre rock band. I loved how edgy his whole lifestyle seemed, which I'm positive now had a lot to do with the fact that I spent 13 years at all-girls Catholic schools. Unsurprisingly, his band never took off and his current lifestyle choices aren't ones I would ever make for myself. I realized that, as I got older, I became more honest with myself about what I was willing to accept from a partner. Although I never got to hook up with my high school crush, like Hannah, I needed to see him outside of high school to figure things out.

So why do I recommend hanging out with this person if it's possible they peaked in high school? Because maybe you need to play this one out before you're convinced it was never meant to be. Maybe 16-year-old you would love to finally cross this person off your fantasy list. Or maybe you just need a quickie to get you through another night of Christmas caroling with the fam.