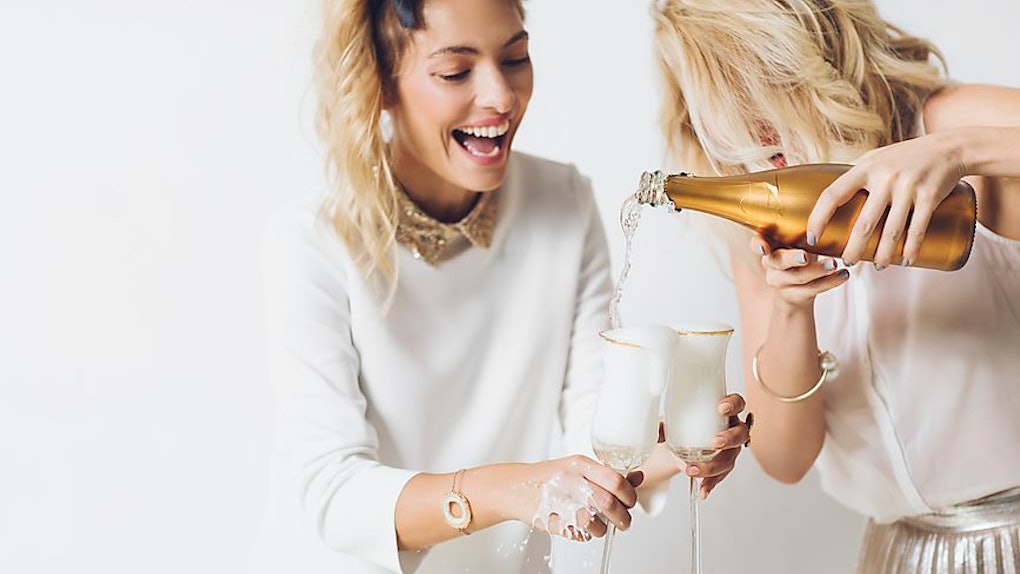 Why Does Champagne Give You A Headache? Here's How To Avoid The Pain On New Year's Eve

When the clock strikes midnight on Jan. 1, 2018, every household, hotel room, and restaurant is bound to get a little boozy to celebrate the fresh start of the new year. Champagne has become the drink of choice to ring in the new year on a bubbly note, and when you’re in high spirits, it can be hard to turn down a second (or third) glass. If this is supposed to be the good stuff for celebratory toasts, why does champagne give you a headache following the festivities?

Sipping champagne on New Year’s Eve is as much of a given as drinking PSLs in October. Throwing back some bubbly has become a tradition, but unfortunately, so has the inevitable throbbing in your head after the fact. It’s kind of hard to be all smiley and hold a decent conversation when your forehead feels like it’s about to rupture, so how can this be avoided without sacrificing your celebratory spirit of choice?

The first step is to understand why champagne causes such agonizing headaches in the first place. The obvious answer is because, even though it’s the prettiest bottle on the shelf, champagne is still alcohol, and alcohol dehydrates the body, which often leads to headaches.

But champagne in particular is also full of added sugars, which could be another root cause to the problem. Dr. Josh Axe, D.N.M., C.N.S., D.C., founder of DrAxe.com, best-selling author of Eat Dirt, and co-founder of Ancient Nutrition, tells Elite Daily that such high sugar content “causes a drop in blood sugar,” which speeds up, and worsens, hangover symptoms.

While it's tempting to keep on sippin' on, there are ways of doing so that don't have to lead to a monstrous hangover. Here are a few ways to you can keep the party going and avoid a champagne headache on New Year's Eve.

1. Have A Glass Of Water In Between Toasts

This golden rule is one to live by regardless of whether you're partying with champagne or margaritas. For every glass of alcohol you consume on New Year's Eve, one of the best and smartest things you can do to prevent a headache is to drink a glass of water.

Boston-based registered dietitian and Boston 25 News' What’s FRESH Around Town segment host Stephanie Ferrari tells Elite Daily that the oxygen content "will offset the carbon dioxide in the bubbles, and the fluid will keep you hydrated, thus preventing a hangover."

2. Don't Drink On An Empty Stomach

Another rule of thumb to keep in mind when you know you're going to be drinking a few glasses of champagne to celebrate the new year is to make sure whoever's hosting will have something to snack on. If options are limited, volunteer to bring along a healthy appetizer or two to soak up the alcohol while you sip.

It's really tempting to snack on finger foods like mozzarella sticks and cheesy potato wedges when you're in the party mood, but according to Dr. Axe, salty, greasy delicacies won't help the headache. "Food in your stomach reduces how high your peak blood alcohol concentration can get, by up to one-third," he tells Elite Daily. "Opt for high-protein foods and complex carbohydrates to help keep blood sugar levels stable."

3. Don't Smoke While You Sip

Smoking isn't a healthy habit to pick up in general, but it's not uncommon for people to smoke to enhance a drunken buzz, even if they wouldn't consider themselves smokers in general.

If you know champagne always gives you a nasty headache by the end of the night, it's probably wise not to bum a cigarette off your friends, as Dr. Axe tells Elite Daily that the combination of nicotine and alcohol can worsen hangover symptoms.

4. Consider Taking A Supplement Before You Start Drinking

While eating the right foods before, during, and after you drink is crucial, you can better your chances of a pain-free party by taking restorative vitamins and minerals before you've consumed any champagne at all.

We all know superfoods are great for maintaining your health, but the one you'll need most for headache prevention is something called chlorella. Ferrari tells Elite Daily that the green algae helps "restore minerals in your blood and pull out toxins in alcohol." To reap the benefits, she suggests chewing on RECOVERYbits tablets the night before New Year's Eve with a handful of nuts for added nutrition.

In addition to chlorella, Dr. Axe tells Elite Daily that, according to a study published in The Archives of International Medicine, taking a prickly pear supplement four hours before drinking can also reduce hangover symptoms like headaches.

Think back to every time you've felt even slightly under the weather and opted to take a nap. Sleep makes everything feel better, from sickness, to broken hearts, to the worst hangover headaches.

It sounds cliche, I know, but sleep is the restorative process your body needs to get back up and running properly. Rather than clinking glasses for a third or fourth time, Ferrari tells Elite Daily it's probably a better idea to pass on the refill and go catch some Zs instead.