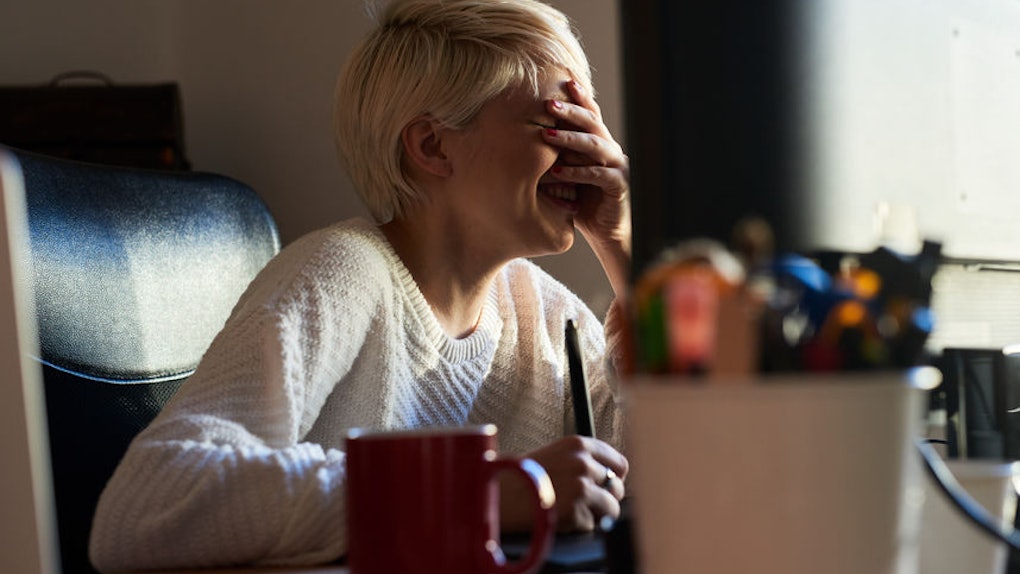 Why Do I Put My Keys In The Fridge Sometimes? Science Says There’s A Reasonable Explanation

I cannot begin to tell you how many times I've been putting away groceries, only to later discover I tossed my phone in the cupboards right alongside the black beans or the rolled oats. Sound familiar? I always assumed this happened because my body was in a groove putting things away, but it turns out, it may have been my mind that was working on autopilot. The reason why you put your keys in the fridge sometimes, or accidentally drive to your old gym right after you started a membership with a new one, is actually kind of logical, according to the results of a new study.

The research, which has been published in the Journal of Experimental Psychology, tested how strong the connection is between mental imagery and physical movements — in other words, the relationship between what your brain thinks you're doing, and what your body is actually doing. Thirty-two undergraduate students were asked to imagine tapping their fingers in a steady rhythm, but were asked not to physically tap (which sounds like my personal nightmare, TBH). They were then shown images of similar movements, and again told to ignore them as they continued to imagine tapping their own fingers.

It seems that the power of the mental imagery, along with the actual images the students were shown, were basically too much to handle. The study's results showed that many of them could not resist tapping their fingers IRL, even though they had been repeatedly asked to stay still.

Lead researcher James Colton, a University of Plymouth Ph.D. student, explained this powerful connection between mental imagery and physical actions in a statement,

These findings are a step change for our understanding of how humans control their own actions, and why they sometimes fail to do so. They do not necessarily represent a form [of] 'mind-control', but show that our actions typically follow whatever we imagine. This means that simply bringing up the correct mental image will make us act in the way we want.

However, Colton added, this also means, when you subconsciously imagine yourself completing other actions, you may catch yourself physically doing something you definitely did not intend to do — like drive to your old job on the first day of your new one, or put your laundry in the trash instead of in the dirty-clothes bin.

But mental imagery doesn't just cause you to make these everyday silly mistakes. The power of your mind can also help you accomplish your biggest goals in life.

While I'm pretty sure mental visualization can't make your celebrity crush fall in love with you (Colin Firth, I'm waiting for you, baby), you can use the science behind this study's findings to help you achieve some of your goals. According to performance psychologist Michael Gervais, Ph.D., simply imagining yourself completing something you want to do — whether it's a new workout move, or even something less concrete, like publishing a book — can play a huge role in making that dream a reality. He told Real Simple,

The most effective imagery involves all five senses. You should be so immersed in a mental image that it seems as if it is actually happening.

So instead of focusing just on how you'll feel when you achieve this goal, try to create a full scene in your mind of what it would really look like to accomplish it. What would your body be doing? What smells would your nose be picking up on in that moment? What might you hear in the background?

The effects of mental visualization might seem sort of far-fetched, but there's actually plenty of research to support the idea. For instance, a study published in the North American Journal of Psychology asked college athletes to mentally train their hip-flexor muscles — again, they were asked to mentally train these muscles, not physically. According to the study, this visualization exercise was actually enough to improve the athletes' physical strength by as much as 24 percent. Isn't that wild?

Look, I can't promise that you can become a professional bodybuilder while eating nachos on your couch and thinking about pumping all of that iron, but if science puts that much power in your own mind, it may be worth giving visualization a try.