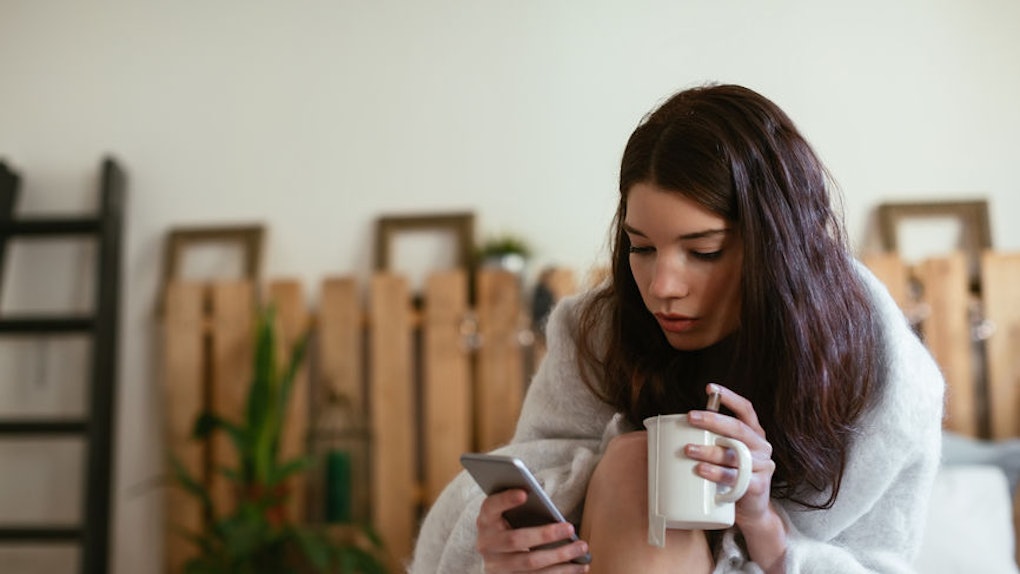 Why Do I Always Catch A Cold? Science Says It's Probably Not Your Fault

I don't want to be a downer, but when cold and flu season comes rushing in each year, do you ever feel like you're the only one in your friend group to always, inevitably, end up in bed, surrounded by tissues and/or a big gross barf bucket? While being consistently singled out by the sick fairy might simply seem like bad karma, the reason why you always catch a cold is actually a little more complicated than that. According to a new study, it might just have something to do with the way your own individual immune system works, or even the environment you find yourself in each day.

So before I get into how the study was done, it's important to understand how exactly you catch a cold in the first place. As explained in the study's press release on ScienceDaily, a little biological monster called the rhinovirus is the leading cause of the common cold. Now, when you're exposed to the rhinovirus, it typically enters your body through your nose (gross, right?), and what's supposed to happen is that the tiny little cells that line your nasal airways perk up and respond to clear the virus out before it can spread. But sometimes, as I'm sure many of us have experienced, that doesn't happen. Instead of being eradicated, the cold virus spreads and triggers symptoms that make you feel like total crap.

So why is it that some people always seem to get sick, while others escape the wrath of the common cold year after year? Is it simply a matter of having a healthier immune system? Researchers at Yale University set out to answer this exact question, and in order to do so, they studied a sample of cells from healthy individuals, gathered from either their lungs or nasal passages. The researchers then exposed these cells to the dreaded rhinovirus and came to find there was a stronger antiviral response (aka a more intense defense against sickness) in the nasal cells. In further tests, the researchers found that, while the nasal cells seemed to have a more defensive reaction against the virus, the cell samples from the lungs had a greater defense response against something called "oxidative stress," which basically just refers to cell damage that happens as a result of inhaling pollutants like cigarette smoke or car fumes, or even irritants like pollen.

But here's where things get really interesting: The research team also found that, when the lungs were fighting off oxidative stress from pollutants and the like, this more or less shut down this part of the body's entire ability to fight off any incoming viruses. The researchers then wanted to see if the nasal cells would react in the same way, so the team exposed those cells to cigarette smoke as a form of oxidative stress, and then to the cold virus immediately after — but the poor nasal cells couldn't fight off both. While the nasal cells were able to "survive" the cigarette smoke, they simply didn't have the strength to combat the cold virus at the same time.

I know that was a mouthful, but here's the gist of it: Basically, if you come into contact with the rhinovirus, aka the thing that triggers the common cold, if you're also simultaneously exposed to something as simple as tree pollen, it might just make your body more susceptible to coming down sick, by no fault of your own. Your body just can't quite handle fighting off these two things at the same time.

According to Ellen Foxman, the lead researcher on the study, these results, which have been published in the scientific journal Cell Reports, shed light on the "delicate balance between the body's different defense mechanisms," per ScienceDaily. Foxman said in a statement,

Your airway lining protects against viruses but also other harmful substances that enter airways. The airway does pretty well if it encounters one stressor at a time. But when there are two different stressors, there's a tradeoff. What we found is that when your airway is trying to deal with another stress type, it can adapt but the cost is susceptibility to rhinovirus infection.

So, if you find yourself with a persistent seasonal sniffle, you might want to ask yourself a few questions: Are you also suffering from allergies, perhaps? Do you smoke? (Yes, BTW, the green stuff counts when it comes to lung irritation, too.) Are you around someone who smokes a lot? Are you living in a polluted area? All of these things might be factors that could explain why you never seem to escape the common cold each time the season rolls back around.

I know it's kind of a bummer that these things are mostly out of your control, but hey, if you're really frustrated about it, it never hurts to pay a visit to your doctor to get more details.