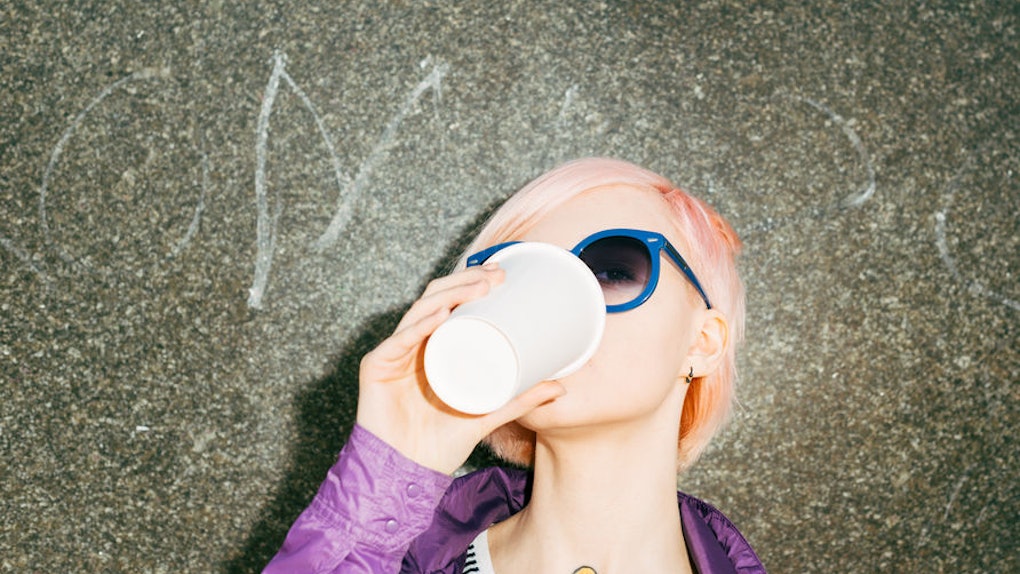 Why Do Hangovers Last So Long? Your Body Needs More Time To Recover Than You Realize

Sometimes when you party with alcohol, you end up partying harder than you meant to: One beer turns into two, your best friend hands you a shot, her SO buys another round, and before you know it, it’s 11 a.m. the next morning, and your head is pounding something fierce. You check the time, moaning and groaning because you’re pretty sure your last sip was around midnight at the latest, and if that’s the case, why are you still feeling it? The reason why hangovers last so long might surprise you, especially when you’ve established a foolproof hangover cure that brings your body (mostly) back to life. You indulge in an everything bagel with cream cheese and a large coffee for lunch (you slept through breakfast) — and once you’ve performed the ritual, depending on how much you drank the night before, you probably feel just peachy. But hangovers last a lot longer than you realize, and if you don’t nurse them responsibly, you could potentially be putting yourself in dangerous situations, without even being aware of it.

Personally, I learned pretty early on in college that alcohol and I are far from BFFs. One solo cup of my then-best friend’s signature screwdriver cocktail (aka a dainty splash of OJ and a ton of vodka) was more than enough for me to become lighter — read: clumsier — on my feet. I also quickly learned that hangovers are not fun, and that even if I tossed my cup early on in the night, my body would still be feeling that last sip of vodka until noon the next day. TBH, I’m kind of a baby when it comes to alcohol and hangovers, and if my insides aren’t feeling up to par, you can bet this girl’s going to be bedridden for the following 24 hours. Still, I know a lot of people who’ll pop an ibuprofen, down a bottle of water, and go on with their day as per usual — but new research says hangovers are nothing to toy with, because while the alcohol might technically be out of your system, the effects of it are lingering longer than you realize.

If you’ve been lucky enough to dodge a dreaded hangover, allow me to explain what a hangover is, exactly. Per Mayo Clinic’s definition, a hangover is a group of “unpleasant signs and symptoms that can develop after drinking too much alcohol.” And, by unpleasant, that means things like headaches, muscle aches, fatigue, nausea, trouble sleeping, sensitivity to light and sound, and irritability, among other, similarly yucky symptoms. I bet happy hour sounds super appealing right about now, huh? As if enduring these symptoms weren’t enough, the National Institute on Alcohol Abuse and Alcoholism wants you to know that not only will you endure the consequences of drinking come morning, but hangovers also tend to last for an entire 24 hours after the fact. And you know what that means, right? Bagels can’t cure everything. Bummer.

It's some appalling stuff, I know, but if you don’t believe me, believe science: Researchers from the University at Bath in the UK recently analyzed previous data that explored the effects alcohol can have on the body after a night of heavy drinking, BuzzFeed News reports. The findings, which have been published in the scientific journal Addiction, showed that even when someone has a blood alcohol content of zero, or almost zero, come morning, the impairments in attention, short- and long-term memory, coordination, and reaction time brought on by alcohol can take a toll on the body for a whopping 24 hours after the fact. In other words, even if everything feels copacetic after wolfing down a carbo-loaded brunch and taking an hours-long nap, your body’s likely still recuperating.

Now, you might be wondering, if your body’s blood alcohol content is so low after a good night’s sleep, what’s the big deal? And why isn’t your body functioning properly? It’s a valid question, and according to the study’s senior author Sally Adams, the answer lies in your body’s ability to metabolize the drink that got you drunk in the first place. See, certain enzymes in your body are supposed to break down the alcohol in your system into these things called toxic byproducts, Adams told BuzzFeed News.

“One of these metabolites is called acetaldehyde, and some neurological studies have shown early indications that acetaldehyde might mimic the effects of alcohol on the brain and subsequent cognition," she told the outlet. In other words, a chemical that's already naturally present in your body tends to mirror the behaviors of the alcohol you drank, long after said alcohol has been flushed out of your system. It’s kind of like how your annoying little sister or brother copies everything you do, and they think it’s funny, but it’s not, and instead of calling it quits after a few minutes, these suckers play the game for hours.

Not to mention, alcohol itself does some serious damage to your insides. Drinking more than your body can handle — which, BTW, totally depends on your individual body — can lead to dehydration, trouble sleeping, high blood pressure, mood swings, and more. So while you might feel totally fine to hop in the car and meet your squad for Sunday brunch, clearly it's in your best interest to sit this one out and chill at home. After all, the last thing your body needs right now is bottomless mimosas.

More like this
The TikTok Recipe You Should Try, Based On Your Zodiac Sign
By Chelsea Jackson
These 40 Clever Vaccine Selfie Instagram Captions Deserve A Shot On Your Feed
By Rachel Chapman
Your Mars Sign Meaning Reveals A Lot About Your Sexual Needs, So Take Notes
By Roya Backlund
Stay up to date