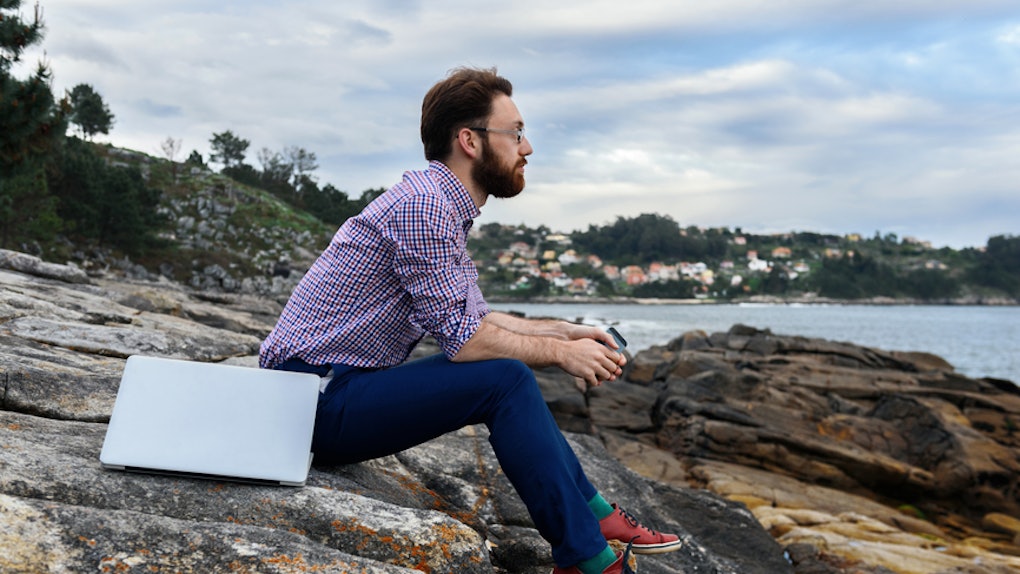 Why Do Guys Not Open Up? Here, 8 Men (Finally!) Reveal Why That Is

If the new Queer Eye has taught me anything (and TBH, it has taught me everything), it's that openness and vulnerability are the trademarks of a good, successful man. And yet, in my own (somewhat limited) experience with guys, I've found men to be the opposite of open — whether they were intentionally being shady or just, unable to express themselves in a productive, honest fashion. So, why do guys not open up? At least, not until a group of five fabulous gay men show up to make them over head-to-toe.

I decided to go straight to the source and asked a bunch of guys, point blank, why they think they have a hard time sharing their feelings. Interestingly, many told me that they don't have a hard time expressing themselves at all (how strange that I should ask).

My first conclusion? Men are liars.

"But Genevieve!" you might cry. "What if these guys are telling the truth? What if men really are open about their feelings, and you just haven't been willing to listen?"

Fair point. And upon further reflection, I realized that I actually do know a handful of men who are fairly open (albeit blunt) about how they're feeling. Maybe the greatest challenge here isn't always that men are hesitant or afraid to share their emotions, it's that I've been too afraid to ask what those emotions are.

Personally, I have a tendency to read into other people's actions and words, instead of just asking someone how or what they're feeling outright. And yeah, oftentimes when I have asked what was going on, guys have given vague and ambiguous replies. But I think a lot of the moments in which I've gotten actual, honest feedback — cough, that time my ex-boyfriend told me he had forced himself to love me, cough — had scared me away from asking for it.

With that in mind, I asked eight guys about how they feel about, well, sharing their feelings. Here's what they had to say.

This guy worries about getting judged.

I think that most guys are too concerned about what the other person might think about them to really open up... Like, for example, if you tell someone on a date that you are really emotional and you cry watching a sappy movie, that person might find it either cute or completely judge you! So we hide our feelings to avoided being judged too soon.

Just because we don't sit around talking about our feelings and gossiping doesn't mean we don't open up. I think I've always been pretty open with the girls that I've dated.

This guy says men avoid opening up because they're actually pretty sensitive.

I think guys are bad at sharing our feelings because we're bad at handling rejection. Basically, boys are more sensitive than people realize, so they prefer not to open up in the first place. They need to confirm a lot of different things before they'll open up their heart.

This guy says it all comes down to that "man up" mentality society drills into boys' heads.

I think it's a societal thing. Most of our lives, we're encouraged not to show our feelings, so we struggle to do so when we're older.

This guy isn't quite sure.

I have no idea. TBH, I'm pretty open, so I don't really know. I can't speak on behalf of the rest of the male species, as I don't know what goes through their minds.

I mean, every guy is different. But I think I'm always pretty open about how I feel.

This guy equates opening up to the "ultimate show of love."

We're like women, really. We don't want to be made a fool of, and when we do open up, that's when you know we really care about you and feel comfortable with you. For me, opening up to someone is the ultimate show of love.

And even my dad says that men have a tough time with vulnerability.

After snagging that last quote from my very own father, I started to think that it's not the actual process of communication that frightens or frustrates men — it's the possibility of facing judgment or criticism for doing so.

Whether they'd like to admit it or not, men need permission to be vulnerable — with friends, with coaches, with bosses, and especially with the men or women they're dating. So, maybe we owe it to the guys in our lives to grant them that permission to be open and vulnerable and real? It might be the secret to cracking the enigmatic code that is ~men~: Just saying hey, you can tell me how you feel.