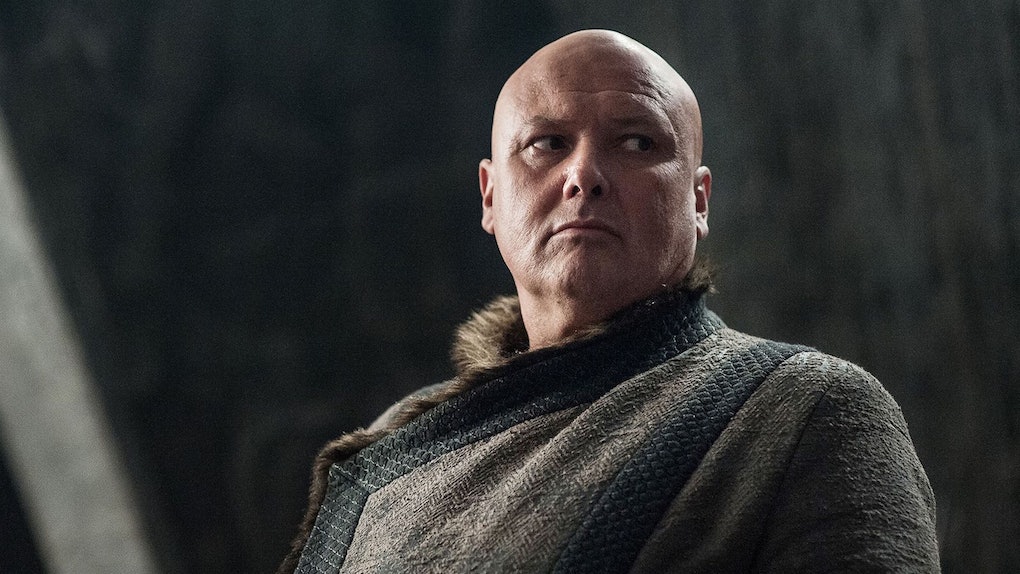 Why Did Varys Take Off His Ring? This 'Game Of Thrones' Theory Explains What Went Down

The penultimate episode of Game of Thrones raised a lot of questions, and one of its most perplexing scenes came at the very beginning. Varys has been known for his trickery throughout the run of Game of Thrones, and it looks like he may have had one final plan in the works. Spoiler alert: This post contains spoilers from Game of Thrones Season 8 Episode 5, "The Bells." Before his execution, Varys is seen writing some letters, talking with one of his "little birds," and then suspiciously taking off his ring. So, why did Varys take off his ring? It was a moment that left a lot of fans scratching their heads, but a new theory offers up a pretty solid explanation for Varys' final action.

To fully discuss this theory about the ring, the first thing that we need to address is Varys' conversation with his "little bird," Martha. At the beginning of the episode, Varys tries to convince Jon Snow to live up to his destiny as the true heir of the Iron Throne, but Jon rebuffs him, asserting that Daenerys will always be his queen. Varys will soon get sentenced to death by Daenerys for his allegiance to Jon, but before that, it appears that he is cooking up one final plan to try to propel Jon to the Iron Throne. A little girl named Martha tells Varys that a mysterious "she" is refusing to eat, and Varys replies that they will try again at supper. As many fans have pointed out, the exchange seems to confirm that Varys was trying to poison Daenerys.

So, what if this whole poisoning plot has something to do with why Varys mysterious took off his ring right before he was being summoned for his execution?

Fans are theorizing that the jewels in Varys' ring contained the poison he was using on Daenerys, and he left the ring behind so that his "little bird" Martha could potentially finish the job.

And the theory actually is not as far-fetched as it may initially sound. After all, we do know that poisoned jewelry exists in the world of Game of Thrones — Olenna Tyrell famously used a jewel from Sansa's necklace to poison and kill Joffrey Lannister.

It looks like Varys may have been planning a similar death for Daenerys Targaryen, except it sounds like Daenerys was on to him and refused to eat any of the meals that he had poisoned. But Varys leaving his poison-filled ring behind does leave the possibility open that he could still have a hand in Dany's downfall in the end. If Martha did, in fact, know that Varys was using his ring to poison Dany, then she will likely take the ring from his table and continue the poisoning plan, which could wind up being the way that Daenerys is killed in the series finale.

Of course, it seems more likely that a main character like Jon Snow, Arya Stark, Sansa Stark, or Tyrion Lannister would be the one to kill Daenerys in the end, but this theory could definitely still prove true, and it would cement Varys as the ultimate trickster within the Game of Thrones universe.