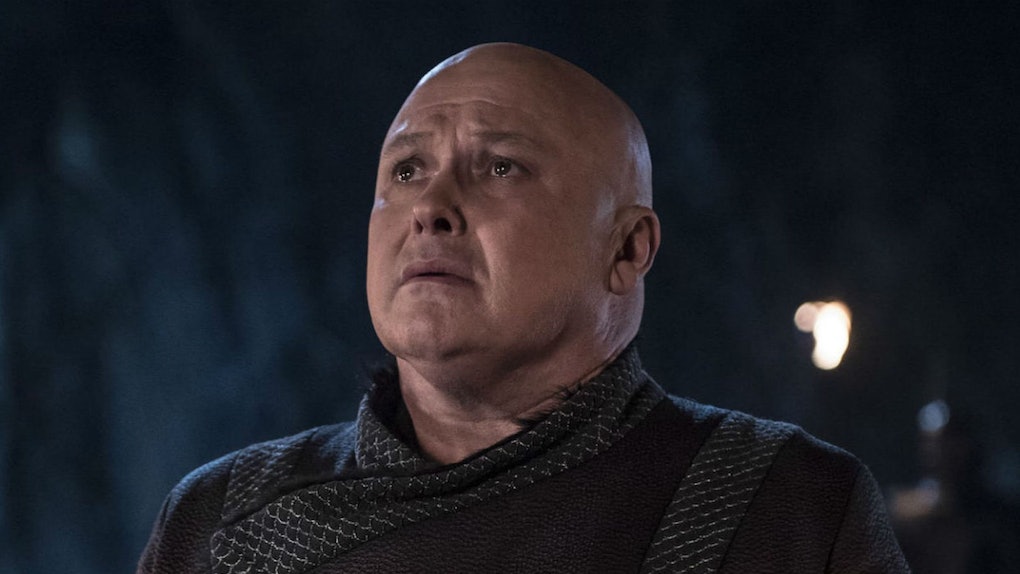 Was Varys Poisoning Daenerys? 'Game Of Thrones' Fans Think He Had A Much Bigger Plan

Lord Varys has long been on of the trickiest characters in Game of Thrones, and although he was only in Sunday night's latest episode for a few moments, he may have actually accomplished a whole lot more than viewers probably expected. Spoiler alert: This post contains spoilers for Game of Thrones Season 8 Episode 5, "The Bells." Varys may have met his fiery end at the beginning of this week's new episode, but the brief scene prior to his death has many fans wondering if Varys was poisoning Daenerys. The Master of Whispers may have secretly been working towards Dany's death all along.

The new episode began with a scene that may have felt slightly confusing to viewers. We see Varys writing letters at his desk as a young girl named Martha informs him that a mysterious someone has not been eating, and that she is being watched by guards. As fans on Reddit pointed out, the exchange seems to clearly suggest that Varys has been poisoning Daenerys' food: The mysterious non-eater is a "she," Martha works in the kitchen, Varys assures her they will try again at supper, and he also tells her that great risk yields great reward. It is unclear how long Varys has been trying to poison Daenerys, but it seems likely that he probably began slipping poison into her food after learning that Jon Snow is the true heir to the throne at the end of last week's episode.

Varys has been intent on getting Jon Snow to take the Iron Throne since learning the secret, even urging him personally, but Jon adamantly rebuked the idea, declaring Daenerys will always be his queen. Without Jon's cooperation, it looked like Varys began taking measures into his own hands. Not only did he begin to poison Daenerys, but a quick shot of the letters Varys was writing at the beginning of the episode reveals that he was spreading the news about Jon's true Targaryen identity to important people throughout Westeros.

There is a chance that Varys managed to sneak Daenerys a bit of poison, which could possibly fester and kill her in the finale or may have helped to drive her mad in her King's Landing attack, but it seems much more likely that Varys' poison attempt just failed. However, these letters that Varys was sending out may work just as effectively in sealing Daenerys' fate.

Although it is not made clear who Varys is addressing these letters to in the episode, superfans have surmised that he is likely sending them to the rulers of the seven kingdoms, particularly to the leaders of Dorne, the Vale, Riverrun, and Storm's End (the latter of which is Gendry Baratheon). These kingdoms are already not especially loyal to Daenerys Targaryen and would presumably much rather see Jon Snow sit in the Iron Throne, so getting the news about Jon being the rightful heir should come as a welcome surprise to them, encouraging them to stand up to Daenerys and support Jon. It turns out, Varys may have bested Daenerys by doing what he has always done best: spreading secrets.