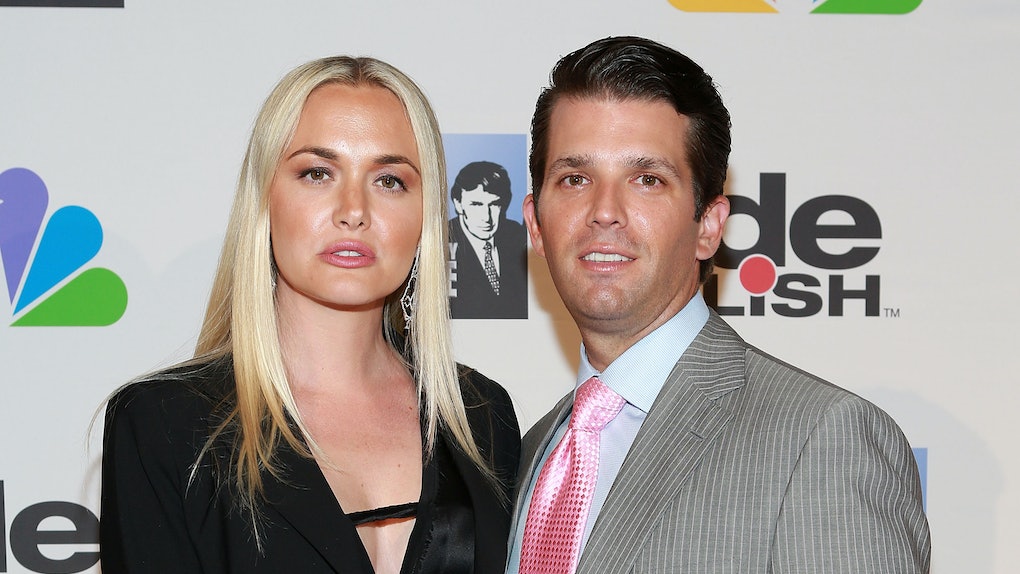 Why Are Donald Trump Jr. & Vanessa Trump Getting Divorced? It Might Have Been Money

By now you have probably heard the news that Vanessa Trump has found a way to dig herself out of the blinding presidential spotlight. On March 15, news broke that Vanessa had filed for divorce from the eldest Trump son, Donald Trump Jr. Of course everyone can probably think of a few of their own hypothetical reasons for the split, but, really, why are Donald Trump Jr. and Vanessa Trump getting divorced? It might have to do with a tight-fisted Trump Jr., according to a new report.

Multiple sources have come forward claiming that Trump Jr. is cheap and not exactly generous when it comes to sharing is exuberant wealth with his wife, according to Page Six. According to the publication, Trump Jr. treats Vanessa like a "second-class citizen." Elite Daily reached out to representatives of Trump Jr. for comment, but did not hear back by the time of publication.

Vanessa reportedly does not lead the glamorous life the public might expect from someone who is a part of the Trump family. One of the sources, a friend of Vanessa's, told Page Six that Trump Jr. is a tight-wad when it comes to his wife. The source reportedly said,

He gives her very little help and has been keeping her on a tight budget. She doesn’t live a lavish life and can very rarely pick up a check at dinner.

Another source claimed that because of how little Trump. Jr shares with Vanessa, at time she has had to rely on her mother for "financial help," according to Page Six. The source reportedly said,

Don Jr. was never generous with money. Vanessa has had to rely on her mother for financial help for her personal needs.

For what it's worth, according to Vanessa's spokesperson, Trump Jr. never mistreated his wife in any such manner. The spokesperson told Page Six that all of the claims are false and that Vanessa never had to rely on her family for help. She said,

All of these claims are simply not true. Don and Vanessa have tremendous respect for each other and always have. The notion that she has had to rely on her family for assistance is absolutely false and utterly ridiculous.

Let me tell you, I am absolutely shocked at the suggestion that a member of the Trump family is cheap. Shocked, I say.

But this report is kind of disturbing for other reasons, though. This scenario feels like it was in every episode of Mad Men even though it probably wasn't (but could have been) — the wife takes care of the house and children, while the husband brings home the bacon and doles out a few bucks so his wife has some cash for groceries and such.

I mean, why wouldn't Vanessa have equal access to the funds? She was his wife.

Whether the divorce has anything to do with money is still unclear, but apparently the relationship had been doomed for a while.

Trump Jr. and Vanessa were having problems even before they got married in 2005, according to Page Six. Sources also said that Vanessa had been planing to divorce Trump Jr. before President Donald Trump's presidency began. A source said,

They were having problems before they even got married. People were telling her not to marry him before the wedding. She was interviewing divorce lawyers before [Trump’s presidency]. No one thought he’d win. He won and she decided to stay until his term is over. But she just couldn’t stand it anymore.

In a March 15 statement given to Elite Daily, the couple confirms they are divorcing and shares that they still have respect for each other. The statement reads,

Truthfully, the public may never know the exact reason for Trump Jr. and Vanessa's divorce.