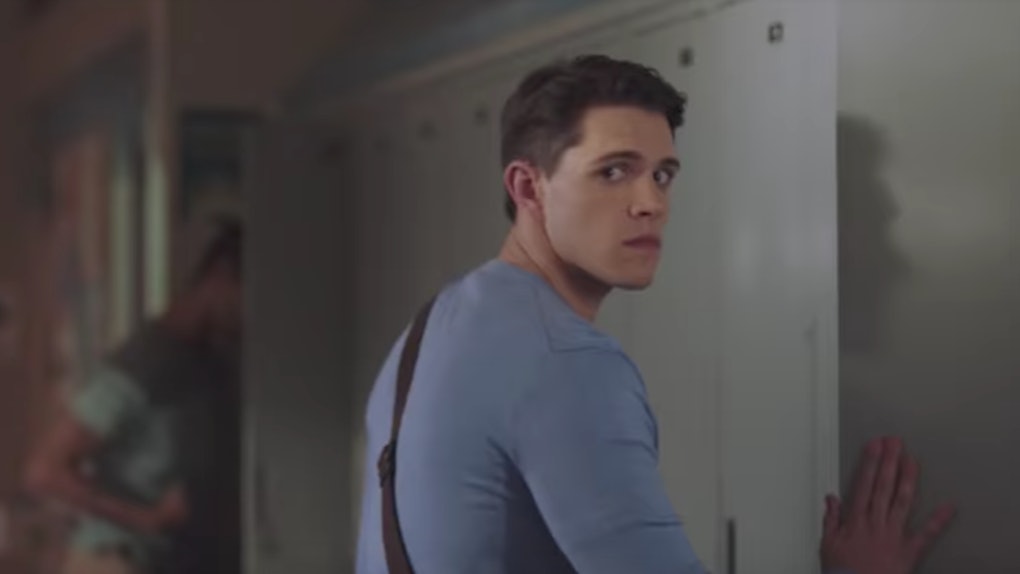 Who's The Man In The Baseball Hat On 'Riverdale'? We've Got Questions

There's never a dull moment in Riverdale and nobody is immune to fear, chaos, and the occasional terrifying moment. This week we saw Jughead deal with his new school and its inevitable gangs, Archie wage war on The Black Hood, and Kevin engage in some risky actions that involved a potential brush with immense danger. How are there more menacing characters roaming this already packed zip code? Who's the man in the baseball hat on Riverdale? We're wondering if we'll see him again.

As Kevin finds himself "night jogging" AKA cruising Fox Forest on a dark evening, viewers were faced with a shocking encounter that honestly made us question (for a split second) if the show was going to actually hurt Kevin in a major way. Is that — gasp! — a knife that just went into his stomach? Not exactly. When Kevin rolls up to a car and a man in a black baseball hat asks him to get in, he considers it and for a brief moment we see a flash of him entering in the vehicle, only to be stabbed by said driver. Yes, there's a killer on the loose in Riverdale and the surrounding towns, but this was somewhat of a false alarm and only a "what could have been" scenario. Or was it?

We're not saying Black Hat = Black Hood. But the cap did cover the man in question's eyes, which we know now are the Hood's most defining feature. Moose and Midge described them as scary AF and pretty unforgettable. But Kevin's (and Betty's, of course) fears are valid, despite the conflict that arose between them regarding Kevin's behavior. Riverdale is practically full of red flags that can't be ignored. Murder, mysteries, and mayhem are the town staples. "Get in the damn car, you little tease!" screams the man to Kevin. Even if this guy didn't directly hurt him, getting into a car with a stranger isn't the greatest idea anyway.

But Betty doesn't get what Kevin is going through when she tells him she doesn't approve of his trips to the forest. "You act like we've got the same set of options," he explains to her. "This is what I've got, Betty. Me. These woods. So please don't come here and tell me it's disgusting. If you can't accept whatever I do then we're not really friends." Oh, no. We understand that Kevin wants Betty to know that their experiences are very different. He's struggling for a reason and he should definitely be honest with her so she can begin to empathize, but it's dangerous out there, Kev. We hear Betty's voice as Kevin imagines he's being stabbed by the mysterious man. Maybe her words meant more to him than he realized, or more than he could admit at the time. We sure hope B and K can repair their friendship because the good people of Riverdale need each other. There's danger lurking at every corner and if you don't have your friends then the cold world outside is going to feel a whole lot colder. You hear that, everyone on this show?

All the insiders who said Riverdale was going to be darker this season weren't playing around. While last season had an eerie whodunnit to ponder and some seriously strange happenings, this time around has us questioning everything. Friendships are being torn apart, there are nearly-fatal incidents weekly, and the town is on the brink of something beyond sinister. Who's next? Showrunner Roberto Aguirre-Sacasa revealed that the next few episodes are going to be big for a one Ms. Betty Cooper. “I would say by episode 4 and 5, Betty is absolutely in the heart of darkness. We’re putting her through the fires like never before. I can’t say too much because there’s a couple of big twists, but Betty is absolutely at the heart of the darkest story we’re telling this season.” Yikes. What now?! Stay tuned and be safe out there, kiddos.

More like this
In 'Riverdale' Season 5, Toni Topaz Is The Black Superwoman Without A Cape
By Erika Hardison
Bella Thorne's "Phantom" Reveals The Lessons She's Learned About Healthy Relationships — EXCLUSIVE
By Brandy Robidoux
Here's How To Watch 'Promising Young Woman' For Free If You're A College Student
By Ani Bundel
Stay up to date