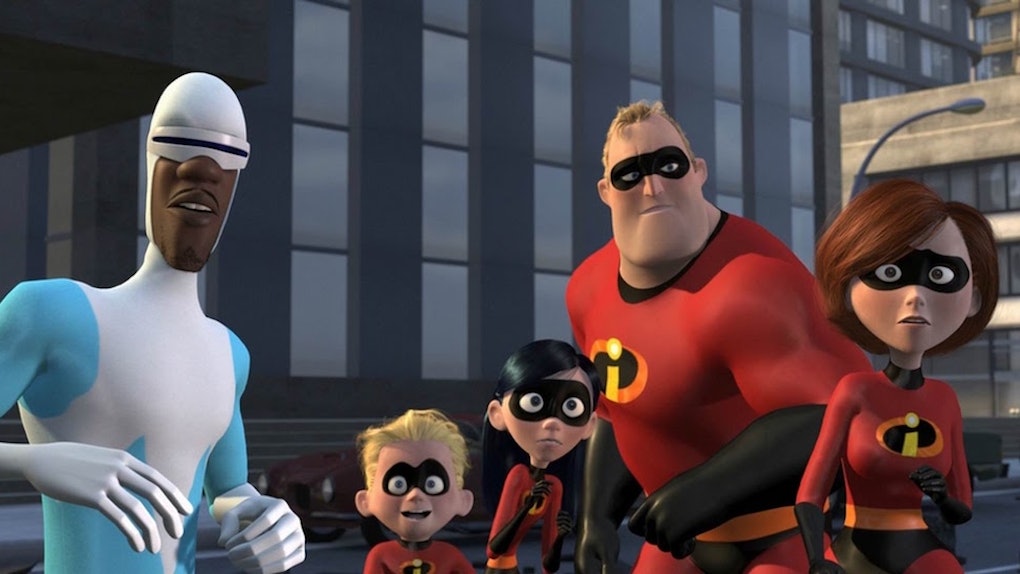 Who Is Screenslaver? Pixar Finally Revealed The Supervillain From 'Incredibles 2'

We are so close to finally getting back into action with the Parr family in Incredibles 2, and now Pixar is stealthily releasing some pretty major details about the highly anticipated superhero sequel. The latest bit of info might actually be a pretty big new character reveal. A new poster seems to feature the supervillain that the Incredibles will be facing off against. So who is Screenslaver in Incredibles 2? Some fans are already piecing together a lot of information about this mysterious new bad guy.

Pixar has been dropping details about Incredibles 2 little by little for the past several months, but notably, it still had yet to show us the new supervillain that the Incredibles would have to square off against. I mean, come on — it's a superhero movie, so where is the supervillain? Well, luckily, diehard Incredibles fans have been closely inspecting every piece of promotional material and merchandise connected to the upcoming movie, and one masked man has popped up enough times to seemingly confirm that he is going to play a major role in Incredibles 2... and most likely not a very heroic one.

A newly released poster for Incredibles 2 gives fans a peek at the movie's villain, as a man clad in black with glowing blue eyes looms over the superpowered family.

You can see the mysterious antagonist pop up in a few other promotional materials related to the new movie, including a large painting in the Pixar offices that the studio's Instagram account posted:

But the most concrete information we get about the new character comes from a newly released LEGO set tied to Incredibles 2. The set called Elastigirl's Rooftop Pursuit is visible on the Toys R Us website, and it includes a figurine of that bright-eyed new supervillain. Oh, and the product description gives us his name as well: Screenslaver.

The LEGO set's product description also pretty clearly confirms that Screenslaver will be a villain (as if that wasn't already obvious), and even provides a hint about what his powers will probably be:

Look, up on the rooftop! Screenslaver is trying to hack into the satellite! Race with Elastigirl on her Elasticycle to the building, but watch out for the spinning turbine. Climb up to the rooftop, then swing from the billboard and strrreeetch out to grab onto Screenslaver's helicopter. Be careful; don't look at the spinning hypno-propeller! Can you keep him from getting away?

It is not like the name Screenslaver is all that subtle, but that description definitely makes it clear that the new villain will have hypnotic powers. Given his name and the fact that he is hacking a satellite in the LEGO set, it also sounds like he will be using television screens to amplify his mind-controlling powers.

And guess what, guys? There's another major reveal about Screenslaver that superfans have already deduced online. This one really does get into the SPOILER ALERT category, though, since it involves what will likely be a big twist in the movie, so don't read on if you want to go into Incredibles 2 totally free of potential spoilers.

Anyway, all of these little appearances Screenslaver appearance seems to confirm the villain's secret identity. It all seems to point to the new character of Winston Deaver (voiced by Bob Odenkirk), the boss of a telecommunications company (easy access to screens: check) who hires Elastigirl to help boost the approval rating of superheroes in the public eye. One Incredibles superfan made a convincing case for Screenslaver's true identity in a YouTube video, if you want a more in-depth analysis:

Of course, there is still a lot more for us to learn about Screenslaver, and fans can look forward to seeing the new big bad in action when Incredibles 2 hits theaters on June 15.

More like this
Here's How To Stream 'Nomadland' So You Can Finally Get The Hype
By Rachel Varina
10 Quotes From Netflix's 'Enola Holmes' That Are So Freaking Relevant
By Rachel Varina
What's Coming To Netflix In May 2021? Lots Of Action & Drama
By Ani Bundel
Stay up to date