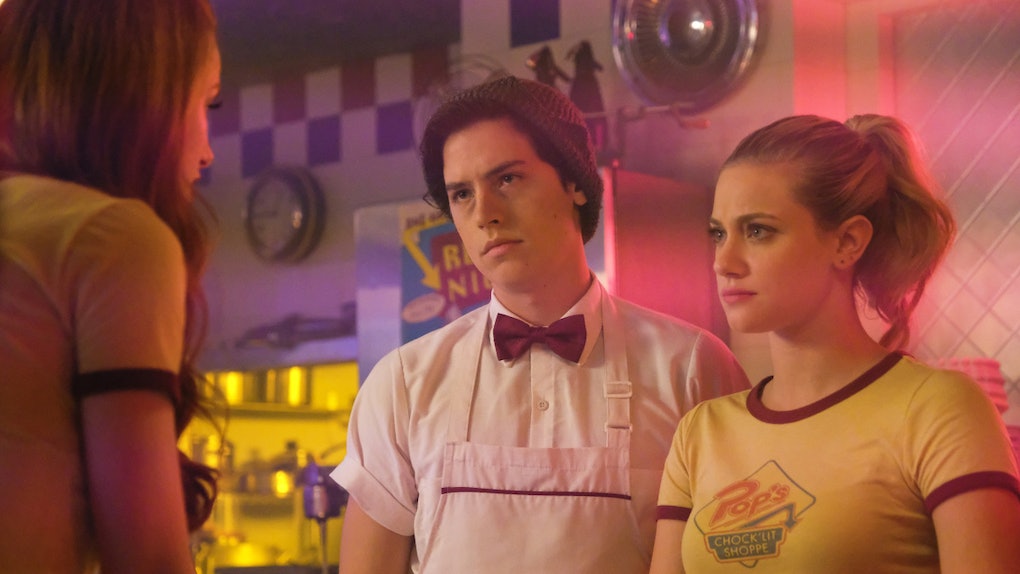 Who Is Penny Peabody On 'Riverdale'? The New Character Spells Trouble For Jughead

As Riverdale rolls on into the heart of the second season, things are beginning to look pretty dire for Jughead's father, FP Jones. The man is facing 20 years in jail, as Jughead discovers to his horror, and the court appointed lawyer (who Jug has a very low opinion of) thinks he should simply take the deal without a fight, even though we all know he's not guilty. Jughead gets so desperate he considers breaking his father out of jail. Instead, he gets sent to Penny Peabody. But who Is Penny Peabody On Riverdale? And why might this be as terrible idea as breaking his father out of the slammer?

Miss Peabody, or Penny, as I suppose we should call her, is a lawyer, who wasn't so court appointed, though she's not exactly taking Jughead's father's case either. Instead, she sits in the back of the Serpent's tattoo shop, in a tiny closet of an office, dispensing "legal advice."

So how did she become a lawyer exactly, and what gives her the right to dispense advice? She's part of the Southside Serpents, has been one since she was a teenager. According to her, the Serpents actually paid for her to go to college and then on to law school.

As Jughead notes this is useful for everyone. She got an education, and considering how many times the gang is outside the law, they have one "on their side." She simply smiles in return. Clearly, her opinion is that they might do this for everyone.

So what is this "great and powerful" legal advice she dispenses? Try not to howl with laughter. She may think the plea deal is crap, but her advice, despite Jughead's desperation to believe in it, is totally bunk too. "Have the victims forgive FP in open court in front of the judge."

OK, look, let's review. Right now there is a huge problem. Jason Blossom is dead. He was killed by his own father. But no one in the Blossom family really wants this to come out, not Mom, and certainly not Cheryl, who is using her knowledge to get everything she wants.

FP is supposed to be taking the fall for Jason's death, at least, as far as the Blossom family is concerned. Do we really think they might be willing to go into open court and forgive the man who could blow the case wide open if he goes free? As Cheryl says, he's the last loose end that needs tying up.

It takes Betty to force Cheryl into court to do "the right thing," by threatening to release the tape of Mr. Blossom shooting Jason. But here's the rub. This was never an assurance that FP would automatically get out with time served, just because Cheryl says she forgives him and asks the court to be kind. That was conjecture, at best, on the part of Miss Peabody.

FP and Jughead are lucky. Cheryl is quick on her feet and quicker on the witness stand to come up with "extenuating circumstances" that should change the course of the trial, without admitting the truth of the matter. It's enough to put the trial on hold, for now.

What's worse? All of this advice is putting Jughead in a deep hole. No, not monetarily. This is Godfather level stuff. Jughead now owes this lady one, for advice that might not even work. And she says she's call it in... when she needs it. Even FP is terrified.

And if we've learned anything from this show, that moment of "calling it in" is going to be at the worst possible moment. This can't be good for Jughead going forward. The question is how long until he regrets it?