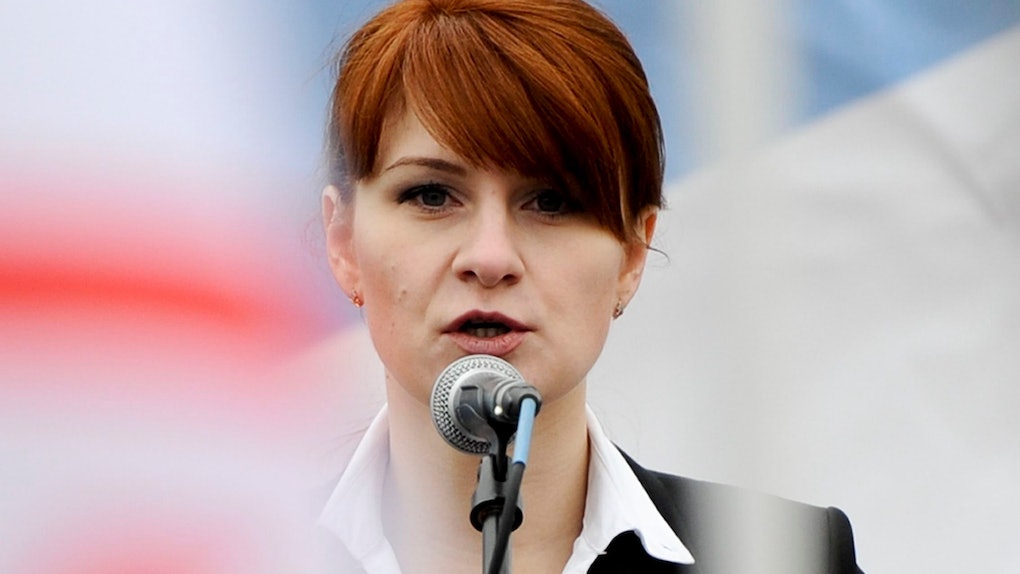 Who Is Maria Butina? The Accused Russian Spy Is Reportedly Taking A Plea Deal

Already this week, there are numerous developments underway for the investigations into possible collusion between Russian and the 2016 presidential campaign of Donald Trump. With plea deals and sentencing memos galore, understandably, the internet is in a flurry this week to stay up to date on the latest. As of Monday, Dec. 10, NPR reported that Maria Butina had reached a plea deal with federal prosecutors. If you're asking yourself, Wait, who is Maria Butina again? you're certainly not alone. Here's a quick refresher and rundown on the current situation.

Butina, the 30-year-old Russian national who was accused of spying as part of an alleged campaign to influence American conservatives, is scheduled to appear in court on Wednesday, Dec. 12, where she will reportedly change to a guilty plea. First indicted in July 2018, she'd initially pleaded not guilty. She has reportedly agreed to plead guilty at Wednesday's hearing to one count of conspiracy to act as an agent of Russia and failing to disclose that status. Elite Daily's requests for comment to Butina's attorney regarding the case and plea were not returned at time of publication. The U.S. Attorney’s Office for the District of Columbia (USAO-DC) declined to comment on the case to Elite Daily.

The case is being brought by the USAO-DC under the Justice Department. Reports on Monday stated that Butina has agreed to cooperate with prosecutors, including testifying to a grand jury if asked, per NPR. It's not immediately clear what more the hearing Wednesday will reveal to the public, but with a potential guilty plea from Butina, some more pieces of the Russia-Trump puzzle may fall into place.

Butina's efforts to make friends with the NRA date back to the early 2010s, when she allegedly began working with Russian banking official Aleksandr Torshin to establish a gun-rights group akin to the NRA in Russia, called the "Right to Bear Arms." Over the years, the two reportedly went on to establish key connections with high-profile NRA contacts, including hosting a delegation of them in Russia in December 2015. She was also famously the first person to ask then-candidate Donald Trump about his position on Russian sanctions back at a conference in 2015. The Times notes that prosecutors' interest in Butina may come from an ongoing look at Torshin, and that she may be able to tell investigators about the extent of Torshin's work to allegedly influence American politics.

The connection between Butina and the NRA might have major implications. In 2016, the NRA spent $30 million for the Trump campaign, dwarfing what it had spent on campaigns in previous elections, per NBC News. Reports earlier this year showed that Russian nationals had appeared to donate to the gun lobby since 2015. Elite Daily reached out to the NRA for comment on Butina's involvement with the organization, but did not immediately hear back.

The Russia investigation appears to be heating up with a series of developments in the last couple of weeks. A sentencing memo for former Trump national security adviser Michael Flynn was released on Dec. 4, and Trump's former personal attorney Michael Cohen pleaded guilty on Nov. 29; this week, in addition to Butina's hearing, a hearing for former Trump campaign chairman Paul Manafort was scheduled for Tuesday, and a hearing for Cohen was also scheduled for Wednesday.

Russian President Vladimir Putin on Tuesday said he was not familiar with Butina. "I asked all the heads of our intelligence services what is going on. Nobody knows anything about her," Putin reportedly told Reuters.

NPR reports that Butina is being held in solitary confinement in Virginia, and has been detained since her indictment this summer. She faces of maximum sentence of five years in U.S. prison. As for what her plea agreement and cooperation might mean for her legal fate personally, that remains to be seen.