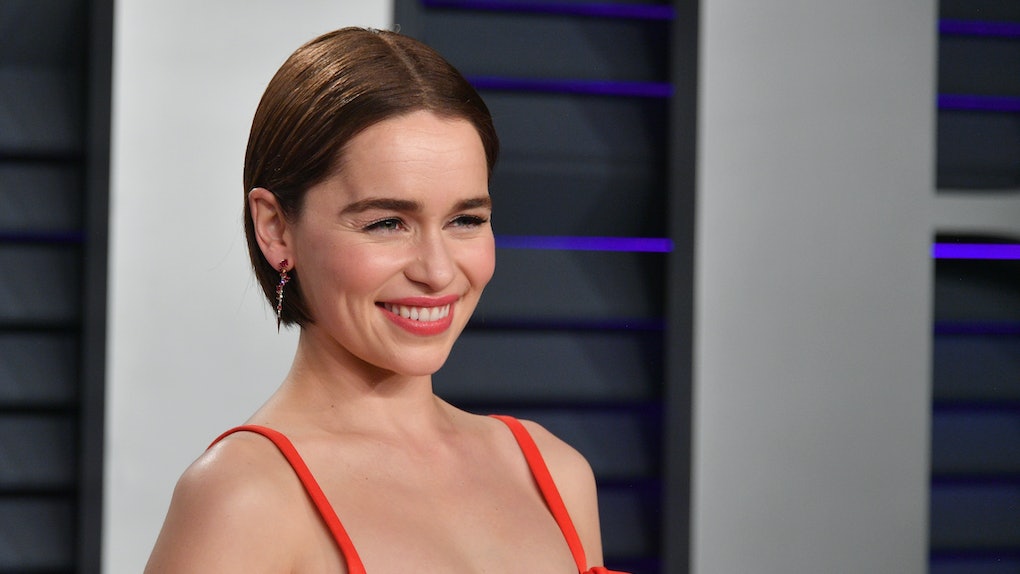 Who Is Emilia Clarke Dating? The ‘Game Of Thrones’ Star’s Relationship Status Is Unclear

Friends, the time is almost upon us. Winter is coming (even though it's actually almost spring, but whatever), and with it, the final season of Game Of Thrones. The hit HBO series closely following the books of the same name has pretty much put most of the cast involved on the map, including one Emilia Clarke. That being said, with all the fame surrounding the Mother of Dragons, it's easy to wonder... who is Emilia Clarke dating? Well, the answer is a little unclear, but it seems like it's a currently complicated. (And no, sorry Dany/Drogo shippers — she's not dating Jason Momoa. He's married to Lisa Bonet and they are beautiful together. thank u, next.)

Previously, Clarke has reportedly been linked to director Charlie McDowell, as the two have shared some subtle social media nods to each other over the past several months. However, as the sleuths over at Cosmopolitan have noted, it seems as if their rumored relationship might have come to an end, as the Instagram likes and posts have started to steadily decline. However, Clarke and McDowell never verbally confirmed their relationship, so clearly these two aren't super into sharing too much personal information, anyway. All that aside, the rumored couple might have actually called it quits weeks ago.

Elite Daily has reached out to Clarke's representative on these reports but did not hear back by the time of publication.

Of course, while Clarke never really posted a super lovey-dovey photo to Instagram with McDowell, there was one birthday photo that had fans in a tizzy. Alongside a photo of Clarke's shadow kissing another shadow in the sand, the actress wrote, "Well that was a birthday I won’t be forgetting in a while," along with a heart emoji. She didn't tag anyone in the post, but, Harper's Bazaar notes that McDowell himself reportedly posted the same image to his Instagram the following day, although the director has since taken the post down. According to Harper's Bazaar, McDowell captioned the photo with a simple, "Happy birthday, E," and a heart emoji as well. Hello!

However, the last photographic evidence of a possible relationship either one of them shared was when Clarke posted a photo of herself running on the beach, and gave McDowell photo credits. This was on Dec. 31, 2018, so not too long ago!

But since then, the 32-year-old hasn't included McDowell in anything social-media related, and as Cosmopolitan reported, McDowell has reportedly unfollowed Clarke on Instagram. All signs would point to a breakup, although it's important to note that they never confirmed a relationship to begin with, so perhaps this was but a fling.

Whatever the case, it appears as though Daenerys Targaryen herself is single, although there's no telling if she's ready to mingle just yet. The London native has the world at her fingertips, and I'm pretty sure every living, breathing human being on planet earth right now would want to date her. She's the Mother of Dragons, after all! But Clarke seems to be doing just fine on her own, and truly is living her best life.