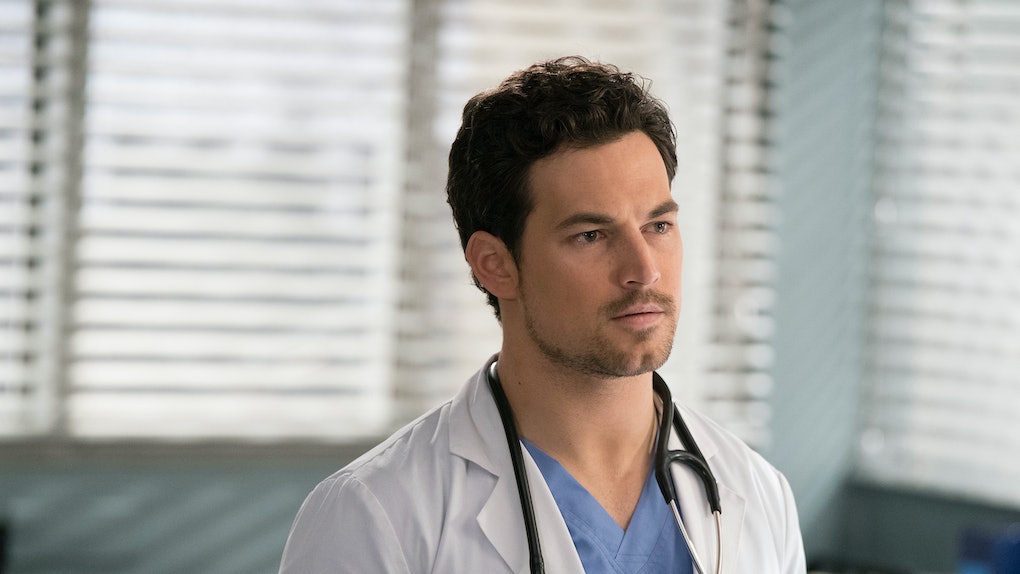 Who Is DeLuca's Dad? 'Grey's Anatomy' Fans Are Learning More & More About Him

Complicated families are practically a necessity among the Grey's Anatomy doctors, so it feels right that the medical drama's record-breaking episode on Feb. 28 featured plenty of those bonds. Alex's mom made a surprise visit to Seattle while Owen and Amelia struggled with their empty nest after Betty and Leo left to stay with her parents. After keeping their new relationship under the radar, Meredith and DeLuca's night also took an unexpected turn when his father crashed their intimate evening plans. Who is DeLuca's dad? His arrival promises more insight into the DeLuca siblings' childhood.

Feb. 28's "We Didn't Start the Fire" marked Grey's Anatomy officially surpassing E.R. as TV's longest-running medical drama. Although the episode promo featured some of the series' most memorable lines, the story didn't emulate Meredith's nostalgic Day of the Dead visions from a few months ago. Instead, the majority of the Grey Sloan doctors hung up their scrubs to gather at a party celebrating Catherine's (Debbie Allen) successful surgery.

Despite Jackson (Jesse Williams) wanting the night to run smoothly for his mom, most of the gang weren't exactly in a partying mood. While others dealt with parents and a lack of kids, Teddy's (Kim Raver) affection toward Koracick (Greg Germann) didn't sit well with Owen (Kevin McKidd). As Catherine avoided the party at all costs, Maggie (Kelly McCreary) stressed about her enemy Kiki publicizing her fluffy perception of the surgery Maggie performed on her.

In comparison, Meredith (Ellen Pompeo) and DeLuca (Giacomo Gianniotti) were actually having a great night. Although she told Alex (Justin Chambers) about her relationship, Meredith and DeLuca stayed mum about themselves at the party, finding a cozy nook to spend time together. Meredith's concern with appearing normal and not revealing anything about her and DeLuca inadvertently caused the fire that put the party to a halt. This sent the two to DeLuca's place for more privacy.

Earlier in the night, DeLuca had ignored a phone call from his sister Carina (Stefania Spampinato). This proved to be a mistake when Carina arrived at his home with their father (Lorenzo Caccialanza) in tow. DeLuca's flustered reaction to the surprise matched what fans already knew about his complex relationship with his dad.

As he told Meredith when they were stuck in a hospital elevator together, DeLuca lived with his and Carina's mom in the United States while Carina grew up with their father in Italy. DeLuca Sr. was a famous surgeon in Italy, hitting scandal when his mental illness caused him to operate in a manic state on seven patients. Despite four patients dying, DeLuca Sr.'s finances and personal connections allowed him to emerge from the troubles unscathed. The younger DeLuca didn't approve of his dad's finagling, but because he treated his son so well, accepting him as a whole was still difficult for Andrew.

Given Carina's attempts to warn DeLuca about the visit, it's clear that the clan's reunion will have its fair share of tension. With Meredith and DeLuca's relationship still a big secret, we'll have to wait and see whether or not the arrival of his dad speeds things along. Meredith spoke her piece with her father earlier this season, so if her relationship with DeLuca is meant to bloom, maybe he's overdue for a honest chat with his own dad.