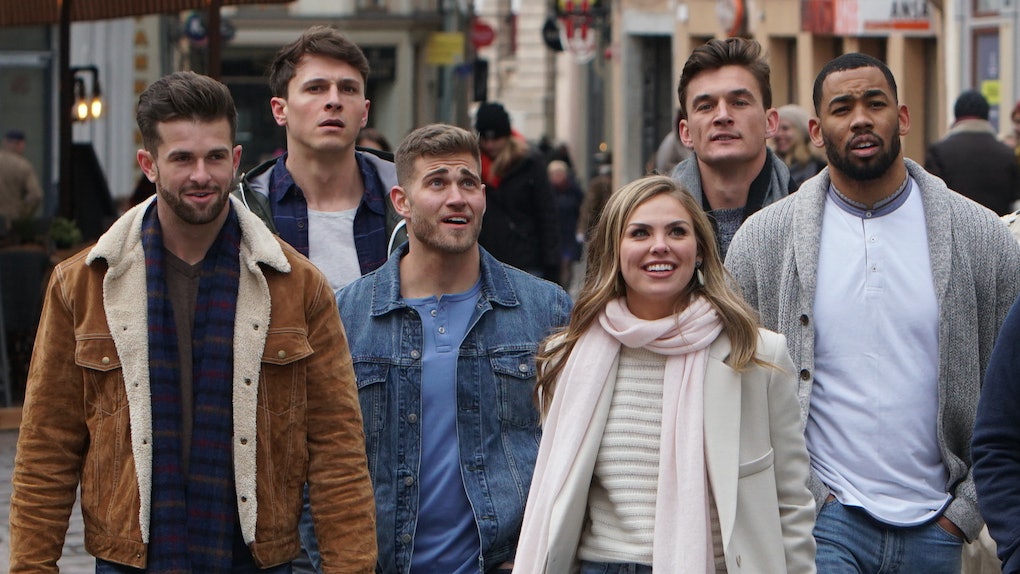 Who Goes Home On 'The Bachelorette' Week 8? Here's Who Won't Be Getting Hometown Dates

It's happening, folks! Though it seems like Hannah has spent most of her season of The Bachelorette arguing with Luke P., or arguing with the rest of the guys about arguing with Luke P., she apparently has also found time to form connections with a handful of her suitors, and said on the latest episode that she is "falling for multiple guys in totally different ways." So, who goes home on The Bachelorette Week 8? Three guys were sent packing, meaning four remain to accompany Hannah on the upcoming hometown dates.

Last week, after Hannah warned everyone to "stay in your lane," the guys showed a renewed focus on their individual relationships with her. But despite the number of times they repeated the driving-related phrase, Luke P. just couldn't help but look over into the car next to him, and got worked up about Hannah's (partially) naked bungee jumping date with Garrett. But despite pissing off Hannah not once, but twice, about his thoughts on the incident, Luke still got a rose, meaning the show's main source of conflict continued on into this week's episode.

This week, Hannah and the guys jetted off to Amsterdam, where Jed, Tyler C., and Mike were each granted one-on-one dates. First up was Jed, who was whisked away to experience Dutch chocolates and traditional dancing with Hannah. At dinner, Hannah revealed to Jed that though she has had a hard time opening up to the men, she is comfortable with him, and she revealed that she is falling in love with him. After a declaration like that, it's no shock that Jed ended up with the first rose of the episode, securing his spot for the hometown dates.

Also enjoying quality one-on-one time with Hannah was Tyler. The duo saddled up on horseback to explore another city in the Netherlands, the Hague. But it wasn't as romantic as it sounds: The horses were ornery, Tyler couldn't keep down a bite of pickled herring, and Hannah grew frustrated with him when she felt that he was not opening up to her. Luckily, things turned around at dinner, when he got real with her about his parents' divorce and the emotional impact it had on him. All the family talk must have inspired Hannah to want to meet them, because she offered her second rose to Tyler. Off to hometowns he will go.

The final one-on-one date card went to Mike, much to the despair of Connor, who had been growing increasingly upset about his lack of opportunities to connect with Hannah. In an effort to get in some extra face time, Connor snuck off to Hannah's hotel room for an impromptu one-on-one. Unfortunately, she told him his bold efforts were too little too late, and that she had developed stronger feelings for some of the other guys remaining. Connor was sent home without any date at all.

That nasty business aside, it was time Hannah and Mike met up for their date, which would go over super well, right? Eh. After kicking off the outing with a bike ride, they went to an art studio, where they took turns drawing each other, and then posed for a sexy couple's portrait. Later, on a bridge overlooking a picturesque canal, Mike told Hannah that he could see her as his wife. But later, Hannah showed up to the evening portion of the date already crying, and it quickly became clear what was coming. Uncomfortably, Hannah dragged the sad date into dinner, when she finally explained the reason behind her tears: She was sending Mike home. Somehow, Mike managed to comfort her through the breakup, though his heart was broken.

After the sob fest, Hannah was hoping for an easier time during the group date, which consisted of some QT with Peter, Luke and Garrett. Luke and Garrett both seemed to not be able to get over their issues with one another, while Peter was able to focus solely on Hannah. For that reason, Pilot Pete walked away with the first of the two group date roses.

Then, it came down to the two big rivals, Luke and Garrett. Both men went the extra mile to hold onto their chances of making it to the hometown dates: During one-on-one time, Luke opened up to Hannah about the religious awakening he had in the shower, showing a side of himself that Hannah, also a Christian, was drawn to. Garrett, for his part, somewhat casually divulged to Hannah, "You make me feel some type of way" and "I just can’t wait for you to meet the fam," before getting serious and dropping the big one, becoming the first guy in the season to tell Hannah those three important words: "I love you."

Hannah weighed out both options before ultimately going with the guy she believed really put his heart out there for her. Though she acknowledged that they have a complicated relationship, it was Luke P. who was chosen to stay.

Jed, Tyler, Peter, and Luke now get to prepare for their hometown dates... and judging by who is part of the final four, likely another dose of drama, too.