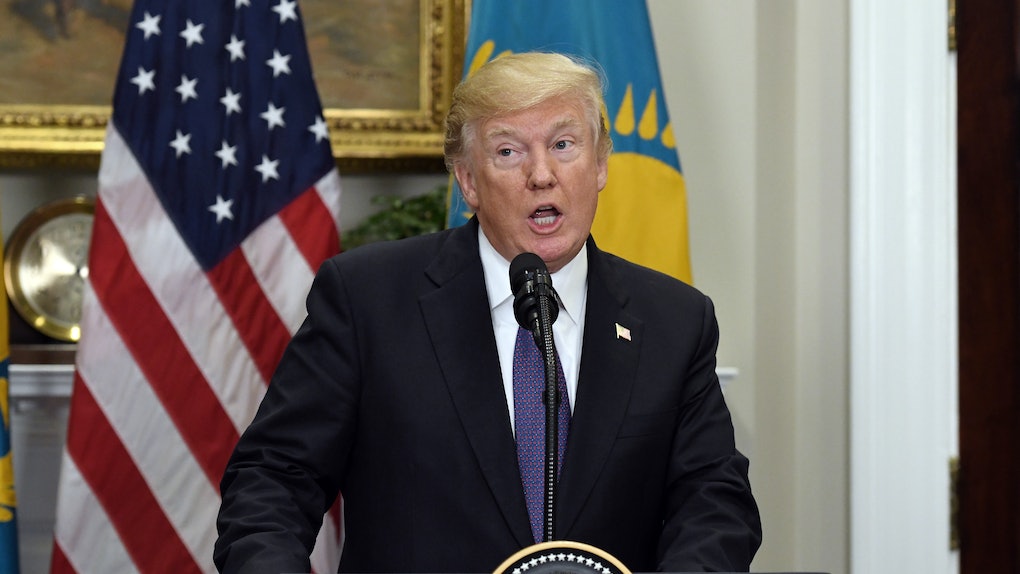 It's one of the age old questions in life: How come some people can eat terribly and have good health, but others can't? Thanks to President Donald Trump's latest physical exam, you don't have to look any further for the answer. The White House doctor says Trump can eat McDonald's and stay healthy because of "incredible genes."

That is, literally, the exact factor that presidential physician Ronny Jackson cited during a press briefing at the White House on Tuesday, Jan. 16. During the briefing, Jackson was peppered with all types of questions about Trump's health, some of which came from reporters who couldn't hide their surprise at news that the president has a clean bill of health.

The surprise is understandable, too, to be fair. Trump has never hidden his love for fast food, and loving fast food isn't exactly the healthiest habit in the world. So when ABC's Jonathan Karl bluntly asked Jackson how a guy who eats McDonald's and "all those diet cokes" (with little exercise) can be in good shape, the question was expected.

The answer given in return was a little less so.

"It's called genetics, I don't know. Some people have, you know, just great genes. I told the president that if he had a healthier diet over the last 20 years he might live to be 200 years old, I don't know." Jackson said, before contrasting Trump's genetic luck with his own. "He has incredible genes, I just assume. If I didn't watch what I eat, I wouldn't have the cardiac and overall health that he has."

There is a laundry list of occasions in which Trump has shared his eating habits publicly, like that time he listed, in detail, the fast food items he enjoys from different establishments. Big Macs and Quarter Pounders were among the favorites, FYI.

During the press briefing on Tuesday, though, Jackson said that the president has been changing his eating habits and that he'll be helping Trump eat better going forward.

"He's very healthy, despite those things, and I don't think he does that anymore" Jackson told reporters, referring to Trump's seemingly fast food heavy diet. "I mean, he's in the White House now. He's eating what the chefs are cooking for him now and they're cooking a much healthier diet for him now and we're gonna continue to work on that and make that healthier."

While Trump does indeed enjoy fast food, there's another factor that has clearly contributed to his good health, besides "incredible genes." The results of the president's medical examination, which were made public on Tuesday, highlighted parted of the reason why Trump is in "excellent" condition.

"The President's overall health is excellent," Jackson's summary of Trump's physical exam reads. "His cardiac performance during his physical exam was very good. He continues to enjoy the significant long term cardiac and overall health benefits that come from a lifetime of abstinence from tobacco and alcohol."

Like the summary says, Trump doesn't drink or smoke, a disciplinary habit that the president says he owes to his late brother, Fred Trump Jr. Back in October, during a press conference regarding the American opioid crisis, the president explain how his brother's fate impacted him.

I learned, myself — I had a brother, Fred — great guy, best-looking guy, best personality — much better than mine. But he had a problem. He had a problem with alcohol, and he would tell me, 'Don’t drink. Don't drink.' He was substantially older, and I listened to him and I respected, but he would constantly tell me, don't drink. He'd also add, don't smoke. But he would say it over and over and over again. And to this day, I've never had a drink. And I have no longing for it. I have no interest in it. To this day, I've never had a cigarette.

Clearly, that habit has had two benefits: good health, and the ability to maintain that good healthy in spite of eating a whole bunch of McDonald's.

If only we all could.

More like this
This Virtual Tour Of Starbucks' Costa Rica Coffee Farm Is An Immersive Experience
By Lara Walsh
Does Panera Deliver Near Me? Your Fave Soup & Sandwich Joint Just Expanded Its Options
By Daffany Chan
What Does Twizzlers' Mystery Flavor Taste Like? It'll Keep You Guessing
By Cianna Garrison
Stay up to date