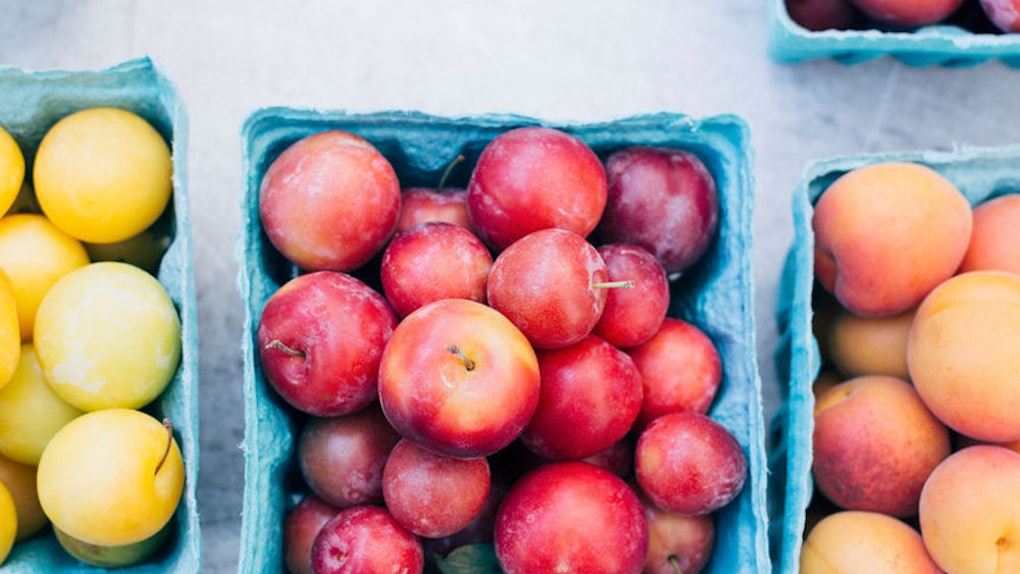 Which Fruits Are Being Recalled? Peaches, Nectarines, & Plums May Be A No-Go In Some Stores, FDA Says

I'll get right to it: If you picked up a fresh carton of peaches, nectarines, or plums during your last grocery store run, you might want to take a second to check the container before digging in. A recent fruit recall from Jac. Vandenberg, Inc. means that your juicy afternoon snack could possibly pose a threat to your health. Rest assured, though, your New Year's resolution to eat more produce doesn't have to fall entirely by the wayside.

Fruit distributor Jac Vandenberg, Inc. issued the recall on Jan. 24, which was then posted by the Food and Drug Administration (FDA). According to the FDA, 1,727 cartons of fresh peaches, 1,207 cartons of fresh nectarines, and 365 cartons of fresh plums were recalled for being potentially contaminated with Listeria monocytogenes. The warning states that no illnesses have yet to be reported as a result of this issue.

I know this already sounds kind of concerning, but FWIW, the potential contamination probably isn't too serious of a threat if you're otherwise healthy. According to the Centers for Disease Control and Prevention (CDC), this strain of Listeria is most likely to cause illness in infants, pregnant women, the elderly, and anyone whose immune system is not strong. For a fetus specifically, the infection could be serious or even fatal, as per the CDC.

If you're worried that you might have consumed some of the potentially contaminated stone fruit, watch out for symptoms such as fever and diarrhea. For those who are not pregnant, "Symptoms can include headache, stiff neck, confusion, loss of balance, and convulsions in addition to fever and muscle aches," according to the CDC. But if you aren't noticing any changes in your health, you're probably fine. "If you ate food possibly contaminated with Listeria and do not feel sick, most experts believe you do not need tests or treatment," the CDC guidelines explain. "Talk with your medical provider if you have questions about what to do after eating possibly contaminated food."

As per the FDA's recall announcement, the affected states include Alabama, California, Georgia, Illinois, Kentucky, Maine, Massachusetts, Michigan, Mississippi, New Jersey, New York, North Carolina, Ohio, Pennsylvania, South Carolina, Tennessee, West Virginia, and Virginia. ALDI, Costco, and Walmart are some of the retailers that may have received contaminated produce, but for a more thorough list, the FDA's announcement includes a list of specific recalls in each state.

If you've made a purchase that falls under the recall, the FDA suggests returning the container of produce to the store where you bought it for a full refund. "Consumers with questions may contact the company at compliance@jacvandenberg.com," the recall states, so make sure to reach out if you have any additional concerns.

Generally speaking, this is a great time to review some basic fruit safety tips, as outlined by the CDC. Washing, washing, washing is key here, folks. Use soap and water, and scrub your hands before, during, and after you handle food. Then, be sure to wash and scrub your fruit before you eat it, even if it's something that has a skin you won't eat, like an avocado or an orange. As per the CDC, peeling a contaminated piece of fruit could simply transfer any germs from the fruit to your hands to your mouth, so it's better to be safe than sorry here.

Additionally, when you think of foods that can't be left out on your countertops, meats and cheeses probably come to mind first, since they can spoil pretty quickly. But, according to the CDC, cut, peeled, or cooked produce should also be refrigerated as soon as possible (or at least within two hours) to reduce your risk of illness.

More like this
How To Make TikTok's Pizza Pull-Apart Bread For A Tasty & Shareable Snack
By Rachel Chapman
When Will Cricut's Mug Press Restock? You Don't Have To Wait Any Longer
By Rachel Chapman
TikTok’s Bell Pepper Sandwich Recipes Pack An ASMR-Worthy Crunch
By Kelly Pau
Stay up to date