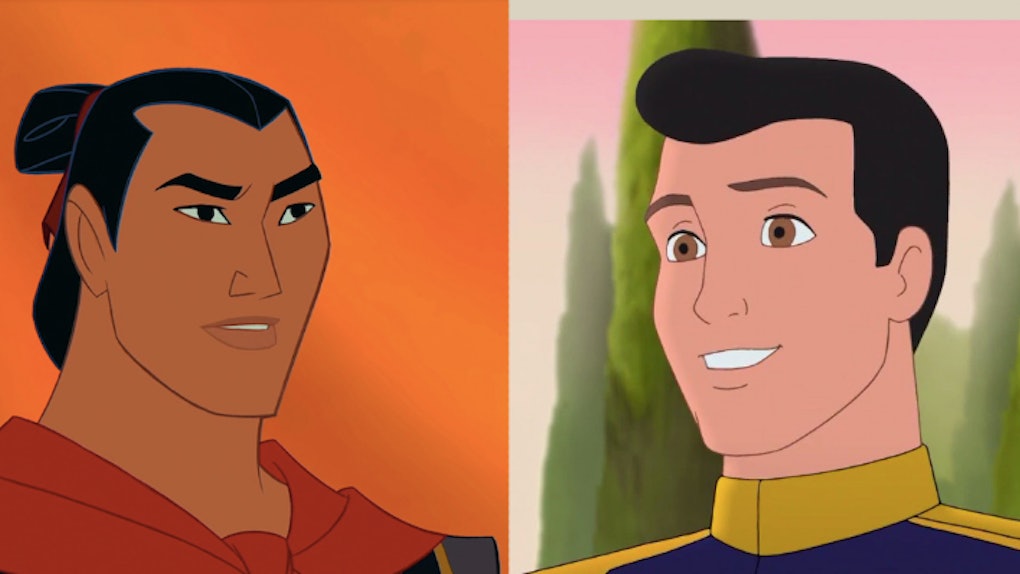 Which Disney Prince You'll Marry, Based On Your Zodiac Sign

As an adult woman who believes Disney led to her deeply mismanage her expectations in both love and life, I must deliver a few disclaimers before I embark on this super fun topic. First, marriage is societal construct, not a requirement for a happy life. Second, Disney princes are inherently flawed, less than feminist, and barely diverse/often guilty of cultural appropriation. Third, none of us are going to marry a Disney prince because they are animated drawings, so don't take these pairings too seriously.

That's actually a great rule of thumb when it comes to love and horoscopes in general: Don't overly stress your life partner's sign. Better to find a Cancer who is deeply in love with you and treats you like gold than wait around for a Pisces because you always thought you'd end up kissing a fish. (Or frog, see: The Princess and The Frog.)

But since we are talking Disney princes, let's have a little fun with your fictional love life. After refreshing my knowledge of the entire catalog of Disney films, I decided the best means of determining which signs match would match with which princes would be to assign each Disney prince a zodiac sign based on my personal opinion of their behavior in their respective films. (The Beast is definitely a Gemini.) Then, I matched them with compatible signs. Below, here's the definitive guide to which Disney prince you'd be happiest with, based on your sign.

Hey there, Aries. My magic lamp tells me that Aladdin is your perfect match. As a Sagittarius, he's a truth-seeker (hello, Genie!) and an explorer (carpet much?) and his adventurous nature is a perfect major for your energetic ways. Plus, Aladdin's hot! It's not his fault the movie he lives in is culturally insensitive, after all.

Prince Eric from The Little Mermaid is definitely a Virgo who desires stability and commitment — he doesn't want to date someone who has fins if he has to be stuck on land all of the time, you dig? This makes him a perfect match for you, Taurus, who is also all about what's practical. Now, kiss zee boy.

As a Gemini, you're a bit of a free spirit who's social and great at making friends, which makes you a perfect match for an equally unique and fun-loving Aquarius like Kristoff from Frozen whose best friend is a reindeer. Go build a snowman!

You're a Cancer, which means you are looking for someone whose intentions are to be with you, fair and square. That said, you're also a nurturer and one of the few signs that can really handle a Scorpio like Eugene from Tangled. True, he was a charming thief to begin with, but in actuality he's incredibly loyal to the person who can really empathize and care for him — you! (And your long hair!)

As a Leo lady, you're the queen of the zodiac signs and Simba from The Lion King makes for a perfect match. A royal duo! A regular Aries, Simba is confident and exuberant, and you need someone whose ego can match your own. Plus, he isn't afraid to put his life on the line for the people he loves, which you, as a Leo really appreciate. Rawr! Move over, Nala.

Li Shang from Mulan is not the most social at first, but he's a strong-willed leader and ends up being extremely dedicated to Mulan and protecting her once she saves his life. This means he's probably a Capricorn and an excellent match for your Virgo convictions and abilities to put things into action. Neither of you preach, you practice. Now "let's get down to business."

Let's face it, the Beast from Beauty and the Beast is as close to being two different people as they come. The Beast is most definitely a Gemini, which is perfect for you, Libra, because you both know how to garner new relationships and be social, but in very different ways. Loving your Gemini for who they are won't be difficult for you at all. Bonus: you get to hang out with Mrs. Potts and Chip.

Yes, the prince from Snow White is referred to as "The Prince." He's also pretty much down for whatever, because even though Snow White runs away from him, he falls in love with her and still comes to save her post-apple poisoning. What a Cancer! He's never going to instigate your Scorpio tendencies to get jealous, and protective. He's also cool with taking a back seat, which isn't a terrible thing for you when you want to hang out with your seven dwarves instead.

As a Sagittarius, you need a fellow explorer. Someone who will travel the world — or, the new world — with you. This makes a Gemini like John Smith perfect for your future plans. You're both dedicated to each other while also continuing to get outside your comfort zones and see new places. (Let's just forget that John Smith was based on a real, problematic person for the sake of this game, OK?)

Prince Charming from Cinderella is persistent... like, take-a-shoe-to-every-house-in-town-to-find-you persistent, which you, as a Capricorn, really appreciate. Prince Charming isn't creepy (right?) he's just practical. He's definitely a Taurus, and a person who is willing to put in the hard work for the happily ever after. He's your literal Prince Charming.

Prince Naveen is a charming, admired man about town. His general demeanor makes me sure he's a Leo, which is actually really great for your unique Aquarius-ness. Naveen also turns into a frog at one point, so he's probably looking for something very particular and special in a partner, which you definitely bring to the table.

Although it may seem weird that Prince Philip from Sleeping Beauty is yet another prince willing to kiss a sleeping girl without her consent, he actually knew Aurora from childhood, and is very empathetic and warm towards those around him. He's definitely a Cancer, and as a Pisces, that's exactly what you need — someone who has as much emotional depth as you. Don't sleep on this one!