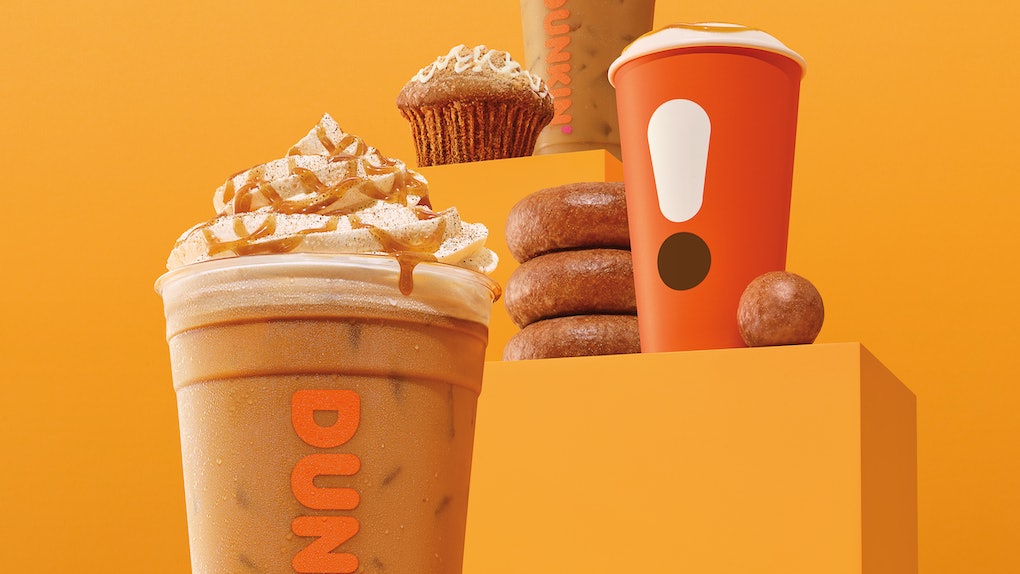 Where To Buy Dunkin's Pumpkin-Scented Munchkin Lip Balms, Because It's Almost PSL Season

If you're someone who believes that it's never too early for a little pumpkin spice latte action, then you'll be happy to hear that Dunkin' has officially announced it will begin rolling out its fall menu — along with the brand new Pumpkin-Scented Munchkin Lip Balms — on Wednesday, Aug. 14, in selection locations. So if you're wondering where to buy Dunkin's Pumpkin-Scented Munchkin Lip Balms, then allow me to provide you with the details.

In a press release sent to Elite Daily, the brand announced that you will be able to find the menu and the new lip balms in eight different cities around the United States. The kicker? The first letter of those select eight cities spell out the word "Pumpkin'," — with the apostrophe included.

The brand then went on to announce via its official Instagram page that the cities include Providence, Rhode Island; Upperco, Maryland; Marietta, Georgia; Pleasant Hills, Pennsylvania; Kissimee, Florida; Indian Trail, North Carolina; New York, New York; and Boston, Massachusetts. Boston is included as the apostrophe in the word "Pumpkin'" as that is where the brand is headquartered.

On Aug. 14, each of the participating locations will be rebranded from Dunkin' to Pumpkin', complete with all new exterior signage, festive pumpkin-themed decor, and will offer a free small hot or iced Pumpkin Coffee to the first 250 guests. What's more is that PSL-lovers can also cop the new Pumpkin-Scented Munchkins Lip Balm while supplies last.

You might remember back in April 2019 when the chain coffee shop subtly came out with the Donut Hole Lip Balms that, according to the brand, tasted like vanilla. And before that, back in 2017, the retailer released pumpkin spice-flavored lip balms that came in containers that looked just like Dunkin's hot coffee cups. So now, I imagine that the new Pumpkin-Scented Munchkin Lip Balms will be a fusion of the two, smelling and tasting like a vanilla-meets-pumpkin donut hole.

The OG Munchkin Lip Balms retailed for $5.99, so my guess is you'll be able to find the pumpkin-scented ones for around the same price. And while it's still unclear as to where you'll be able to cop the pumpkin-flavored and -scented lippies after Aug. 14, you can sign up to receive notifications on DunkinDonuts.com to stay in the know.

If you're not lucky enough to live near one of the eight stores that will feature the new menu and lippies on Aug. 14, then fortunately, you won't have to wait much longer for the new fall menu. And that's because one week later on Wednesday, Aug. 21, the retailer will release the entire fall menu at all remaining locations.

In addition to releasing the new pumpkin lip balm this fall, the Dunkin' will be adding a new donut flavor as well as a new latte flavor to the fall menu. That's right, in addition to Dunkin's long list of returning fall flavors that you already know and love, the brand will be releasing a Cinnamon Sugar Pumpkin Signature Latte, an Apple Cider Donut, and an Apple Cider Munchkin.

So, if you're someone that could sip on a PSL all year long, then luckily, you won't have to wait much longer to get your hands (or taste buds) on Dunkin's new Pumpkin-Scented Lip Balm and coinciding fall menu.

More like this
How To Get A Trendmood Box, AKA The Next Big Thing In Beauty Box Subscriptions
By Bella Gerard and Theresa Massony
This ONE/SIZE Turn Up The Base Foundation Powder Review Is A Must-Read
By Theresa Massony
Is Sephora Closed Due To Coronavirus? Here's How The Brand Is Responding To The Pandemic
By Theresa Massony
Stay up to date