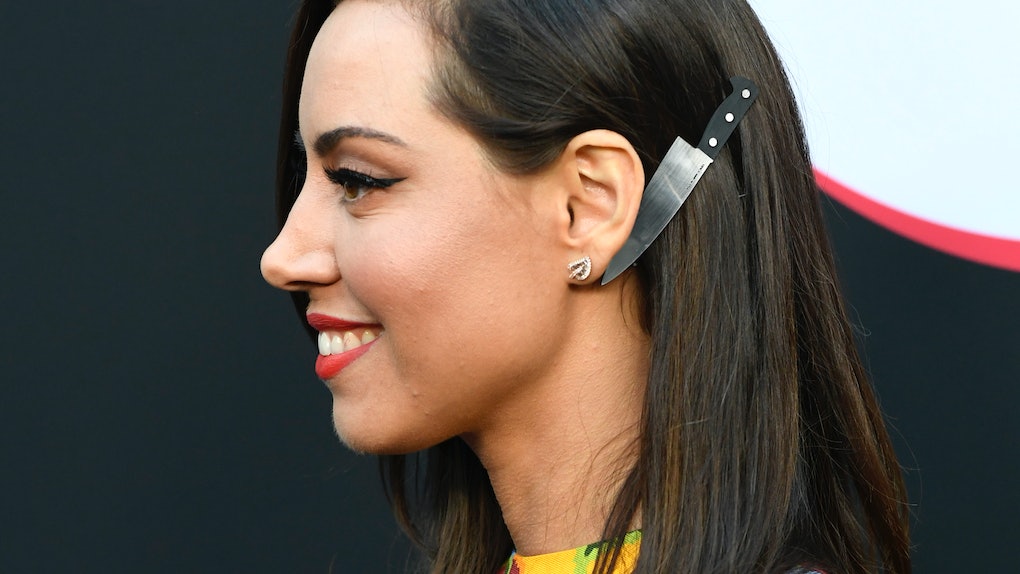 Where To Buy Aubrey Plaza's Knife Hair Clip, Because It Absolutely Slays

A certain hair style has taken the internet by storm today thanks to its especially sharp appeal, and if you're as into it as I am then you're probably wondering where to buy Aubrey Plaza's knife hair clip so you can recreate it at home. Talk about slay all day, am I right? Featuring a side part and lightly curled locks, the look centered on the portion of Plaza's hair that has been swept back behind her left ear and secured with the gleaming blade. The style brings a whole new meaning to the word fierce, and seeing as 2019 is the year of extra, it's exceedingly appropriate.

The style was created for the premiere of Child's Play, which is a modern remake of the classic 1988 horror film of the same name. In the movie, a young boy named Andy receives a seemingly normal doll from his mom upon moving to a new town. Not long after, things take a turn for the worse when the doll takes on a life of its own, embarking on a murderous rampage and terrorizing the small town in which Andy's family lives. Plaza plays the role of the mother in the film, so it makes sense she'd want to pay homage to the story at the red carpet premiere. To say she nailed it would be an understatement.

In an interview with Popsugar, Los Angeles-based hairstylist Clayton Hawkins, who created the look for Plaza, described the inspiration behind it. "Aubrey is so funny and obviously a comedic icon, but she's also classically beautiful," he shared. "I always try to find the middle ground with her where it's not just campy or boring beauty. Two weeks ago, when I was thinking about the Child's Play premiere, I was like 'OMG, what if I did a classic Hollywood blowout and had a tiny knife behind her ear?'" A creative genius? I think so. Hawkins' idea made Plaza the absolute star of the red carpet last night, and rightfully so.

She paired the knife clip with a bright yellow floral-print dress. Featuring billowing gathered sleeves, an '80s style belt, and a short structured skirt, it was a statement piece in itself. Dark green satin heels, a bright red lip, and, of course, the knife clip finished off the look.

If you're dying for a bladed barrette of your own, you're in luck. You can buy the exact clip Plaza wore at vincausa.com. Retailing for $32, the "Chef's Knife Hair Clip" is affordable AF and will play into your darkest beauty desires. "This barrette is a cut above the rest. Just don't wear it to the airport!" reads its cheeky product description.

The options of what you could do with this clip really are endless. Slide it in behind an ear to copy Plaza's look, use it to frame a slicked back ponytail, or pin it above your hairband securing a half-up, half-down style. No matter how you wear it, you'll be dressed to kill.