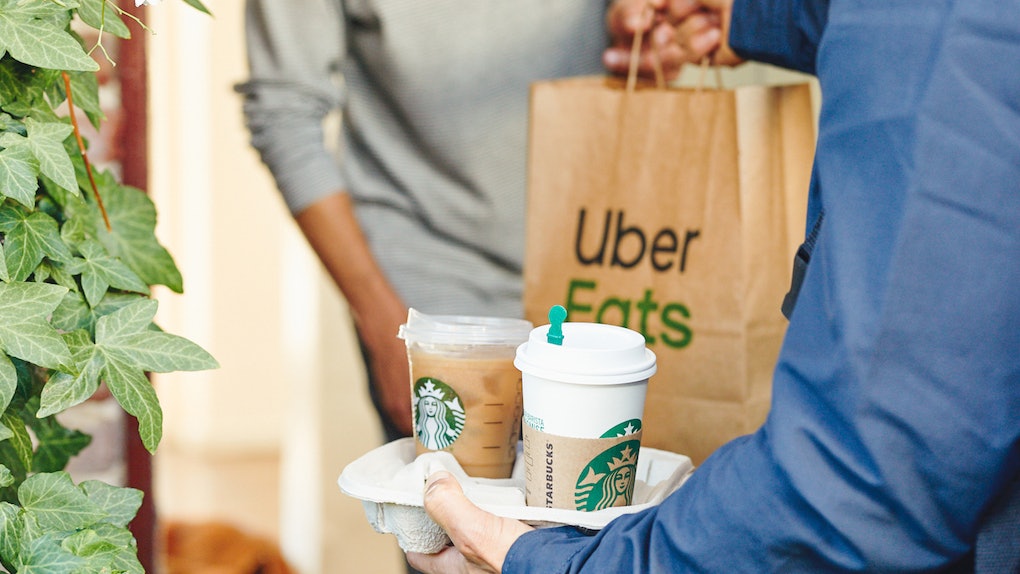 Where Does Starbucks Deliver Via Uber Eats? These New Cities Are Getting Access

If you're a dedicated coffee drinker (#guilty), then there's probably been a morning or two when you wished that Starbucks would bring a warm latte straight to your doorstep. If that's the case, rest assured that your morning daydream is about to come true. On Tuesday, Jan. 22, the coffee giant announced that six more cities are going to be added to its "Starbucks Delivers" initiative with Uber Eats. If you live in one of 'em, you'll be able to wake up to the smell of coffee without leaving your house. Now, you're probably asking yourself, "Well, where does Starbucks deliver via Uber Eats?" Get stoked, because some major cities are about to get the delivery treatment.

First, let's rewind a bit. If you currently live in Miami, Florida, news about Starbucks deliveries might not be too shocking. That's because the company initially tested its delivery service via Uber Eats in Miami last fall. Based off of the fact that six more cities will be added to Starbucks' delivery roster, I'm going to assume that the test went pretty dang well. According to the coffee giant, the upcoming cities include San Francisco, Chicago, Boston, New York, Los Angeles, and Washington, D.C. If you live in one of those areas, get your coffee order ready.

Now, you're probably wondering when those additional cities will have access to Starbucks Delivers. According to the company's press release, San Francisco will have access to deliveries via Uber Eats starting on Tuesday, Jan. 22. If you don't live in San Fran, don't fret; the remaining cities will be enrolled in the coming weeks, per Starbucks. With that being said, those living in seven U.S. cities will be able to order Starbucks once spring 2019 rolls around.

I'll cheers to that.

If you're looking forward to Starbucks deliveries, you're certainly not alone. Jason Droege, Vice President and Head of UberEverything, talked about the convenient service in Starbucks' press release. He said,

At Uber Eats, we’re always looking for new ways to offer people the widest selection of food they love. That’s why we’re so excited to deliver Starbucks fans their favorite food and beverages in a way that’s as easy as requesting a ride. Be it breakfast delivered straight to the soccer field or afternoon lattés to the office, we know this partnership will delight our customers.

Those of you who have (or will have) access to Starbucks deliveries might be wondering how to order your go-to sips. Thankfully, the process seems super easy. Since Starbucks Delivers is powered by Uber Eats, you can personalize and place your order on your Uber Eats mobile app. Then, you can track it straight from your phone. Sure, there will be an initial $2.49 booking fee — but that'll be worth it when you're sipping on your favorite latte from the comfort of your couch.

If you're curious about what you can order from Starbucks via Uber Eats, there are a ton of options to choose from (95 percent of the menu, to exact). Might I suggest the company's new Cinnamon Shortbread Latte? It's delicious.