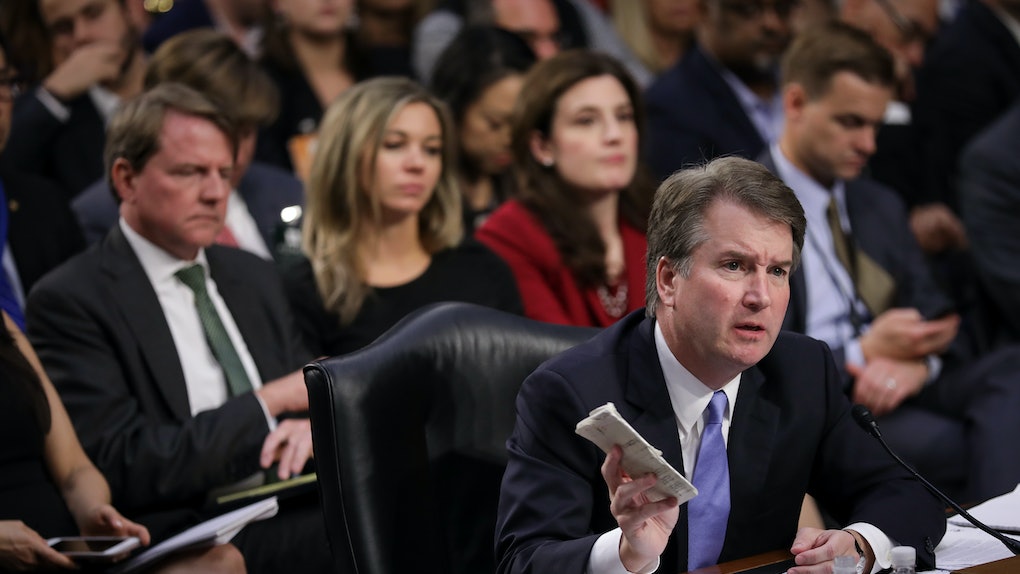 When Will The Senate Judiciary Committee Vote On Brett Kavanaugh? It's Been Delayed

The week of Sep. 3 marked the beginning of Supreme Court hopeful Brett Kavanaugh's confirmation hearings, and it's certainly been a wild ride. Even though we've all been on the edge of our seats on whether Kavanaugh will be confirmed as the next Supreme Court Justice, it turns out we might have to wait a little longer. So, when will the Senate Judiciary Committee vote on Brett Kavanaugh? Hang tight, folks.

According to The Hill, the Senate Judiciary Committee has pushed their vote on Supreme Court nominee, Brett Kavanaugh, until Sept. 20, after the committee voted 11-10 to hold the vote until 1:45 p.m ET next Thursday. Their vote isn't the final step, however — the committee's vote decides on how to recommend Kavanaugh (good, bad, or neutral) to the Senate as a whole, which will make the deciding vote. While this may prolong the overall confirmation process, the decision wasn't necessarily surprising since any member of the committee can delay a nomination once it appears on the agenda. Although anticipation has been building among the public leading up to the formal vote, Democrats like Sen. Dianne Feinstein are not in a rush to make such an important decision. During the committee business meeting on Thursday, Sept. 13, Feinstein noted more time would be helpful to make a thorough and complete assessment of Kavanaugh's nomination.

"I think taking the time and really being able to make the assessment that are needed to be made is really critical and important," Feinstein said.

Democrats on the committee have been enormously critical of what they have called insufficient time to review his record as a judge, as well as the level of secrecy around documents concerning him. On the evening of Sept. 2, 42,000 pages of documents concerning Kavanaugh's time in the George W. Bush White House were released for review, only a few hours before his hearing started on Sept. 3. "For the record, that is a rate of 7,000 pages per hour,” Sen. Sheldon Whitehouse of Rhode Island said at the start of the hearing, in reference to how fast Senate aides would have had to read the documents in order to review them all. “That is superhuman.”

"We are rushing through this process in a way that is unnecessary," added Sen. Cory Booker of New Jersey.

It's safe to say that Kavanaugh didn't have the smoothest start to the weeklong ordeal, especially since a number of protestors had to be escorted out of the room as a result of disruptive outbursts. However, once the hearing actually started rolling that's when things certainly got interesting.

On Thursday, Sept. 6, Texas Sen. Ted Cruz asked Kavanaugh about a dissent he made in regards to the Priests for Life v. Department of Health and Human Services case, a ruling which dealt with religious rights and birth control and challenged the Affordable Care Act (ACA)'s contraception mandate. In his question, Cruz asked the nominee to explain a little more about the dissent he wrote about the case, which prompted Kavanaugh to refer to birth control as a "abortion-inducing drug," which, uh, it's not.

The question was first, was this a substantial burden on their religious exercise? And it seemed to me, quite clearly, it was. They said filling out the form would make them complicit in the abortion-inducing drugs that they were, as a religious matter, objected to.

As the hearings finish and the Senate Judiciary Committee meet next week to vote, Kavanaugh replacing former Supreme Court Justice Anthony Kennedy could actually become a reality. If confirmed, it's needless to say that Kavanaugh will be quite a different Supreme Court justice compared to Kennedy, who served as a swing vote in favor of major decisions concerning abortion rights and a woman's right to choose.

Even though I hate to be kept waiting, a little more time to make such an important decision may not be such a bad idea. Take all the time you need, committee members.