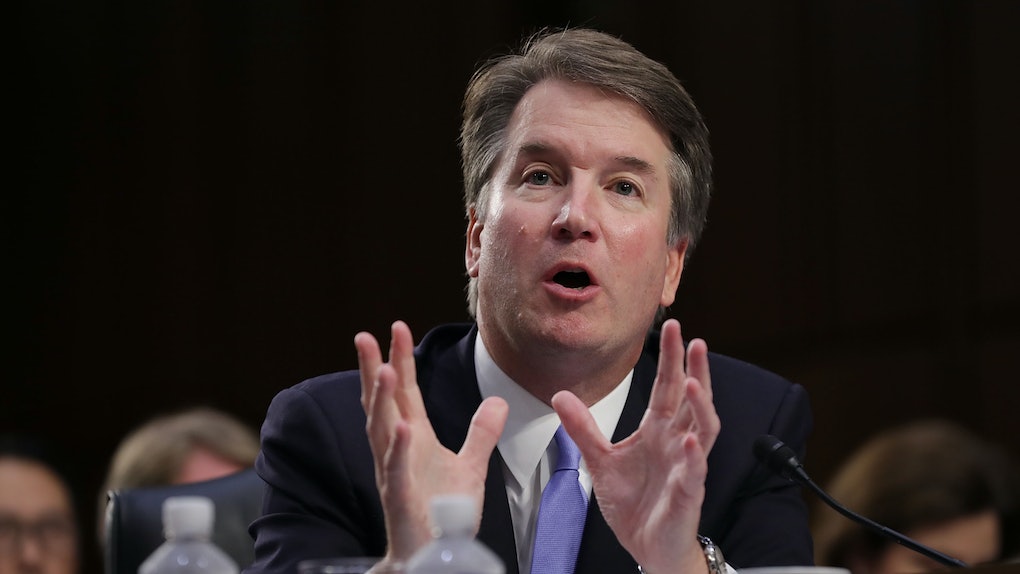 Brett Kavanaugh Called Birth Control An Abortion-Inducing Drug, Which, No

Brett Kavanaugh's Supreme Court confirmation hearings have been a wild ride from the start. After starting off the questioning sessions by refusing to say whether or not he considered the legal right to abortion irrevocable, he followed up with some very questionable statements on birth control. In fact, on the third day of his hearing before the Senate Judiciary Committee on Sept. 6, Kavanaugh referred to birth control as an "abortion-inducing drug," and, uh, there are a few problems with that.

Kavanaugh's answer on Sept. 6 was responding to a question from Sen. Ted Cruz, who asked him about a dissent he made in the ruling on religious rights and birth control case Priests for Life v. Department of Health and Human Services. The case, which later was combined with several others to go before the Supreme Court, was a challenge to the Affordable Care Act (ACA)'s contraception mandate, as well as the form of workaround for religious employers who objected to providing insurance coverage for contraception. Kavanaugh's D.C. Circuit Court ruled in favor of the Obama administration in the case, but Kavanaugh himself dissented from the ruling.

"You wrote a dissent," Cruz asked, "in the Priests for Life case. Can you tell the committee about that?" Kavanaugh answered,

The question was first, was this a substantial burden on their religious exercise? And it seemed to me, quite clearly, it was. They said filling out the form would make them complicit in the abortion-inducing drugs that they were, as a religious matter, objected to.

Elite Daily reached out to Kavanaugh's D.C. Court office for clarification on his answer and phrasing, but did not immediately hear back.

The petition that Priests for Life filed before the Supreme Court in June 2015 specifically cited the ACA's "contraception services mandate" and the requirement that the organization, as a non-exempt religious employer, facilitate "coverage for contraception, sterilization, abortifacients, and related education and counseling."

However, contraception and abortion-inducing drugs are, medically speaking, very different. According to a 2013 legal brief from the medical group Physicians for Reproductive Health in the related Sebelius v. Hobby Lobby case, contraceptives "prevents fertilization of an egg or prevents implantation of a fertilized egg – in other words, it prevents a pregnancy from taking place." Similarly, emergency contraception works to prevent a pregnancy from occurring after sex by interfering with ovulation or fertilization. On the other hand, the definition of an abortion-inducing drug is unequivocal: "An 'abortifacient,' by contrast, works to terminate a pregnancy, which necessarily occurs after an embryo has implanted in the uterine lining," the brief reads.

Reproductive rights groups called out Kavanaugh's phrasing as indicative of attempts to equate birth control with abortion and restrict access to both. "[The statement] is not only an anti-science lie, it's an anti-choice extremist phrase that shows that our right to access both abortion and contraception would be in SERIOUS danger if he is confirmed," NARAL Pro-Choice America said in a tweet.

Kavanaugh's views on abortion and reproductive rights in general have been a point of high contention as he moves through his Supreme Court confirmation hearing, given that President Donald Trump has promised to appoint Supreme Court Justices who would work to overturn abortion rights in America. Though Kavanaugh has declared he thinks landmark abortion rights case Roe v. Wade is settled law, old emails recently revealed have cast doubt on that assessment, leaving reproductive rights advocates disturbed.

Though Kavanaugh's not yet on the bench, things are starting to get serious for birth control advocates.