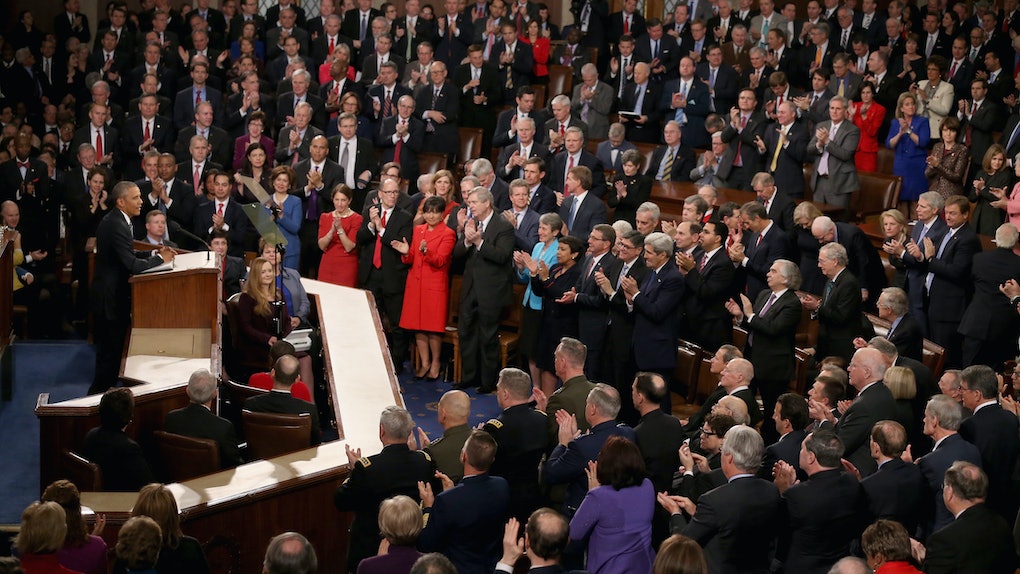 When Is The 2018 State Of The Union? Trump's First "SOTU" Is Coming Soon

It's almost that time of year where the leader of the free world makes a highly publicized speech to let us know how well we are functioning as a country. We don't need a State of the Union (SOTU) address to know that we perhaps aren't doing so well, but it's going to happen regardless. For those that are wondering when the 2018 State of the Union address is, President Donald Trump's first SOTU is scheduled for 9 p.m. ET on Tuesday, Jan. 30.

Trump will give his address in the House chamber of the U.S. Capitol in Washington D.C. alongside Vice President Mike Pence and House Speaker Paul Ryan. On Nov. 30, 2017, House Speaker Paul Ryan officially invited Trump to present his State of the Union address before a joint session of Congress. In a statement, Ryan said, "The new year will bring an opportunity to take account of the progress we have made but also lay out the work that still remains to be done on behalf of the American people."

Members of the House and Senate, the president's cabinet, and justices of the Supreme Court will be in attendance to hear the speech, but not all of them. Five House Democrats, including civil rights icon John Lewis, Frederica Wilson, Maxine Waters, Pramila Jayapal, and Earl Blumenauer have all announced their intent to boycott Trump's State of the Union in spite of is his recent alleged references to Haiti and African nations being "sh*thole countries." Rep. Wilson from Florida told The Tampa Bay Times,

I have no doubt that instead of delivering a message of inclusivity and an agenda that benefits all Americans, President Trump's address will be full of innuendo, empty promises, and lies. For the first time since I began serving in the U.S. House of Representatives, I will not be attending the president's State of the Union address.

Rep. John Lewis from Georgia said on ABC's This Week, "In good conscience, I can not and will not sit there and listen at him as he gives the State of the Union address." Earlier this month, Rep. Earl Blumenauer said he would opt out of the SOTU "rather than listening to yet another destructive and divisive speech by Trump."

In addition to the absence of a few House Democrats, a group of female Democrats, led by Congresswoman Jackie Speier, are planning to wear black on Jan. 30 and are inviting other members of Congress to do the same. The members of the Democratic Women's Working Group are wearing black to make a statement about sexual harassment in politics and to show solidarity with the #MeToo and #TimesUp movement.

The Democrats are truly setting the tone for a unique State of the Union address, but so is the recent government shutdown. On Jan. 22, Democratic and Republican senators reached a temporary deal to reopen the government after three days of shutdown, just in time for the SOTU, although a vote still has to go through in the House. A White House official told Politico that the theme and tone for Trump's upcoming speech was “in flux” because of the shutdown. Trump's speechwriters had already written key parts of the speech, but after the shutdown, they were reconsidering changing the language because the shutdown was so focused on partisan issues. Considering the shutdown happened in such close proximity to his first SOTU, Trump will likely praise his administration for achieving a bipartisan compromise with Congress.

However, the peace in Congress appears to be only temporary. Upon news that the Senate had voted to end the government shutdown, an NBC reporter tweeted, "House Minority Leader Nancy Pelosi and House Minority Whip Steny Hoyer told House democratic leaders they plan to vote against the CR funding the government to February 8th." It seems that compromise is not as close as we thought.