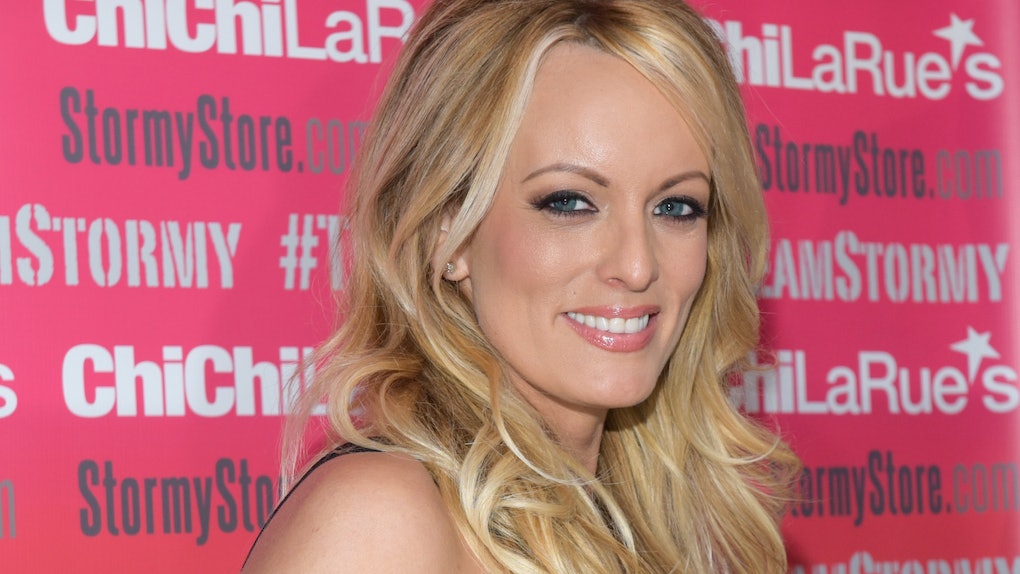 When Is 'Full Disclosure's Release Date? Stormy Daniels' Book Is Sure To Bring A Tempest

Start clearing some space on your shelves, because your stack of books about President Donald Trump is about to have a new title added to it. Stormy Daniels is joining the club and releasing her very own tell-all book, called Full Disclosure, about Trump. Just in case you wan't to mark your calendars, you might need to know when is Full Disclosure's release date? Get ready, Daniels is ready to ring in a Stormy fall just (you see what I did there) before the midterm elections in November.

The official release date of Daniels' book is Oct. 2, less than a month out from when Daniels first announced it during an appearance a Sept. 12 appearance on The View, according to Politico. Daniels told The View's panel that the book will go into depth about her relationship with Trump and the night they allegedly spent together back in 2006 — which Trump denies. Even though Daniels talked about her history with Trump during her 60 Minutes interview with Anderson Cooper back in March, she doesn't think that it fully covered the extent of her story. Daniels said,

Everybody knows that a lot of the 60 Minutes [interview] was cut down for time and there are things that I said in my interview that I really wanted people to know that are very important to me that I didn’t get to say.

Daniels revealed that she has actually been working on Full Disclosure for the last decade, meaning it's not just about Trump but also about her personal life and career. She said,

I've been working on a book for about 10 years, so I just sort of melded everything together. I've kept notebooks of the adventures I've had on the road and in strip clubs and stuff. It will blow your mind.

While the book might be more of a memoir than a hammer meant to come down on Trump's White House, it's still sure to cause a stir. Daniels' book is just the latest in a slew of tell-all books from Trump insiders, which have been dropping like flies in 2018. While Michael Wolff kicked it off with Fire and Fury back in January, the trend didn't end there. In August Trump's former confidant and aide Omarosa Manigault Newman dropped her tell-all, Unhinged, which took direct aim at Trump and his White House. Most recently, acclaimed journalist Bob Woodward released his book Fear: Trump in the White House, a deep-dive into Trump's administration which includes claims that the White House staffers are trying to curtail the impulses of their commander in chief. In a statement, White House Press Secretary Sarah Huckabee Sanders called the book "fabricated stories ... told to make the President look bad." Elite Daily reached out to the White House at the time for further comment, but did not hear back.

Unsurprisingly, Trump was not at all happy with any of these books and is taking the stance that the claims in all of them are fabricated. Following news of Woodward's book, Trump sent out a series of tweets trying to discredit it. In a Sept. 4 tweet, Trump said Woodward "made up" the quotes and that Fear is a "con on the public." Trump tweeted,

The Woodward book has already been refuted and discredited by General (Secretary of Defense) James Mattis and General (Chief of Staff) John Kelly. Their quotes were made up frauds, a con on the public. Likewise other stories and quotes. Woodward is a Dem operative? Notice timing?

Given Trump's denial of an affair with Daniels, coupled with how he's reacted to other tell-all books about him, I think it's pretty safe to say that he's not going to be too happy come October. Happy reading, everyone!