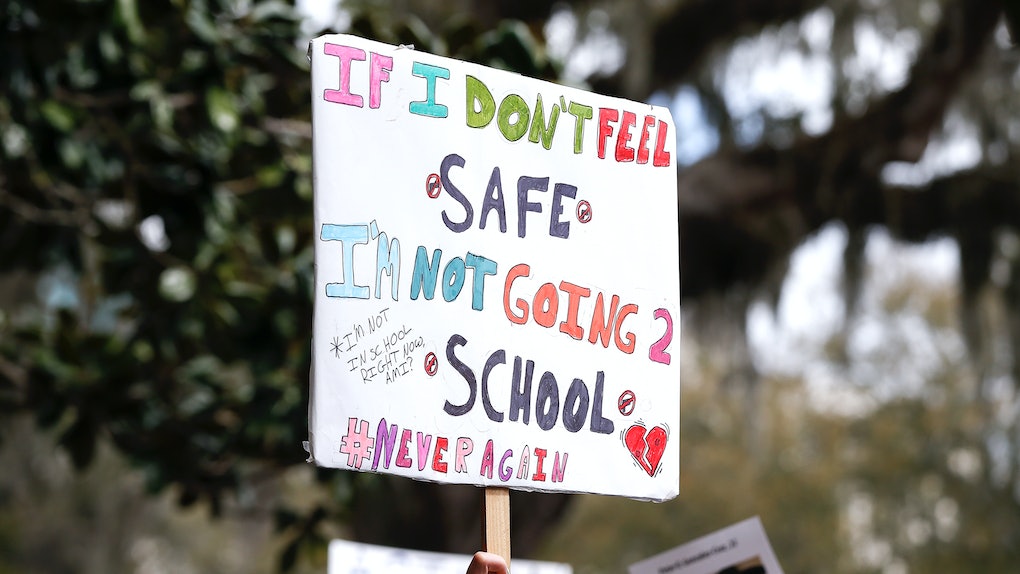 When Does The March For Our Lives Start? Here's When To Show Up

Following the Feb. 14 shooting at Marjory Stoneman Douglas High School in Parkland, Florida, student activists have decided they will no longer settle for government inaction on gun control. So they mobilized towards change and organized the March For Our Lives, a protest on for, D.C. to demand that the government stop being lax on guns and start making moves towards solid gun reform. If you want to take part in this history-making event you might need to know, when does the March For Our Lives start?

The official March For Our Lives will take place on Saturday, March 24 in Washington, D.C. It will begin at 12:00 p.m. at Pennsylvania Avenue NW, and 3rd St. NW. But if you can't make it to D.C., there will be "sibling marches" in cities across the country. Each event has its own details and start time, so if you're interested make sure to check the March For Our Lives page to find sister marches to find all of the specific details of your local march. Also, you can head to the page to register if you would like to participate in the march.

The whole event is being organized by survivors of the Parkland shooting, which left 17 students and teachers dead on February 14. Since the tragedy, the students have been active and vocal in calling for changes to gun control legislation on the national stage, participating in a televised town hall and speaking out on social media, among other actions. And this month's march is the next piece of that. According to the March For Our Lives mission statement,

March For Our Lives is created by, inspired by, and led by students across the country who will no longer risk their lives waiting for someone else to take action to stop the epidemic of mass school shootings that has become all too familiar. In the tragic wake of the seventeen lives brutally cut short in Florida, politicians are telling us that now is not the time to talk about guns.

The statement continues, "Every kid in this country now goes to school wondering if this day might be their last. We live in fear."

Parkland students spoke to CNN immediately after the tragedy, and it was very evident that they were using the traumatic experience to fuel their fight forward. "What we need is action," survivor David Hogg said. “We are children. You guys are the adults. Work together, come over your politics, and get something done.”

Following that call to action, the student survivors started to mobilize and become activists for gun reform. They were going to make sure that their voices are heard and that change is on the horizon.

On the heels of the Parkland tragedy, the surviving students announced the March For Our Lives. On Feb. 18 in an interview with ABC News, Cameron Kasky, a high school junior and Parkland shooting survivor, explained that it's time to take action. He expressed how he and fellow students feel unsafe in school and neglected by the government. He said,

People are saying that it’s not time to talk about gun control, and we can respect that. Here’s a time: March 24. In every single city, we are going to be marching together as students begging for our lives. This isn’t about the GOP. This isn’t about the Democrats. This is about the adults. We feel neglected. At this point, you’re either with us or you’re against us.

Kasky expressed the same sentiment during an appearance on CNN, "We are losing our lives while the adults are playing around," he said.

March For Our Lives is about children crying out and letting the people in charge know that it's not about politics — it's about change. And these students know that the time for change is right now.