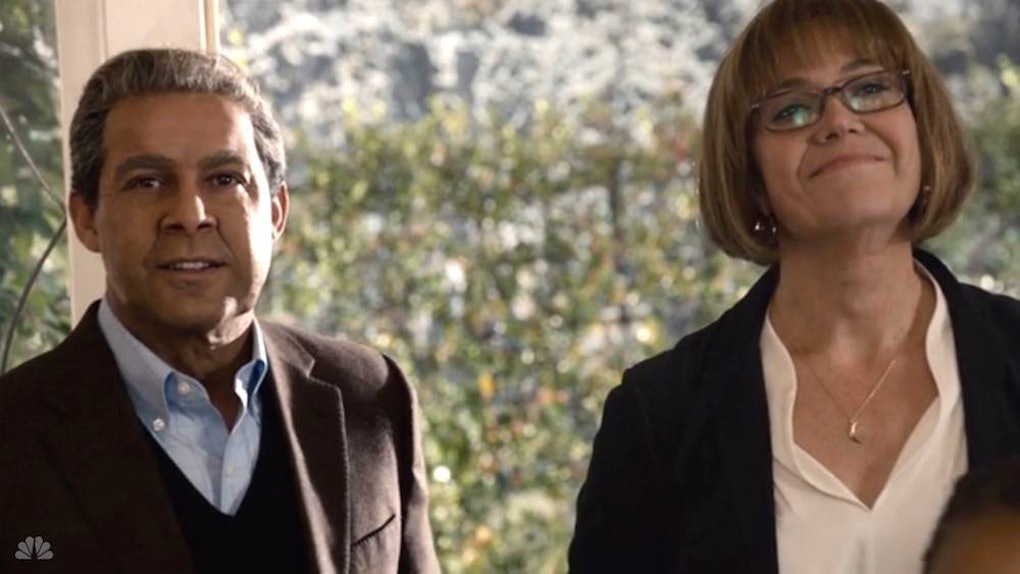 When Did Rebecca & Miguel Get Married On 'This Is Us'? We Finally Got More Info In Season 2

This Is Us fans finally have something to blame for the show's most fan-reviled relationship: Facebook. Tuesday night's Halloween episode finally revealed to fans how Rebecca Pearson and her dead husband's best friend reconnected and started seeing each other after Jack's death. We now know that like many long-lost acquaintances, Rebecca and Miguel reconnected on Facebook on This Is Us. The news also gives fans a some more illumination on when everything in the complicated Pearson family's past takes place.

The new, sixth episode of the second season of This Is Us transports viewers to an era of flashbacks we have not seen yet: 2008, when Kevin, Kate, and Randall are all in their 20s and Rebecca is seemingly alone following Jack's death. But Rebecca says she is ready to start reconnecting, and even enlists Beth's help to set up a Facebook account. That's right — Rebecca Pearson is the original "your mom just joined Facebook"! Although she initially joins the site so she can check up on her kids and share pictures of her new grandkid (more on that later), she quickly learns the true meaning of social media as Miguel slides into her DMs. OK, so it was a comment on a photo of her grandkid, but that's close enough to the DMs.

Earlier in the episode, Beth gave birth to her and Randall's first daughter, Tess, at home on Halloween, and Rebecca had a mini-breakdown in the kitchen over it. Although it was a beautiful moment, Rebecca told her son that she was crying because she was not able to share it with Jack. But that bittersweet moment did lead to Rebecca reconnecting with Miguel at the end of the episode. We see Rebecca posting a photo of newborn Tess on her brand-new Facebook page, and the first comment comes from Miguel, who asks how she's been.

Before that moment, we really didn't have much clue about when Rebecca and Miguel became a thing. Initially, viewers assumed they might have gotten together right after Jack's death, which drew a lot of animosity towards the pairing very early on. But as the show has continued, it became more clear that Rebecca and Miguel were just friends while Jack was alive, and now we know they actually didn't develop a romantic connection until long after his death. In fact, we now know that the two had not even spoken to one another in the nearly decade following Jack's death up until Rebecca sets up her Facebook account in 2008.

The new reveal also tells us that Miguel is a much newer addition to the Pearson family than fans may have thought before now. If Rebecca and Miguel were only just starting to talk to one another again in 2008 (and the very end of 2008, for that matter), then they most likely did not get married until maybe a few years after that, maybe around 2010 or 2011? Obviously, there's still nothing to go on as to when exactly Rebecca and Miguel get married right now other than it happened between 2008 and the present day, but if they waited a traditional amount of time before saying their "I do's" then they may only be married for around five or so years in the present day storyline.

The other major milestone in Tuesday night's new episode was the birth of Beth and Randall's first daughter, which he decided to name Tess after a ceiling fan. OK... We found out that Beth gave birth to Tess at home on Halloween because all the streets were closed down for the holiday, and also that apparently childbirth is just a super-simple, painless, 3-second process for Beth.

It will definitely be interesting to see if This Is Us shows us more of the Big Three in their twenties moving forward!