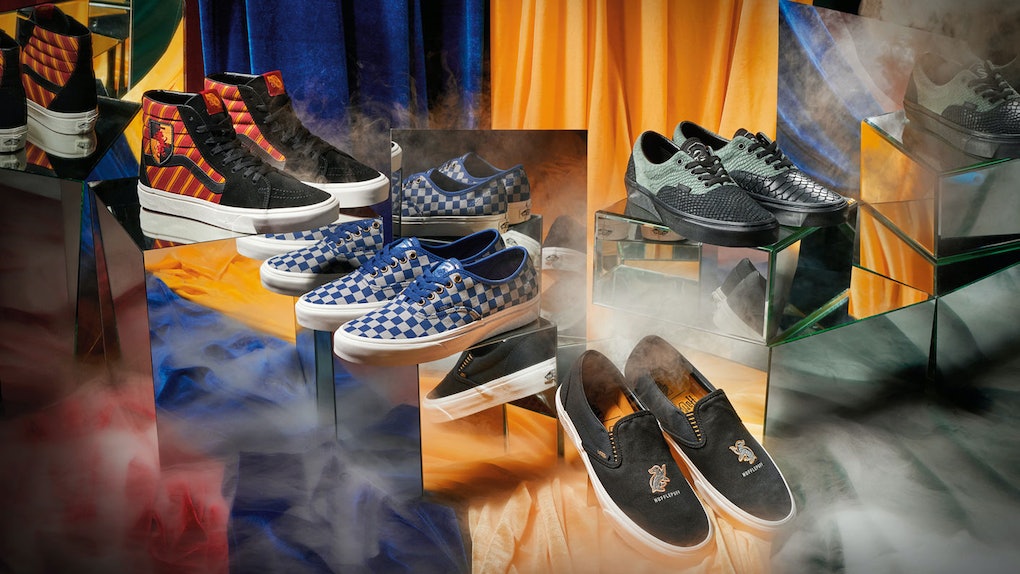 What's In The Vans x 'Harry Potter' Collection? These Sneakers Are Almost As Good As A Hogwarts Acceptance Letter

According to a press release sent to Elite Daily on Monday, May 13, the Vans x Harry Potter collection will feature four different colorways, each in a different classic Vans silhouette. Each colorway is inspired by the four houses from Hogwarts School of Witchcraft and Wizardry meaning there will be a Sk8-Hi for Gryffindor, an Era for Slytherin, Authentic for Ravenclaw, and the Classic Slip-On for Hufflepuff.

But that's not all, a representative for Vans also told Elite Daily that in addition to the four original shoe styles announced on May 13, fans can also look forward to a few more additional styles as well as men's and women's apparel and accessories. That's right, by the summertime you'll be able to get your hands on shoes and merchandise inspired by your favorite book and movie series.

On the same day that the Vans press release was sent, the brand also took to their Instagram to post a carousel of four images, each one representing the house of Hogwarts that inspired the Vans x Harry Potter collection. There was a yellow and black Hufflepuff image, a green and black Slytherin image, a blue and gray Ravenclaw image, and a yellow and red Gryffindor image.

So while it's still unclear on exactly when and where Harry Potter fans can get their hands on the new Hogwarts merch, rest easy knowing that by this summer HP-lovers will be able to get shoes and merch inspired by their favorite movie and book series at Vans retailers all over the world.

The Vans brand is no stranger to delivering collaborations with some of your favorite movie characters, musicians, and artists alike. In the past year alone we've seen the Vans x David Bowie Collection, the Vans x Ashley Williams collection, and the Vans x Mickey Mouse collection all hit (and fly off of) shelves, and now, Harry Potter-lovers can join in on the fun by sporting their favorite Hogwarts house on their footwear.

So while we patiently wait for a confirmation on when exactly the Vans x Harry Potter collection will be available, Vans encourages witches and wizards to sign up for notifications surrounding the drop via their website. And in the meantime while you wait on your Hogwarts sneakers to drop, be sure to check out every other collection of Harry Potter-inspired merch like Boots' Harry Potter makeup collection.

More like this
The 2021 Met Gala Is Reportedly Still Happening
By Margaret Blatz
Amanda Gorman's 'Vogue' Cover Shows The Poet In Her Natural Form: A Goddess
By Margaret Blatz
'Harry Potter's NYC Flagship Store Includes Photo Opps & A VR Tour Of Hogwarts
By Rachel Chapman
Stay up to date