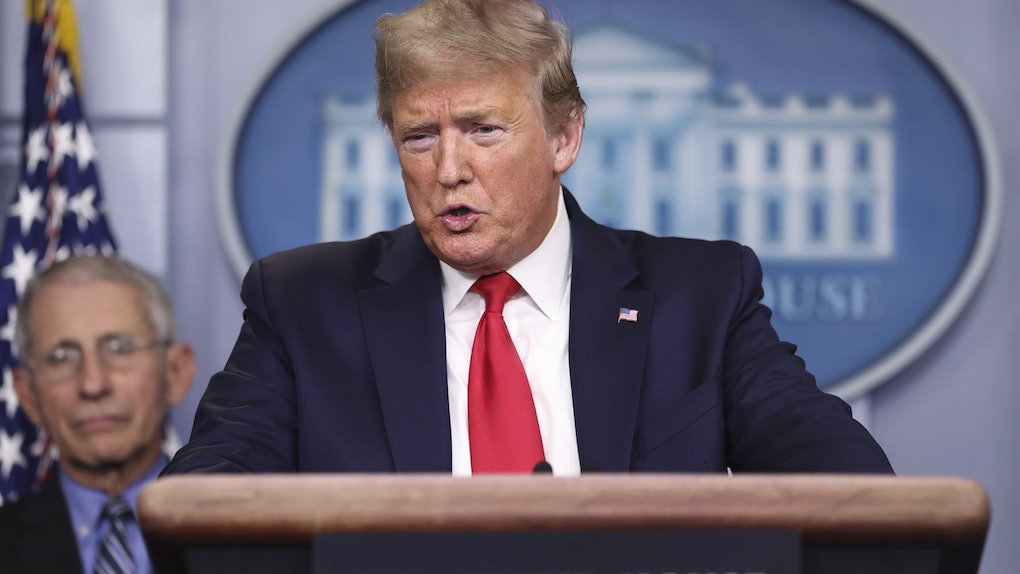 What's In The Coronavirus Stimulus Plan? Here's How It Could Affect You

With more than 50,000 confirmed coronavirus cases across the United States as of Wednesday, March 25, and numerous restrictions on residents' movements, workers and businesses across the country have been demanding action from their elected officials to ease financial strain. In the early hours of March 25, Senate leaders and the White House reached an agreement on a $2 trillion stimulus package to support individuals, states, and businesses. What's in the coronavirus stimulus plan? According to The New York Times, it would be the largest stimulus measure in modern history, if it is enacted.

The stimulus package is expected to quickly pass through both the Senate and the House of Representatives on Wednesday, per The New York Times, after which President Donald Trump is expected to sign it. House Speaker Nancy Pelosi praised the package on Wednesday, per The Hill, but indicated that House Democrats still needed to review it. When Senate Majority Leader Mitch McConnell announced the deal that Senate leaders had struck with the White House over this stimulus package, he described it as a "wartime level of investment into our nation."

Although the full text of the stimulus package isn't yet available, the agreement is broad in scope, and contains measures like direct payments to taxpayers, increased unemployment benefits, emergency loans for small businesses, conditional government bailouts for companies, and financial assistance for hospitals. According to CBS News, it took senators five days of intense negotiations to reach an agreement about the stimulus package.

The direct payments to taxpayers may be the biggest point. According to CNN, lawmakers agreed to send $1,200 to individuals making less than $75,000 per year, although taxpayers will likely have to wait until at least May to see the checks. The stimulus package also allows for $2,400 to married couples making less than $150,000, and $500 for each child under the age of 17. The payments get phased out for anyone making more than $75,000, and eligibility is based on your 2018 taxes (or your 2019 taxes, if you've already filed them this year).

The stimulus also includes measures to keep businesses and the general economy afloat, and basically make sure people have jobs to come back to. Included under the plan are $367 billion in loans for small businesses who pledge to keep their workers, as well as $500 billion in conditional bailouts for larger industries like airlines and hotels. The latter was a point of contention which delayed agreement on the stimulus, as Democrats and Republicans argued about terms and oversight of the bailouts. Companies that benefit won't be allowed to buy back their stock, and businesses belonging to the Trump family or other senior government officials aren't eligible. The legislation also adds an oversight board to review the bailouts.

Perhaps most importantly, the stimulus includes $100 billion in emergency grants to hospitals and medical workers who are caring for coronavirus patients, per The Washington Post. The package would also provide billions more in funding to cover protective equipment, ventilators, testing supplies, Medicare payments, and housing for patients. It also gives about $150 billion of federal funding to state and local governments dealing with the impact of the coronavirus pandemic, per Vox, including $8 billion for tribal governments.

It's important to note that while Senate leaders and the White House may have reached an agreement over this broad stimulus package, it has not yet been passed by Congress or signed by Trump. In the past week, negotiations on the Senate floor have involved shouting matches, accusations of partisanship, and other arguments. Nevertheless, the stimulus package is expected to pass both the Senate and the House relatively quickly, The New York Times reported, and Trump is expected to sign it.

More like this
The More Contagious B-117 COVID Variant Is Now The Most Common Strain In The U.S.
By Rhyma Castillo
Is Sephora Closed Due To Coronavirus? Here's How The Brand Is Responding To The Pandemic
By Theresa Massony
These Tweets & Memes About Matt Gaetz's Venmo All Make The Same Joke
By Cianna Garrison
Stay up to date